SBS spoke with the Norwegian mediator who helped broker the historic agreement between Colombia and the FARC rebel group.

The Norwegian diplomat was celebrating the end of more than four years of work as Special Envoy to the Peace Process in Colombia.

With his diplomatic team and partners from Cuba, Nylander mediated tense, emotional and lengthy talks which appear to have ended one of the world’s longest running civil wars – the five decades of violence between Colombia’s government and the leftist guerilla group, FARC.

The conflict has seen more than 220,000 Colombians killed, hundreds kidnapped and children armed with lethal weapons. The violence has left the country deeply scarred – most don’t remember a time when their country was not at war with itself.

But over more than five years – if you count preparatory discussions held in secret – negotiators from FARC and the government looked each other in the eye as they searched for resolution.

“A connection on a human level was established very quickly,” Dag Nylander told SBS. “Being Colombians with a shared history and a shared purpose helped greatly.” Second in command and leader of the delegates of FARC, Luciano Marin Ivan Marquez, and Norwegian Special Envoy to the Peace Process in Colombia Dag Nylander.
EPA/ERNESTO MASTRASCUSA

Football was an early icebreaker he said, with both sides cheering together for the national team.

But those relationships were tested, and success was never guaranteed.

“When the peace process was announced it was supposed to be a quick one, limited in time,” one Colombian diplomat told SBS.

“What was supposed to be a two year process became a four year one, so people started to get a little bit nervous.”

“Our President put all his political capital in this peace process – knowing that negotiating with FARC is not very popular – and his approval ratings are very low,” they said. “People who know the president say that his obsession is to leave a county in peace, and with this accord he gets very close to that.” Colombian President Juan Manuel Santos (C) holds a copy with the final text of the peace agreement with the Revolutionary Armed Forces of Colombia (FARC).
AFP

President Juan Manuel Santos’ decision to plough through with negotiations hasn’t been without critics, he faced strong opposition domestically, including from former president Alvaro Uribe.

“Narco-terror is being rewarded in Colombia,” the former leader wrote in the Wall Street Journal, slamming the agreements’ amnesties for human rights abuses and drug trafficking. Colombia is ending the world’s longest civil war, but a plebiscite could undo everything

The parties’ ongoing focus and commitment was vital for getting through the tougher times, Nylander told SBS. At several points it was events outside of the negotiating room that looked like they were going to tank the talks.

FARC kidnapped an army general in 2014. The talks were suspended until his return two weeks later.

Several months later a FARC attack killed 11 soldiers and ended a unilateral ceasefire. The outbreak of violence from both sides killed more than 50 – including a FARC negotiator – but the talks continued. “That particular moment was difficult for all. There were a high numbers of victims on both sides in a short time-span, including people who had been part of the process,” Dag Nylander said.

“There was a level of personal grief, disappointment and a fear that the process was over and that a return to a full-fledged conflict was unavoidable,” he said. “Fortunately, reason prevailed and the parties were able to agree on a number of measures for deescalation in the field allowing for dialogue at the table to continue.

“Thanks to maturity and a stable and well-designed process, all of these crises were overcome."

The Colombian government has now asked both the US and the EU to remove the FARC from their lists of designated terrorist organisations.

The way the talks were designed have been praised again and again. It was the first thing Nylander mentioned when asked what he thought led to the negotiations’ eventual success.

1. Government agricultural rural development policy (a key cause for the Marxist rebels)

2. Political participation (rebels have been guaranteed seats in congress for several years)

3. End to the conflict: Disarmament and reintegration

4. Ending participation in the narcotics trade

5. Redress for victims (a truth commission has been established, along with amnesties)

6. Provisions for implementation, monitoring and verification

That well-prepared structure – a roadmap for progress – was key, Nylander said.

“Both sides remained focused within the framework laid out,” he said. “Bold leadership within the parties was important - and that was backed by broad support internationally, and active, supportive civil society within Colombia.”

“Parties decided early to put the victims at the centre of the talks,” Nylander said. Victims' groups were able to attend some sessions, and made submissions to the parties.

Colombian victim of the armed conflict Angela Maria Giraldo and Jose Antequera during a press conference on August 16, 2014, in Havana.
YAMIL LAGE/AFP/Getty Images

Kyle Johnson, senior Colombia analyst for the International Crisis Group, has been watching the talks closely. He said that strong leadership and a commitment to the talks on the part of the government was crucial.

“Any deal signed with the FARC could be seen as courageous, as a big part of Colombian society was going to reject the agreements no matter what,” he said.

Some aspects of the deal are particularly brave. FARC will transition into a political party, with guaranteed seats in congress and an amnesty for designated crimes if rebels confess.

“Both are necessary for the peace deal to be a peace deal,” Johnson said, “but nonetheless, they face stiff opposition and always will.” Negotiations over giving up arms and finding redress for victims were particularly difficult.
Getty Images

Finding a solution which resolved issues of justice, accountability and forgiveness was particularly difficult, Johnson said. Outside experts recommended systems of truth and reconciliation, which have been employed in other conflict zones.

Under the plan, the nation, and the families of victims, will hear confessions and admissions to murder, extortion, kidnapping and attacks – but many crimes are covered under an agreed upon amnesty.

The country’s mixed reaction to those provisions in particular has shown that while many want resolution to the conflict, scars still run deep. The announcement of the deal was an emotional moment for many in the country.
AAP

For members of the FARC, the idea of willingly giving up their weapons also runs counter to everything they’ve believed in.

“Their weapons are essentially all they have to negotiate, and without them, in the past, members of the group have been killed in extreme numbers,” Johnson said. “These are existential issues for the FARC.”

If the agreed plan is successful, FARC rebels will emerge from their jungle strongholds and lay down their arms under the supervision of UN observers, police and the Colombian army.

Those particular sensitivities – on both sides – meant that secrecy and discretion in the early stages was critical, Johnson said.

“Fairly secret negotiations, with little participation from civil society or outside actors, in a foreign country helped tremendously,” he said of the talks, held in Cuba.

“While eventually certain groups – victims and ethnic groups – did have to participate somehow, controlling that was key,” he said. 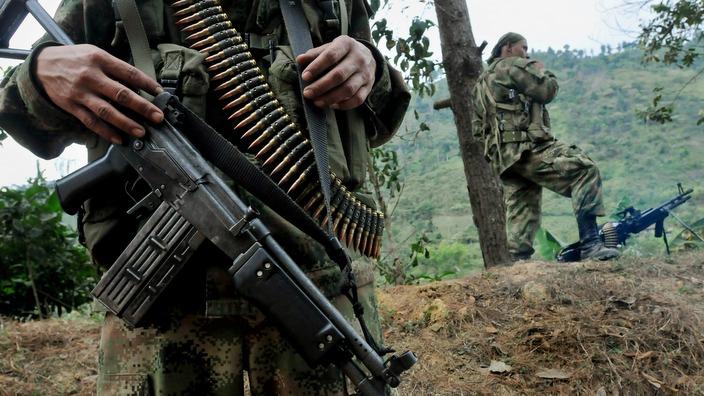 FARC fighters will emerge from their camps and lay down their arms under the peace plan.

Johnson also said the role of the Norwegian team and the Cuban delegates was crucial.

“In tough moments, they were able to bring the parties together and push them towards a solution, applying pressure when necessary,” he said. “Having trustworthy, third party people sitting at the table was essential, and will be in the future.”

Nylander has also praised his Cuban counterparts, noting that they carried tremendous credibility with both the Colombian government and FARC. “Among the guerrillas, the ELN has agreed on a framework agreement with the government, but this has yet to materialise,” Nylander said. “The opening of formal talks scheduled to start in Quito as soon as possible.”

“The ELN has issues with the reached agreement with the FARC, but they are supportive of the FARC’s efforts,” he said.

While the government may have invested the entirety of its political capital into the deal, it will face perhaps its biggest hurdle in just a matter of weeks.

On October 2 Colombians will take part in a national plebiscite to ratify the deal.

No one knows what will happen if it fails.

“It is a kind of do-or-die moment,” Kyle Johnson said. “If the agreements are not approved, essentially, the most likely option is going back to war.”

“Though the government said that and it sounds like a threat, it is right,” he said. “There is a case to be made – it has not been made – on a philosophical level for voting no, but once you add in the consequences of doing so, it falls apart.” FARC commander Edilson Romana arrives at the Convention Palace in Havana for peace talks with the Colombian government, on March 5, 2015.
YAMIL LAGE/AFP/Getty Images

For Dag Nylander, the agreement means a great deal. Years of his life have been invested in the process, and his interest in the peace process pre-dates his role as mediator.

“I have always had a fascination for Colombia,” he told SBS. “I worked side by side with Colombians in the UN Security Council in New York 2001.”

“I would often run into the SRSG for Colombia, James Lemoyne, who was engaged in trying to save the then faltering process with the FARC and President Pastrana,” he said.

After his time in New York, Nylander left foreign affairs altogether and spent several years working as a judge in a small village in northern Norway. One day, the Ministry of Foreign Affairs called and asked him to head up the embassy as chargé d'affaires.

“It was difficult for me to say no that that offer,” he said. “Ever since I have been closely engaged with or in Colombia.”

“When a new possibility opened up with the FARC in 2010/2011 after the election of Santos, it was a natural continuation work, further building on the presence and activity of Norway within peace and reconciliation in Colombia dating back many decades,” Nylander told SBS.

The Norwegian diplomat is firmly enthusiastic about the agreement.

“This is the best deal possible. It is a balanced result, respecting the Colombian institutions and democracy,” he said. “It is a historic achievement – a big opportunity for Colombia to end more than five decades of conflict.” The Maldives is tearing itself apart A brief history of the Syrian War Five strategies to stopping a war, according to the ICG

Australians prepare to leave coronavirus-hit cruise ship, but some choose to stay behind