In Fiji, 95 per cent of adults have now received one dose of a COVID-19 vaccine and 45 per cent are fully vaccinated. This is how they got there and why the country's chief health officer Dr James Fong concedes coronavirus is here to stay. 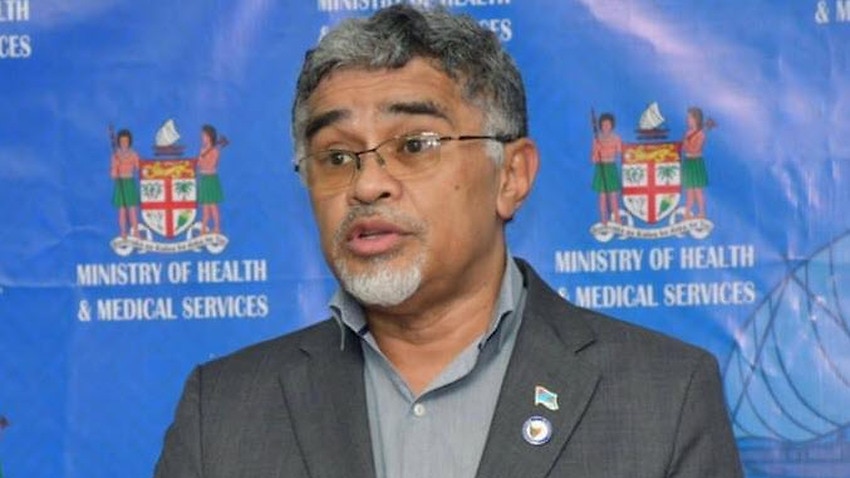 Every afternoon for months on end, the permanent secretary for Fiji's Ministry of Health and Medical Services would follow the short but well-trodden path from his desk to the conference room.

He was the man in charge of the daily coronavirus briefings that were live-streamed across the country, and the health expert tasked with spearheading Fiji’s COVID-19 response.

But Dr James Fong, an obstetrician by trade, is now a household name in the island nation.

Speaking to SBS News from the capital Suva, he said after a year of Fiji remaining largely COVID-free after the virus was first detected in China, he knew it would eventually reach its shores.

"I had always said to the public that the virus will break though; there is no way that it won't,” he said.

“We don't have the ability to prevent it from coming. If it doesn't come through the front door, it will come through the back door or another door. There is no way we'll be able to stop it."

And he was right.

Following a quarantine breach in April, the Delta variant found its way in and took hold of the capital.

Since that superspreader event, Fiji, with a population of about 900,000 people has recorded more than 46,000 cases and more than 400 deaths.

By comparison, Australia, with a population of about 25 million has recorded 56,000 cases and more than 1,000 deaths.

Over the past few months, the Fijian government implemented a range of lockdowns and curfews to help stop the spread, but Dr Fong said case numbers kept exploding.

Lockdowns and containment zones have been used to curb the spread in Fiji's central division. Source: AFP

"Many people were living in very crowded places and it’s very difficult for us to rely on a planned lockdown to eliminate the virus.”

“The lockdown program was beginning to impinge on access to food and other amenities, so we had to change course."

Fiji is still recording case numbers well above 100 every day, but hospitalisation rates have steadily declined.

Dr Fong attributes that to the country's high vaccination rate, with nearly the entire adult population having received at least one dose - the vast majority of which are AstraZeneca supplied by the COVAX initiative and the Australian and New Zealand governments.

Dr Fong got his vaccination in March.

The Minister for Health this afternoon received the COVID-19 AstraZeneca Vaccine.

Fiji is planning on vaccinating under 18s in the near future and is hoping to procure more supply of Pfizer and Moderna.

Dr Fong said vaccinating everyone is Fiji's best defence against COVID-19 and he is the first to admit getting back to zero cases is no longer realistic.

"We feel that the disease will be endemic,” he said.

“We will have to use the vaccine to provide a means to slow down the spread within the community, and a means to protect the vulnerable from severe outcomes."

While number of cases has dropped on the main island of Viti Levu, Fijian authorities are now concerned about the spread of COVID-19 on its smaller, remote islands.

Dozens of new infections have been recorded on Kadavu, Malolo and Naviti, where health facilities are scarce.

At the weekend, more than 50 health workers were deployed to the islands by boat. The teams will assist with containing any further spread of the virus and provide care for those who need it.

The team left Suva for Kadavu to assist with the COVID-19 response on the island. Source: Fijian Government

Sanaka Samarasinha is the United Nations resident coordinator in Fiji. He said it's vital authorities get any regional outbreaks under control early to avoid potential disaster.

"It's relatively easy to deal with serious cases in the central and western divisions [of Fiji] because you have the facilities and hospital,” he said.

“It's far more difficult when you’re talking about the eastern division, the maritime zones, where you have to evacuate people by air or it takes days to go by boat."

"In the process of taking the vaccines over there, you don't want to take the virus too,” he said.

“It's something that's quite delicate, given how transmissible the Delta variant is. We want to be sure we take the right precautions when people are going out there."

Dr Delasau Surgeon at CWM and his team hiked for 5 hours on foot whilst their equipment was a carried on horses to visit Nakida the village of the Yavusa Navucu in Nagonenicolo. They did COVID surveillance and vaccinations and even treated other ailments. #LeavingNoOneBehind pic.twitter.com/RNJkJCFkm4

But the government believes the benefit outweighs any risk and is determined to double vaccinate everyone in Fiji as soon as possible - including those who live in very remote villages.

Dr Fong said strong vaccination uptake will help determine when the country can regain a sense of normality.

"There is talk of opening up; a lot hinges on our coverage rates.”

To add to the urgency, cyclone season is only months away. Fiji had two category five cyclones in 2020 - and there's likely more on the way this summer.

Mr Samarasinha called it “a crisis on top of a crisis.”

He and his team at the UN have already begun preparations to make sure health and emergency infrastructure is ready.

“Given the structures people live in, the likelihood of major catastrophe is very very high, so that's what we're ramping up, getting the message across that these are the things people can do to keep themselves safe.”

He said the best thing the country can do in preparation is to have everyone vaccinated.

“The idea is that we can get people vaccinated, two doses of the vaccine, before the cyclone season."