A surge in Vietnamese immigration to Australia after the Vietnam War was the first test for multiculturalism after the White Australia Policy ended.

More than 80,000 Vietnamese people moved to Australia in the decade following the Vietnam War, many as refugees.

Thursday, April 30 marks 40 years since the North Vietnamese took the South’s capital of Saigon and renamed it Ho Chi Minh City after their former nationalist leader.

Fewer than 700 Australians reported Vietnam was their birth place in the 1971 census but that number grew to more than 80,000 15 years later.

The influx of Vietnamese people to Australia came just after the Whitlam government removed the last elements of the "White Australia Policy" in the 1970s.

The term White Australia Policy refers to a series of laws that prevented people from outside Europe immigrating to Australia, starting with the Immigration Restriction Act 1901. Australia, thanks for making pho and Cabramatta trendy

That law required immigrants to take a dictation test in any European language until the test was removed in 1958.

The Racial Discrimination Act 1975, which made racial discrimination illegal, came into effect during the last month of the Whitlam government.

In the seven years ending in 1982 Australia accepted close to 60,000 Vietnamese refugees, most via plane.

While more than 2000 Vietnamese people came to Australia in unauthorised boats in the seven years following the fall of Saigon, many more started their voyages but were killed at sea.

A 1982 news article said one 17-year-old woman was raped by seven pirates and then set afloat in a basket. Two days later she was picked up by another boat, raped, and set afloat again before she was finally rescued by a friendly vessel.

Many who stayed in Vietnam after 1975 faced harsh treatment in camps similar to the USSR's Gulag camps, the late professor of political science Rudolph J Rummel wrote in 1997.

Prof Rummel estimated the Vietnamese government killed one million people and potentially many more in Vietnam, Cambodia and Laos between 1975 and 1987.

Despite the hardships of Vietnamese people in their voyages to Australia, some Australians harnessed negative public sentiment towards the mass intake of refugees.

Several ministers of parliament and some newspapers labelled Vietnamese arrivals as queue jumpers, who were accused of carefully planning their stories to attract sympathy. Chasing the Dragon: Return to Vietnam

'I had to flee to survive'

Tuong Quang Luu was as a senior diplomat for the Republic of Vietnam (South Vietnam) before the fall of Saigon.

His affiliations meant it was dangerous for him to stay in Vietnam after 1975.

“I had to flee to survive. There’s no question whatsoever that I would have been captured by the communists and placed in a concentration camp, and would not survive,” Mr Luu said.

When Saigon fell Mr Luu disguised himself in black clothes, which the communist militant group the Viet Cong commonly wore, to avoid capture as he fled to the coast.

Most people who fled Vietnam did so for political reasons, Mr Luu said.

Despite the pressing situation for Mr Luu and many others who fled, refugees moved to an environment of negative public sentiment.

“The White Australia Policy had been abolished. The public opinion had not been turned around,” Mr Luu said.

He said Australia’s political leadership in the years following the Vietnam War meant Australia could change.

“The policy of the Fraser government was a very courageous one and very visionary,” Mr Luu said.

He said many in Australia, including church leaders, academics and some elements of the media supported the government in its stance, despite public opinion.

“If you conducted a survey of the general public, it would not have been in favour of resettlement of a large number of people in such a short space of time,” he said.

Mr Luu did not receive abuse or discrimination, although some Vietnamese refugees did.

Today, Vietnam is a major country of origin for Australia’s estimated residential population who were born overseas.

Finding work was problematic because of barriers like language and culture.

Mr Luu is now retired in Australia and was formerly the head of SBS Radio.

'My family's from Saigon'

Cam Nguyen came to Australia in 1975 after her husband worked for the former South Vietnamese government.

She returned to Saigon for the first time three years ago.

"I would never call it Ho Chi Minh City."

When Ms Nguyen visited she saw many statues commemorating the service of the former northern communist soldiers, but no memorials for South Vietnamese soldiers.

She said the monuments were common, even in smaller population centres.

When the Nguyens came to Australia, they went to Melbourne.

Today the Melbourne suburbs of Springvale, Footscray and Richmond are centres of Vietnamese business and culture.

“In the late 1970s the Richmond commercial street was full of Italian and Greek businesses, which had closed,” Ms Nguyen said.

"Vietnamese new arrivals could afford to rent, or buy those shops.

"That’s why Richmond became a hub of Vietnamese business.”

Ms Nguyen founded and currently heads up the Australian Vietnamese Women's Association (AVWA), which is believed to be the largest provider of services to Vietnamese people in the entire diaspora.

Vietnamese immigration to Australia has continued for four decades, which Ms Nguyen said was partially so families could be together.

“The pull factor is that people know that life is good in Australia, the community is multicultural and young people want to come here to study and make a life for themselves.”

“There is also a push factor of human rights in Vietnam. The current government rates rather poorly in the scale of respect for human rights,” Ms Nguyen said.

Last year, Human Rights Watch said there were an estimated 150-200 political prisoners in Vietnam, including 63 people who were convicted by politically-controlled courts in 2013.

The most recent Freedom in the World report from Freedom House said Vietnam was getting tougher on free speech, in a country that bans human rights organisations. 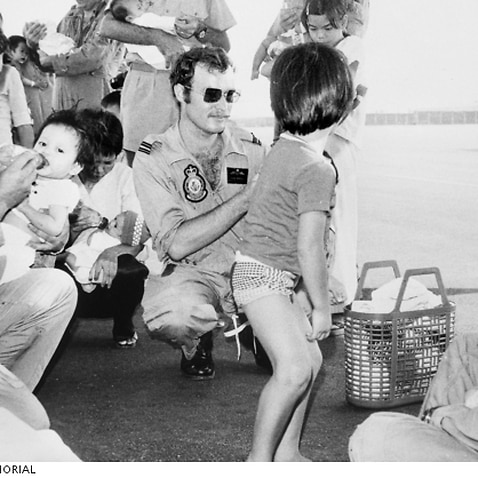 From Saigon in a shoebox: Australian 'Operation Babylift' orphans reflect 40 years on

Fleeing Vietnam, 15 years after the war

Bich Thuy Pham came to Australia as a refugee in 1990.

Her family worked for the South Vietnamese government before 1975, but 15 years later the Pham family still faced discrimination at the hands of the communists when she left for a refugee camp in Malaysia.

The communist government stopped her family from working or going to university, because of their affiliations with the former government, she said.

Watch Dateline on Tuesday night to see the story of two brothers who go back to Vietnam in search of answers, from 9.30pm on SBS One.