As Australian organisations rally to support recent evacuees from Afghanistan, uncertainty remains for those on short-term visas with no clear pathway to permanent resettlement. The government says an update is on its way. 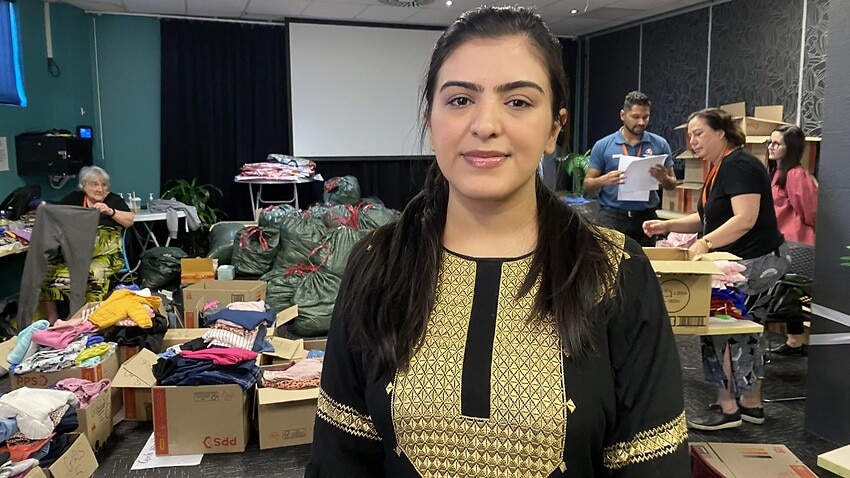 With the help of volunteers, Brisbane refugee resettlement agency Multicultural Australia has been sorting through a growing pile of donations.

There are clothes, shoes and toys, all destined for Afghans who have recently been evacuated to Australia following the Taliban takeover in their homeland.

Some gifts though, seem more practical than others.

“There was one box of tall silver shoes," says the agency's CEO, Christine Castley.

"Well, they're probably thinking once people settle down, people are probably going to have events to go to,” says Sanam Ahmadzada.

Some of the donations received by Multicultural Australia. Source: Stefan Armbruster/SBS News

Ms Ahmadzada came to Australia from Afghanistan more than a decade ago as a refugee. She has helped spearhead the donation drive in co-operation with Multicultural Australia, the success of which caught her by surprise.

"I just assumed that it will be some friends sharing with a few other friends, and collecting some donations through their work or little networks,” she says.

“I didn't realise how big it was."

Ms Castley says they have been overwhelmed by the "generosity and warmth of the Queensland community”.

“On day one there were cars down the street outside; people had come through really rapidly.”

Australia evacuated 4,100 people from Kabul during the recent crisis, and over the past few weeks they have been emerging from hotel quarantine, some to begin new lives in Australia.

But uncertainty for many refugees remains, with their short-term visas giving no clear pathway to permanent resettlement.

The hurried nature of the evacuations meant most people were given temporary visas. Many received a Temporary Humanitarian Stay visa (subclass 449), which lasts for three months.

Australian citizens and visa holders evacuated from Afghanistan are assisted off their flight. Source: DEPARTMENT OF DEFENCE

The visa allows access to Centrelink and Medicare, but once the visa is granted, visa holders cannot leave Australia.

Those on 449 visas also cannot apply for a permanent humanitarian visa - only a temporary extension - the longest of which is up to three years.

It’s an issue former army veteran and lawyer Glenn Kolomeitz has had to grapple with during his efforts to return about 400 visa holders to Australia.

“It gives these people a lack of certainty, and obviously, a lack of permanency in this country," he says.

He's also assisting clients holding 449 visas who are still in Afghanistan and desperately trying to re-establish a lifeline out of the country.

Their efforts to renew their visas have been complicated by the chaos that has ensued across the country and the withdrawal of western nations, Mr Kolomeitz says.

“There's no Australian embassy in Kabul - or there hasn't been since May, effectively. There's no effective postal service from Kabul.”

“How can these people print these forms anyway? We've been doing that for them, as their agents, as their lawyers.”

“Expecting them to lodge any other form of humanitarian visa from Afghanistan is a nightmare."

Mr Kolomeitz has written to Home Affairs Minister Karen Andrews and Immigration Minister Alex Hawke, lobbying for 449 visa holders to be given permanent protection, and swiftly.

He says the decision to leave them on temporary visas is unfair.

“There are a few problems there I don't believe the government has thought through adequately."

Mr Hawke told SBS News last week an announcement on their future is on its way.

"Those 4,100 people, many of those have great Australian family ties," he told SBS News.

"They have had visa applications in the works for some time so the government have worked through all these issues and is making an announcement in the coming days.”

Sanam Ahmadzada and the volunteers have been overwhelmed with donations. Source: Stefan Armbruster/SBS News

Labor is also calling for clarity from Prime Minister Scott Morrison on whether the evacuees will stay in Australia or if there are intentions to resettle them overseas or return them back to Afghanistan if deemed safe.

“He’s saying on one hand, 'well, we won't send you back right now to Afghanistan', but on the other hand, 'you can't stay permanently'," Labor MP Julian Hill said.

"I mean, this is nonsense, it's a ridiculous position.”

Back at the donation drive, Ms Castley says agencies working with the government are optimistic evacuees will be given a permanent place in the community.

"Each level of government and each agency has indicated a very real willingness to try to work through issues.”

Ms Ahmadzada says a warm reception will be ready to greet incoming refugees as they begin to settle into the local area.

"We'd love to be able to welcome them into the community, and I know the Afghan community as a whole, everyone's looking forward to giving them that support.”