'There is no fighting, no war': Afghan orphans start their new lives in Australia

Almost a dozen orphans who were evacuated in a perilous journey through Afghanistan are starting their new lives in Australia. 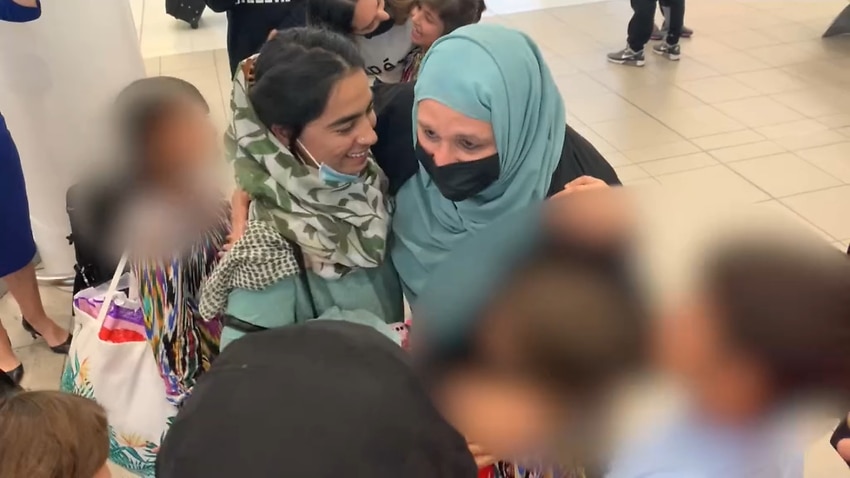 Mahboba Rawi with Latifa (right) and some of the other orphans Source: SBS News

In Australia, Mahboba Rawi is anxiously waiting at the domestic arrivals section of the airport, shuffling from foot to foot knowing her life is about to change dramatically.

“It’s the most exciting moment of my life,” she says, peering at the arrivals gate.

“All my girls are coming home, oh my God.”

After several years, the Afghan-Australian is about to be reunited with the children she’s been taking care of thousands of kilometres away in orphanages she runs across Afghanistan.

Two weeks ago, 11 of the orphans were evacuated to Australia from some of the most dangerous and remote regions, as the Taliban took hold of the war-torn country.

They were smuggled out of the country in cars and buses via land border crossings to Pakistan, after suicide bombings at Kabul airport forced the end of Australia’s military evacuation flights.

After tireless efforts by Ms Rawi’s charity Mahboba’s Promise, Australian volunteers and the federal government to get them emergency visas and on flights at Islamabad airport, the kids landed safely in Australia in September.

Mahboba Rawi with two of the orphans at the airport. Source: SBS News

Ms Rawi is about to see the orphans after their completion of hotel quarantine in another city in Australia.

When they emerge from the airport arrivals gate, one by one the orphans kiss and hug the woman they call their mother.

“Hello mum,” a seven year-old says, as Ms Rawi embraces her and the others through tears.

“It's the happiest day of my life,” Ms Rawi tells SBS News at the airport.

“It's so good, the children is (sic) with me, I cannot express my feelings.”

The kids - nine girls and one boy - are handed toy koalas and kangaroos by their carers at the airport, before they make their way to their new home.

'The house was bare'

While the kids were playing in their hotel rooms in another city, a group of volunteers had been busy preparing their rooms and their new houses.

In just two days, they managed fully furnish the two separate residences after a community call-out for donations of new clothes, toys, beds, linens and other essentials.

The day before the kids arrived, volunteer Diana Wallis and a group of others were still busy putting everything together, unloading furniture donated by the community.

Ms Wallis said it was a herculean effort to get the residences ready for the kids.

“A week ago we didn't even have the house,” she told SBS News.

“We didn't have any beds - nothing - the house was completely bare.”

Ms Rawi has applied to be the foster carer for six of them, most of them siblings. Her sister, Zarghouna, has given up her job as a pharmacist to take in the other four in a separate house nearby.

“They will be looked after by the community, not only by me, by the Australian community, and we will raise them as leaders for the world, not only for Australia,” Ms Rawi said.

“We want to raise these children that the world will be proud of.”

The children are excited for their futures too. Most of them are girls whose lives would have been much different under the Taliban, with girls over the age of 12 apparently banned from school.

“I want to study,” one of the older girls tells SBS News of her plans.

“In Afghanistan, there was just war.”

The eldest of the group, Latifa, says she wants to study and become a journalist.

The 27-year-old had spent two decades at the Mahboba’s Promise orphanage in Kabul after her paraplegic mother died when she was four.

“I have lots of plans, I really want to study.”

Latifa was smuggled out of Afghanistan through the Torkham border wearing a burqa in the back of a car with a few of the children.

She said the journey was terrifying.

“The Taliban were everywhere near the border. I was very scared of them, and so were the children,” Latifa says.

“But whenever they'd spot a Taliban member and point them out, I'd just reassure them there was nothing to worry about.”

For Ms Rawi, this is the start of not just a new beginning for the children, but a new chapter in her life too.

She is about to take up the role of a mother again, later in her life.

"I’m going to be busy," she says cheerfully.

"But the good thing is tonight (for these kids) there is no suicide bomber around, there is no fighting, no war.

"The fridge is full of food and the house is comfortable."

Watch the TV story on SBS World News at 6.30pm.