Every morning, Sara Gardner wakes up with the horrific memory of the bushfire that took her family home.

“I relive the fires every day because I’m looking at the house and the stables, and the second house and the mechanics' workshop that we had,” the 45-year-old told SBS News.

What’s left of her home in the small town of Mogo, on the south coast of New South Wales, remains a constant reminder of the 40-foot flames she witnessed on New Year’s Eve.

She is now living with her husband Glenn, their two daughters, and their nine rescue dogs and their puppies, in a donated caravan. 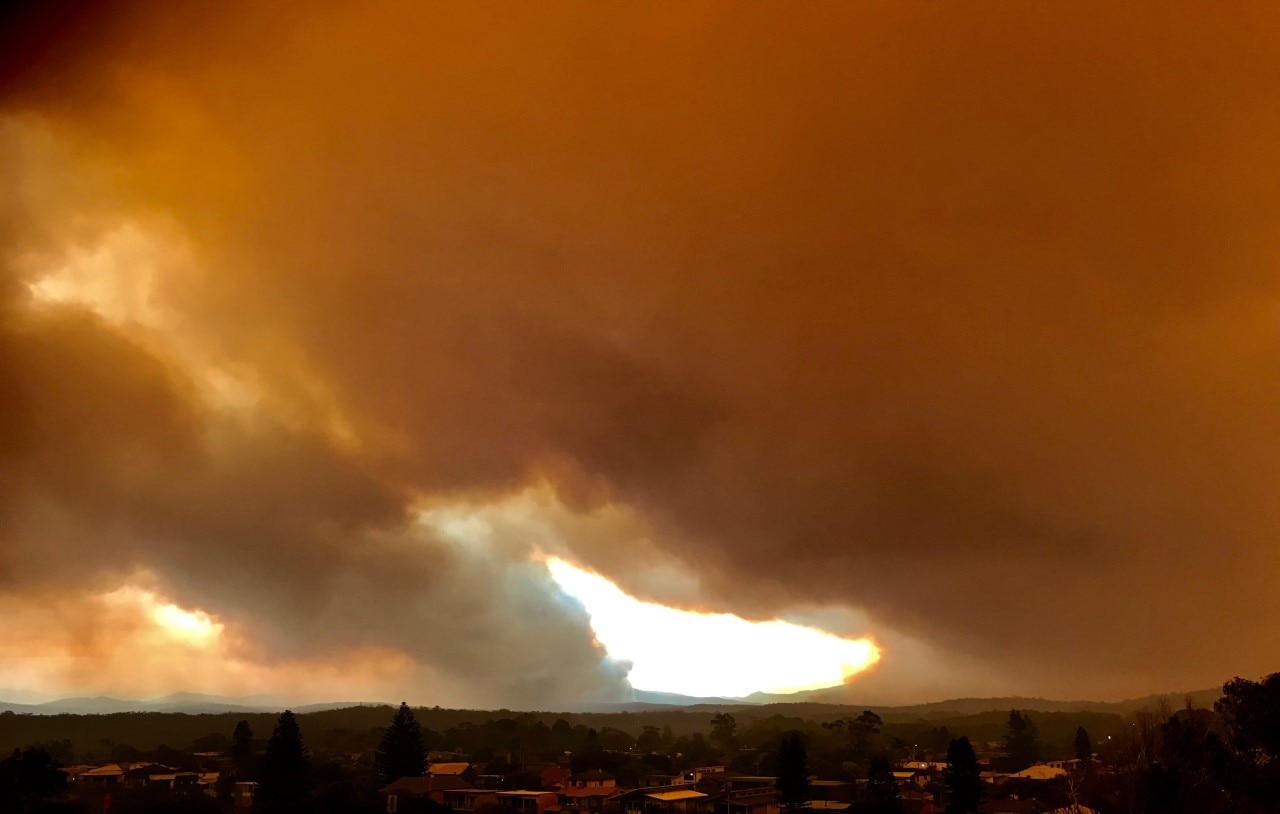 A total of 300 homes were destroyed in the Mogo town and surrounding suburbs during the bushfires. Four months on, according to the Greater Mogo Fire Recovery group’s database of almost 50 houses that were destroyed in the area, there have only been six clean-ups by the NSW Government's bushfire clean-up program.

The Gardner family is currently preparing to move into temporary accommodation on their property in what is known as a 'pod', supplied by the local government. They also have a date for demolition of their damaged home.

But Ms Gardner said the response has been slow, leaving her in a difficult place mentally. 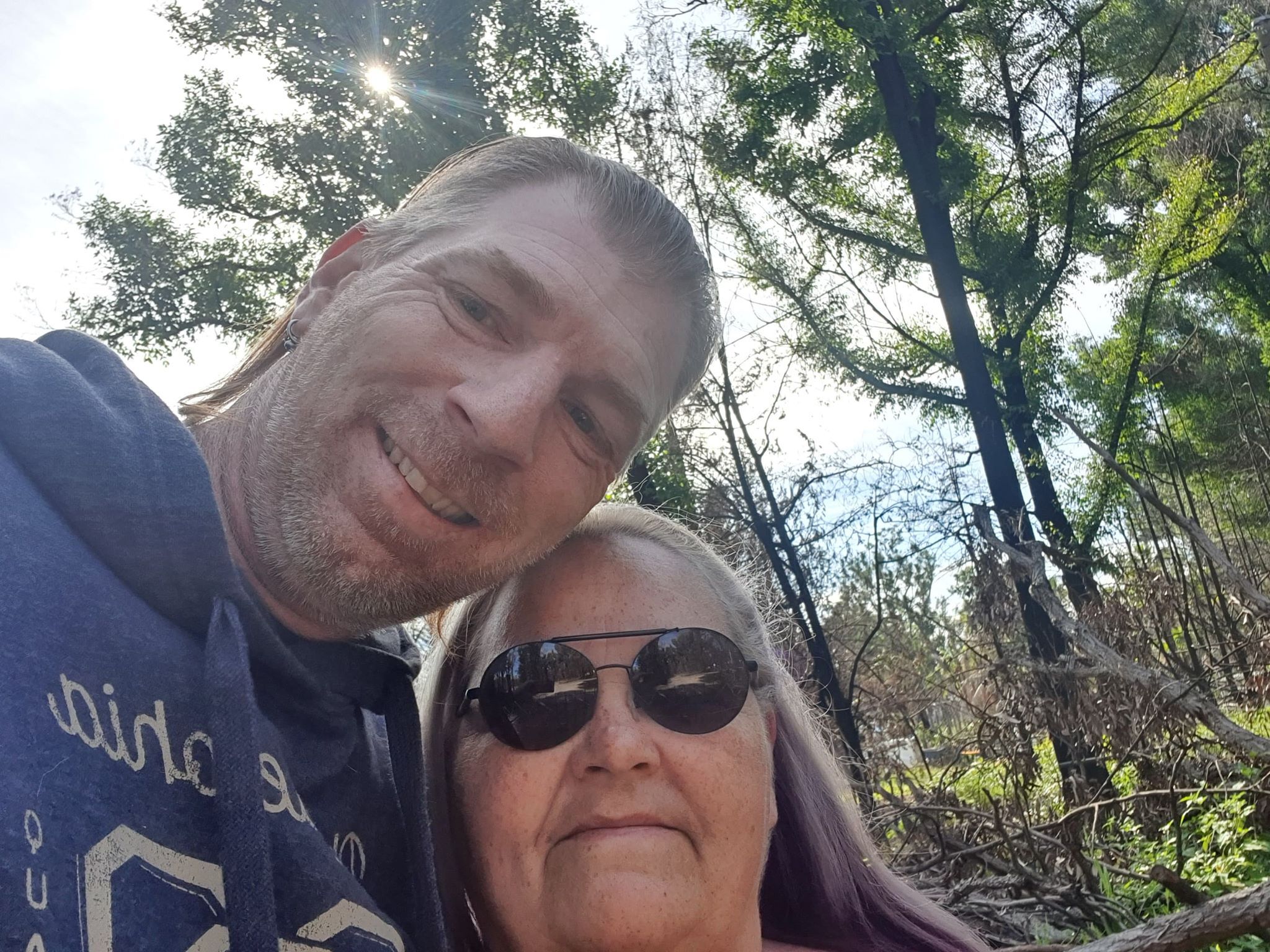 Sara Gardner is now living in a caravan with her husband Glenn.
Supplied

Ms Gardner says the assistance with re-building hasn’t been matched by on-the-ground support for those dealing with the mental health impacts of the fires.

Phone and online support has been made available by services including Lifeline - which has been calling residents and running virtual mental health workshops for those in the Eurobodalla region - but some Mogo residents do not have quality phone service and many, like Ms Gardner, have no internet access. 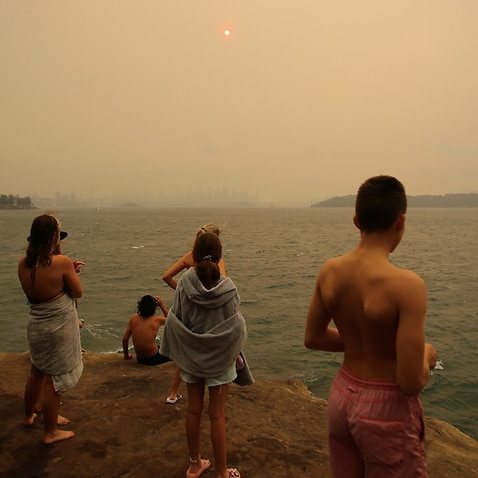 Those supporting residents have also expressed fears of an increase in suicides in the area. 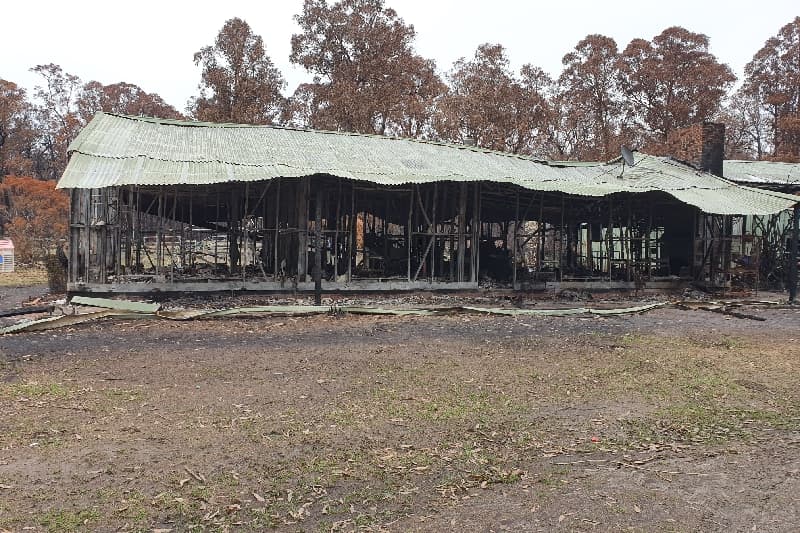 The Gardners lost their home in the January bushfires.
Supplied

It has led to locals pleading for extra help from federal and local government, and other organisations.

Ms Gardner stays in contact with Lifeline once a week over-the-phone but says seeing someone in person would make a difference.

“Face to face is a hell of a lot better, it’s just more open. They can read your body language, read your state of mind. Having that here on the ground, face to face would be a million times better,” she said. 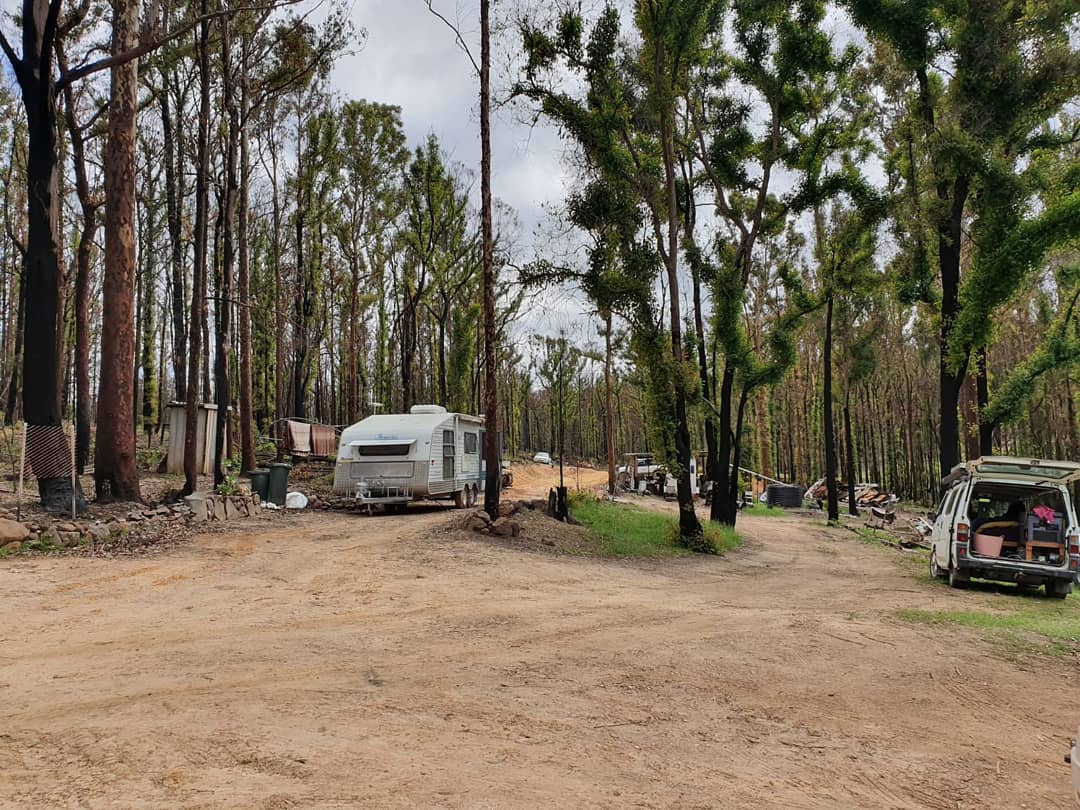 Some Mogo residents now live in caravans or tents amongst the rubble of their homes.
Supplied | Greater Mogo Fire Recovery

Locals Rebecca Thorley and her partner Diederik have been working tirelessly since launching the Greater Mogo Fire Recovery group in January. The group oversees the progress since the bushfires in Mogo and coordinates assistance from volunteers with different skills.

Ms Thorley says she has been reaching out to services in an attempt to get additional mental health assistance for local people and is especially concerned about those who don't traditionally ask for help.

“The ones that have been forgotten are the ones that don’t speak up. They’re elderly, retired couples. They don’t put their hand up and say, 'oh hang on, I’ve been living in rubble for three and a half months now and I’m not dealing with this very well',” she said. 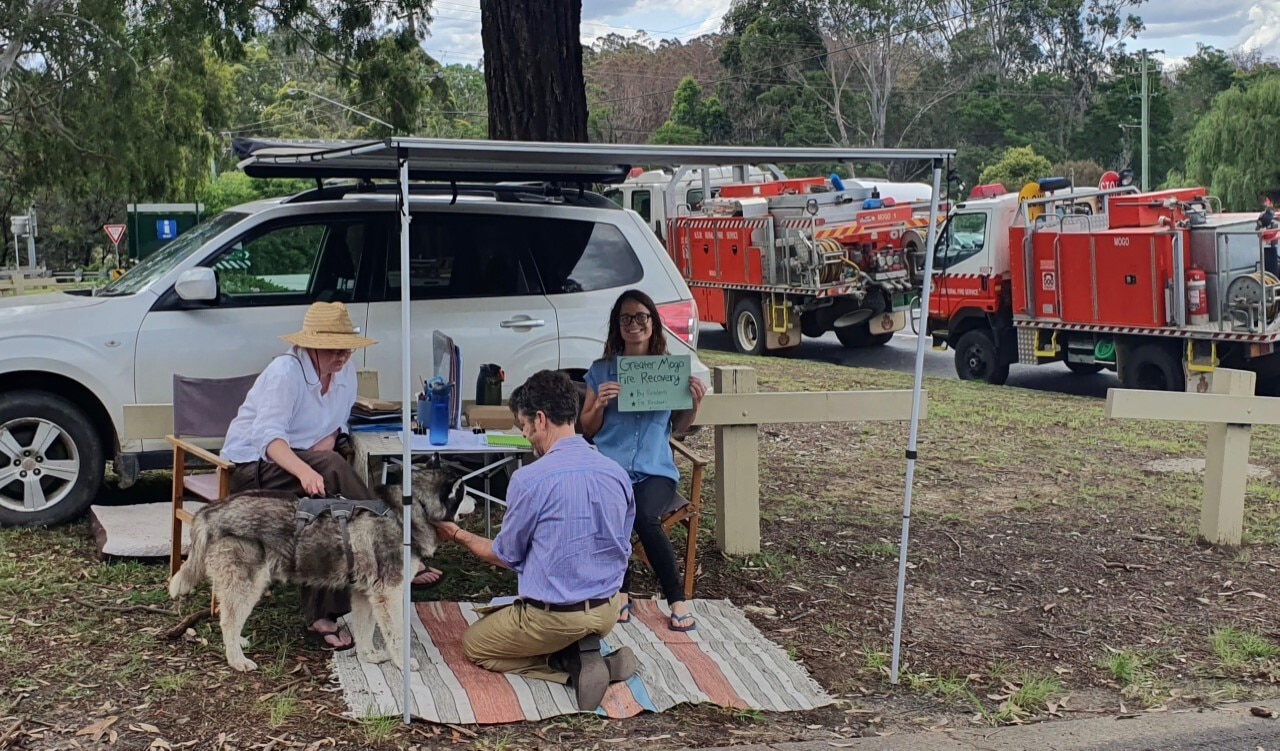 Serena Scarlett, a volunteer who was offering her counselling services to people in the area before the coronavirus restrictions came in, said she was one of the only counsellors who had been in Mogo this year.

“Bec [Thorley, from the Greater Mogo Fire Recovery group] had been saying she’d been trying to contact services, but she is one sole individual, doing her utmost to carry this whole village and surrounds on her own shoulders,” she said.

“She was so glad to find me willing to do some counselling because she was very concerned about the suicide rates and how devastated some people were with what had happened.”

Ms Scarlett remains in contact with some of the 15 people she saw during her time there and says the need for in-person mental health support is urgent.

“It's a whole different world. You need to be there on the ground, walking around and actually seeing people. You can't expect them to find you and find phone numbers, and online forms and various things. It's just not going to happen that way.”

A spokesperson for the district said "in the wake of the devastating bushfires, the NSW Government announced a significant package of ongoing health and wellbeing programs, including the recruitment of specialist mental health bushfire recovery clinicians, the Farm Gate Counsellors program and the appointment of additional school counsellors."

"Support has also been provided to the NSW Rural Fire Service in the rollout of the RFS Connect program to the 900 volunteers across the Eurobodalla.

On Monday, the federal government announced a $650 million bushfire recovery relief package, including an extra $13 million towards mental health. 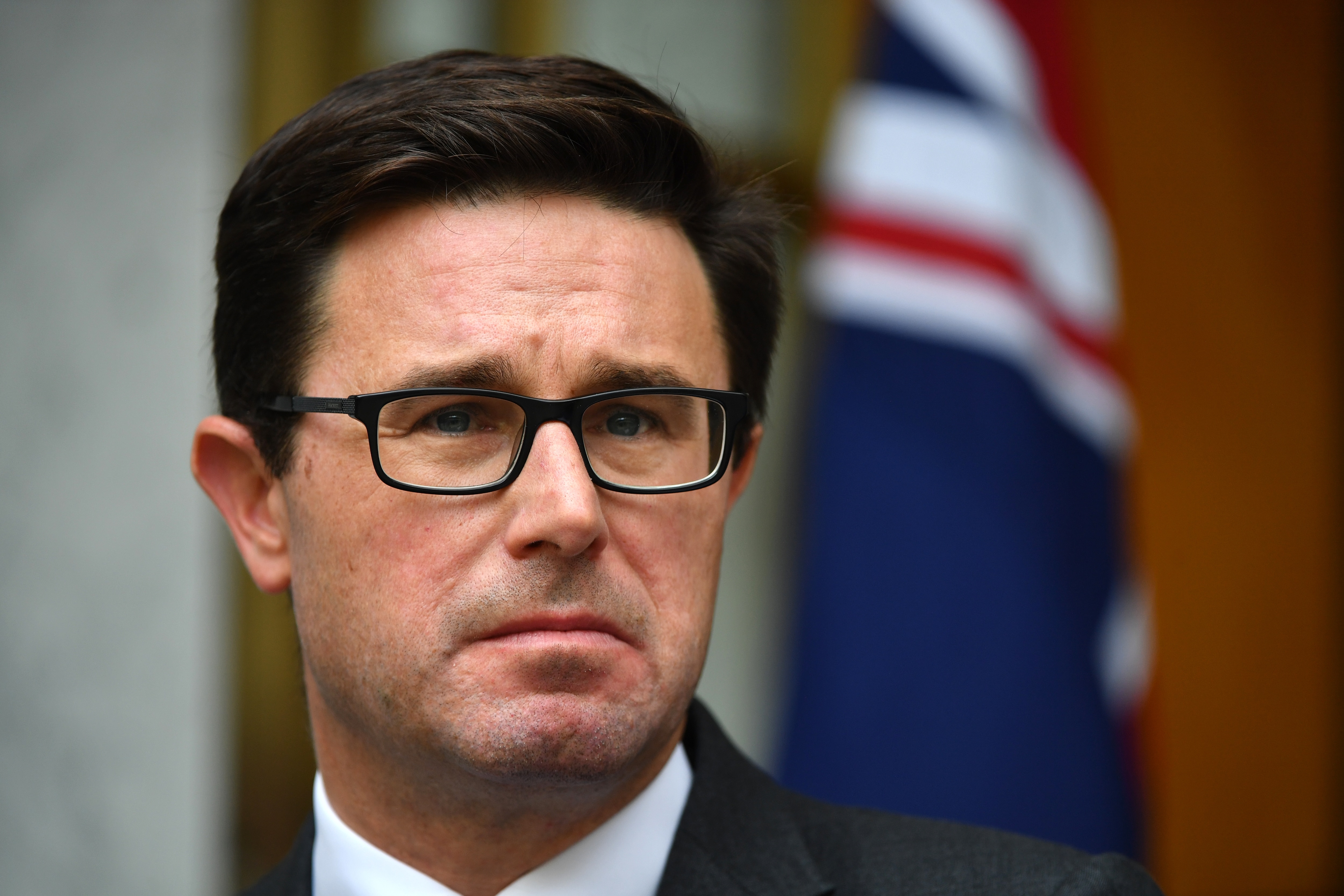 David Littleproud announced an extra $13 million towards mental health support for those impacted by bushfires.
AAP

It followed a $76 million investment to support the mental health and wellbeing of individuals, families and communities who have been affected by the bushfires, announced in January.

Agriculture Minister David Littleproud said: "We've seen the convergence of drought, fire and COVID-19 and there is a lot baring down on these people ... We are empowering the local primary health networks to tailor mental health programs for their communities."

The federal government said the mental health assistance will be community-led and the National Bushfire Recovery Agency confirmed to SBS News the rollout of funding will commence immediately. Ms Thorley said she is happy that both the state and federal governments are dedicating more money towards mental health and hopes it will get to those who need it.

"It's definitely a bit late ... [but] the more funding the better, that's awesome, but it's making sure things actually end up getting through to people," she said.

"It needs to be accessible to people and they need to know about it. I hope that it turns into outreach and gets to as many people as it can."

The Red Cross also put $18 million towards a community recovery program and “have recently employed a recovery officer who will be working with teams of volunteers to provide ongoing support for communities throughout the Eurobodalla area, linking them with appropriate services, while also facilitating important community connections during this difficult time.”

Shona Whitton, the national coordinator of recovery and psychosocial support at the Red Cross added: “As restrictions are lifted on COVID-19 physical distancing, the Red Cross will scale up our work enabling vital social connection through supporting community events and BBQs that bring people together; our volunteers will go into communities and check in face-to-face through outreach.” 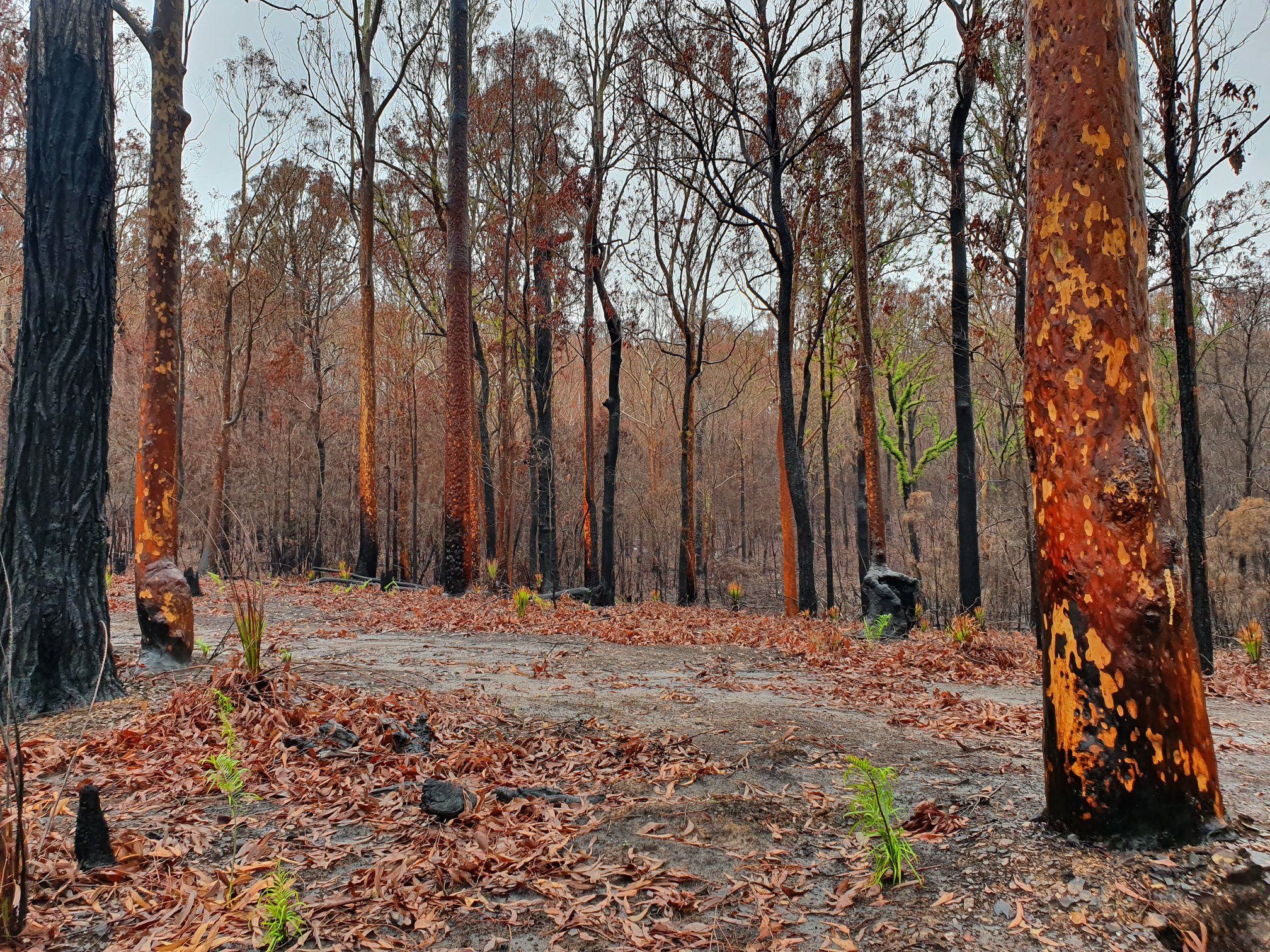 Ms Thorley says it has been a difficult few months, but she is trying to remain hopeful and support her community, particularly as Australia appears to be coming out of the other side of the COVID-19 crisis.

“I’m always trying to be overly positive and keep contacting our database to be like ‘recovery is still going’,” she said.

“It's just that constant positive thing of just trying to make them know that we still care about them, and persuade them that it's different this time [with COVID-19], the government does have a handle on things.”

Meanwhile, Ms Gardner is taking comfort in the nature regenerating amid the rubble around her.

"I'm so glad that all these trees are growing back and there's new life growing from the ground - I'm appreciative of that."