More than 500 small protests are planned as part of the national day of action protesting gas projects and calling for renewable energy investment.

Thousands of school students have taken part in climate strikes across Australia, angered by the federal government’s plans to invest in gas plants as part of Australia’s coronavirus recovery.

More than 500 small protests are planned as part of the national day of action against gas, abiding by social distancing restrictions.

Students were also be joined by representatives of the union movement to call for investment in renewable energy.

“The message we want to send by having all these actions is that we don't want this gas-led recovery,” she told SBS News.

"We are in a time bomb here, the climate crisis is not going to wait for our leaders to act."

"This is not a future I want to live in."

A resident of the Sutherland Shire, she called on her local MP Prime Minister Scott Morrison to dump his government’s energy plan.

“Overwhelmingly most students there are not impressed with the way he's handled climate change and renewables,” she said.

“We need to recover with the future in mind…with no public funding for gas or any new fossil fuels.” Students and supporters are taking part in a national day of protest to coincide with global rallies for a climate-led COVID-19 recovery.
AAP

Attendance at many of the rallies was limited to 10 or 20 people to follow COVIDSafe guidelines.

At Martin Place, around 100 placards, painted with pro-climate slogans, were displayed to represent strikers unable to attend in person.

“For a typical strike that we organise, we try and get as much turnout at an event as possible,” Ms Abhayawickrama said.

“But this time is different because of COVID, so we're trying to have as many events across the country.” A school student walks amongst signs during a student climate protest outside Parliament House in Canberra, Friday, September 25, 2020.
AAP

Around 500 small protests were scheduled to be held in towns and suburbs across Australia.

Demonstrators gathered in Alice Springs in opposition to fracking, while students left signs calling for politicians to ‘fund our future’ on the lawn in front of Parliament House in Canberra.

Amazing images from the Alice Springs protest today!!!!
WE LOVE TO SEE IT!!!! #fundourfuturenotgas pic.twitter.com/llUgn7Bry5

Small protests were held outside the offices of several government ministers, including those of Deputy Prime Minister Michael McCormack in Wagga Wagga and Energy Minister Angus Taylor in Camden.

Strikes also took place in industrial hubs like Newcastle, which has the largest coal export port in the world.

“If we don't push for change in our region now, it's just never going to happen and we're going to end up with huge unemployment."

"My generation will be the ones reaping the consequences of this.” 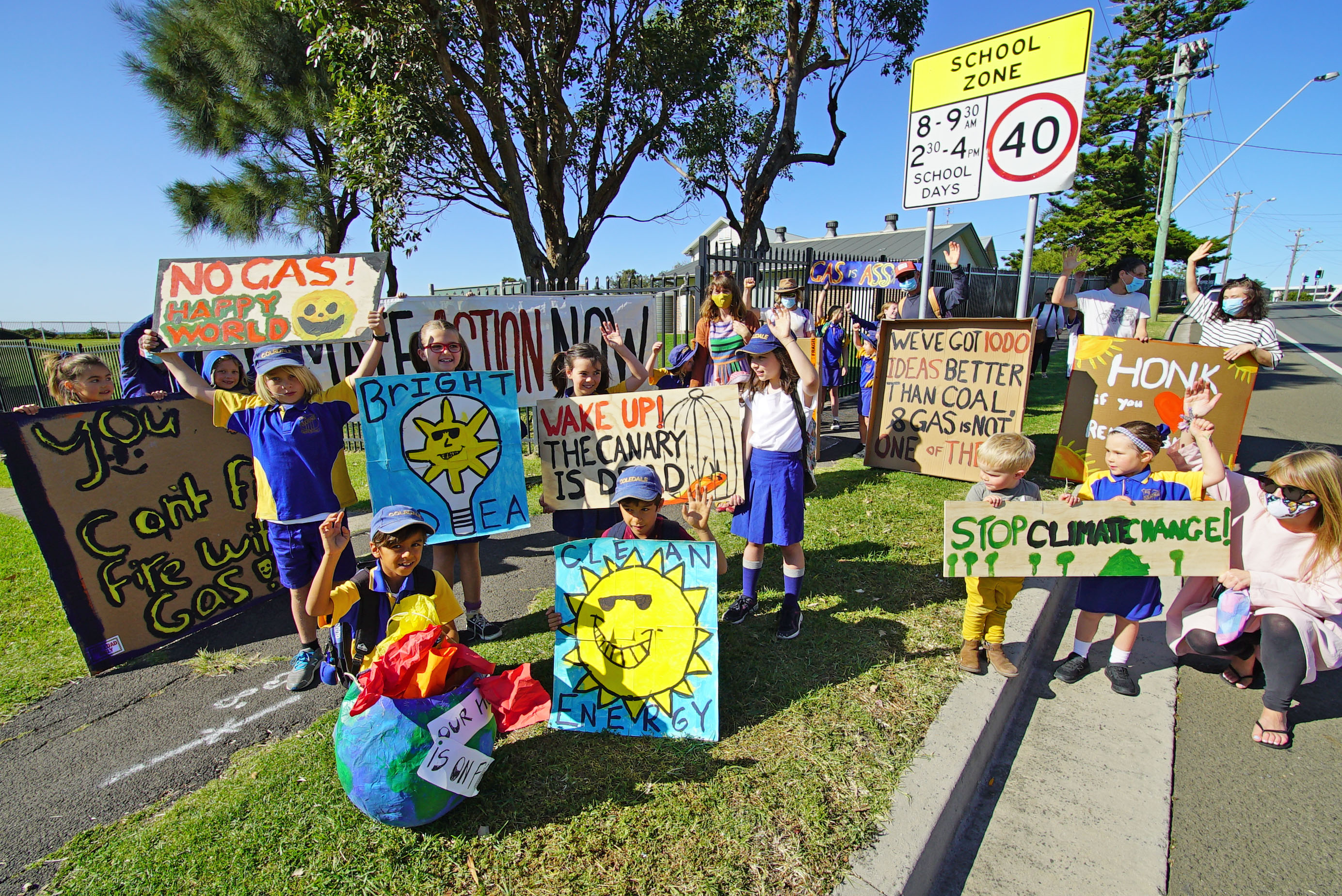 Students in Melbourne are also holding events online, unable to gather in public due to the city’s strict lockdown.

Organisers have been live streaming on Instagram throughout the day, holding discussions and music performances.

“Obviously, we feel a bit left out seeing the rest of the country on strike today,” Melbourne protester Anjali Sharma said.

“But just because coronavirus has brought our lives to a halt, it hasn’t brought the climate crisis to a halt.” Instead of gathering in public, organisers are encouraging students to inundate the offices of Mr Morrison and Treasurer Josh Frydenberg with phone calls.

“I think the politicians hearing directly from students who don't have a legal voice… I think that's really important and a really good way to put pressure on our politicians,” Ms Sharma said.

Victorian strikers will also be joining others across the country for a national Zoom rally at 6 pm AEST.

The hashtag #fundourfuturenotgas has been trending on Twitter in Australia since 9 am Friday morning.

The protests are part of a Global Day of Action, with at least 3,133 events planned across the world, according to Climate Activist Greta Thunberg.