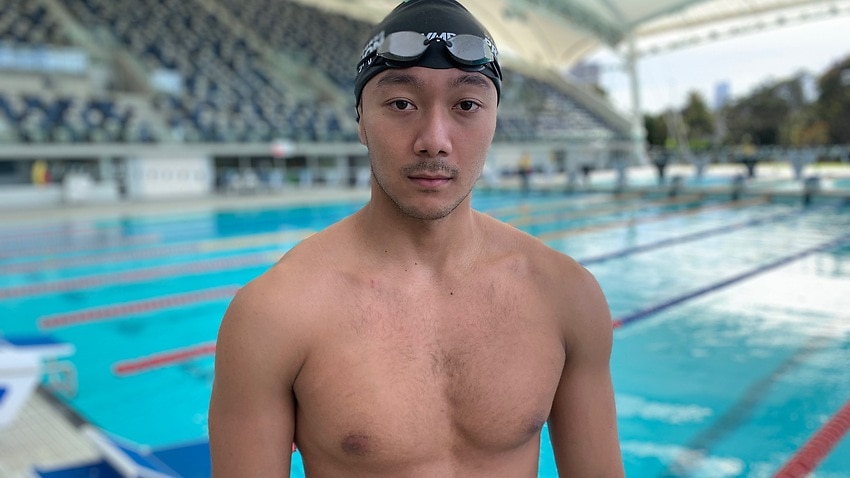 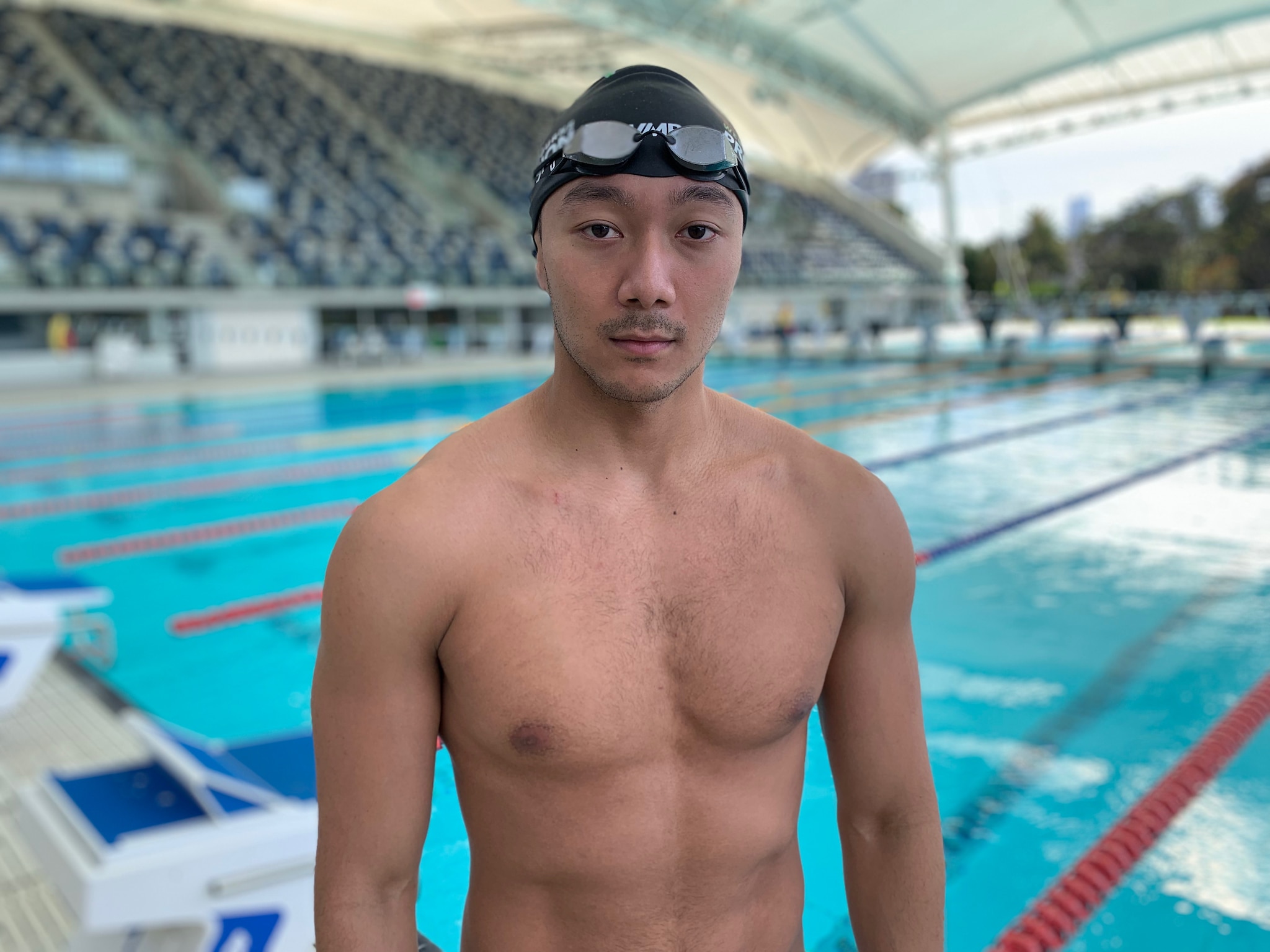 This swimmer gave up his Olympic dream to make a statement. Will others follow?

Melbourne swimmer Win Htet Oo has given up his chance to compete for his homeland, Myanmar, in Tokyo next month and says its Olympic committee should be banned. But the IOC wants to keep politics out of the Games.

Every time Win Htet Oo goes for a swim, he describes it as a “profound experience”.

He’s loved the water since he was six years old and has trained to become a professional swimmer ever since.

So when he had the chance to compete in the 2020 Olympic Games, the 27-year old leapt at the opportunity.

Like any professional athlete, he wanted to represent his homeland, Myanmar, at the highest sporting level, on the world stage.

“I decided to pursue this Olympic dream, to help to further Myanmar's sporting history,” he told SBS News.

“I had the privilege of training for so many years of my life with so many great coaches and this is my way of giving back to Myanmar.”

But his dream was over before it even began.

When Myanmar’s democratically elected government was violently ousted by the military in February, Win Htet, who lives in Melbourne, made a decision he said was both the “easiest, and most difficult” he’d ever made. He decided to abandon his Olympic journey in protest.

Myanmar security forces have killed more than 860 people since the 1 February coup, according to the Assistance Association for Political Prisoners. Hundreds of pro-democracy protesters have also been detained.

Read More
What's happening in Myanmar and how did we get here?

“I instinctively knew as soon as the military came into power, the Myanmar Olympic Committee would be controlled by the military, and as such, I won’t participate,” he said.

Win Htet was set to be Myanmar’s first-ever swimmer in the Olympics. The freestyle swimmer had previously represented Myanmar in the 2013 and 2019 Southeast Asian Games.

But when the military began its brutal rule, he made headlines when he publicly decided to boycott the Olympics and criticise the ruling junta.

"To accept the MOC [Myanmar Olympic Committee] as it is currently led is to recognise the legitimacy of a murderous regime," he wrote in a statement on Facebook earlier this year.

"I shall not march in the [opening ceremony's] Parade of Nations under a flag steeped in my people's blood."

With the Tokyo Games now just a month away, Win Htet has turned his attention to calling for the International Olympic Committee (IOC) to do more, and denounce the MOC altogether.

I shall not march under a flag steeped in my people's blood.

Myanmar is supposedly sending a team to Tokyo, but it is unknown how many athletes will compete, and in what sports.

“My call to the IOC stems from trying to protect the Olympic movement from the stain of genocide," Win Htet said.

"This Myanmar Olympic Committee is being led by an apologist to a military regime that's being accused of genocide by the United Nations and other international agencies.”

The swimmer who gave up his Olympic dream

In a public letter to the IOC, Win Htet said the Myanmar Olympic Committee has “failed abjectly in its duty to uphold the Olympic Charter and the Fundamental Principles of Olympism,” and said it should be expelled from the Olympic Movement.

But his request was denied.

A petition he set up to gain support for his request has attracted nearly 500 signatures.

SBS News contacted the IOC for comment and it referred to principle five in the Olympic Charter, which recognises that “sport occurs within the framework of society, sports organisations within the Olympic Movement shall apply political neutrality”.

On the situation in Myanmar, it said: “The IOC has received reassurances from the National Olympic Committee that there has been no impact on the preparations for the Olympic Games Tokyo 2020 and the NOC continues to operate normally”.

Western Sydney University Emeritus Professor David Rowe, who has long studied cultural and political phenomenons at Olympic events, said the chance of the IOC interfering when it comes to Myanmar’s Olympic team is “slim to nothing.”

“The IOC tries not to alienate any regime, irrespective of their human rights record, because it has this idea of being a family of Olympics, which is also a commercial family, of course.”

While the IOC Charter strictly forbids direct political interference in national Olympic committees, Professor Rowe said when it comes to being completely politically neutral, the IOC has a chequered past.

He referred to the infamous 1936 Summer Olympics in Berlin, when the IOC chose to go ahead with the event with the full awareness that Adolf Hitler and the Nazis were gaining power in the country.

It also allowed an all-white apartheid South African team to compete until global pressure forced it to ban the country in the 1960s.

Adolf Hitler at the 1936 Olympic Games in Berlin. Source: AP

More recently, Professor Rowe said the IOC’s choice to hold the 2008 Olympics in Beijing, despite criticism it was committing human rights abuses, was controversial.

He said the IOC tries to “negotiate its position in relation to all the places in the world, their various political regimes”.

“And of course, it's particularly interested in not ruling out authoritarian countries as potential hosts for the games, for example, China and Russia.”

Read More
Monica fled Myanmar for Australia as a child. The crisis there has brought it all back

Despite the IOC’s goals for international peace during the Games, politics have disrupted them throughout their history, whether through boycotts, propaganda, or protests. And this year, Professor Rowe expects it will be no different.

What is different this year though, are the rules surrounding political protest.

The IOC has introduced specific guidelines to forbid activism by athletes in Tokyo, prohibiting “gestures of a political nature, like a hand gesture or kneeling,” during “play, opening and closing ceremonies, medal ceremonies, and at the Olympic village”.

Tommie Smith and John Carlos protest with a black power salute at the 1968 Olympics in Mexico City. Source: AP

Professor Rowe said if athletes break the rules, it could see them having their medals stripped or being sent home from the Games. But, he said, he still suspects political protests will take place.

“I would be very surprised if there weren't multiple demonstrations or expressions of protest somewhere at the Games or across different sites. Perhaps not on the field of play or at the podium necessarily, but that is quite possible.”

I would be very surprised if there weren't multiple demonstrations or expressions of protest.

In the case of Myanmar, it may be the three-fingered salute - the symbol associated with the pro-democracy movement.

Burmese footballer Pyae Lyan Aung already caused a stir in Japan earlier this month after he used the symbol during a qualifying match for the 2022 FIFA World Cup.

During a post-game press conference, the 27-year-old said he was seeking asylum in Japan.

"After I flashed the three fingers in Japan, I was planning to go back to Myanmar. If I go back, I will be detained, or I will have to flee somewhere,” he told reporters.

“My gesture got so much attention in the media and became big news. This is an unforgivable action to the military in Myanmar as they behave as they wish. I would be in danger if I go back home.”

The Japanese government said it was aware of the player's asylum claim and would let him stay while it was being assessed.

Japan's chief cabinet secretary Katsunobu Kato, said he expects there will be more asylum claims from Burmese athletes once the Olympics commence.

"The current situation in Myanmar is still unclear. It is my understanding that some Myanmar people living in Japan have expressed their concerns about going back to their country,” he said.

Murdoch University Professor of Law Mary Anne Kenny said every country that hosts an Olympic Games will “prepare for this eventuality”.

“We've seen people claiming asylum virtually at every Olympic Games and most countries, when they prepare to host the Olympics, will have in place contingencies to deal with that.”

Professor Kenny said while Japan does have very strict immigration laws, it has signed the international refugee convention, so should process every claim appropriately.

“If a person comes to your country and they seek asylum, you have to allow them to go through a process to be assessed as to whether or not they have a genuine fear of persecution of returning to their country,” she said.

“And if they do, you cannot return them there. These are obligations which are set out in international law.”

Win Htet hopes to compete for a "free Myanmar" in the future. Source: SBS News

For Win Htet, he said he hopes any Burmese athletes attending the Games will be given protections, should they need it.

He said he will be watching the Olympics closely from Melbourne and hopes one day he will be able to compete for Myanmar.