Thousands of women have rallied for abortion rights in Latin America

Women have marched across Latin America to mark the global day of action for access to safe and legal abortion. 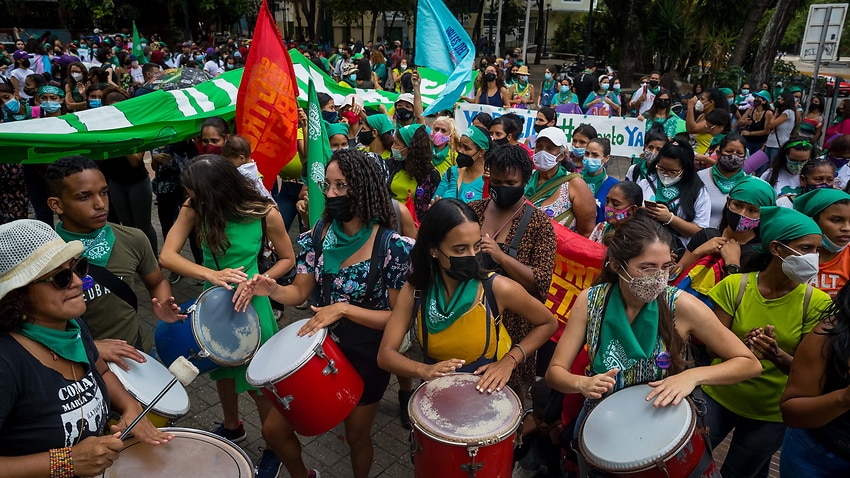 Thousands of women spilled on the streets of Caracas, Venezuela to demand legal abortion. Source: EFE

Thousands of women have taken to the streets across Latin America to demand the right to safe and legal abortions.

Abortion is largely prohibited in the region, where hundreds of women are serving prison time under draconian laws.

Protesters at rallies across El Salvador, Chile, Peru, Mexico and Colombia held aloft banners that read "Legal Abortion Now", "Right to Decide", and wore green scarves that are characteristic of the global movement for decriminalising abortion.

In El Salvador, where abortion is banned in all cases, women seeking the procedure can face up to eight years in prison for "aggravated homicide." Seventeen women currently remain in detention after having experienced obstetric emergencies, women's rights advocates say.

On Tuesday, International Safe Abortion Day, hundreds of Salvadoran women demonstrated outside the national legislature, carrying a large banner that read: "To decide is my right, legal abortion now."

A committee of the protesters presented a proposal to Congress for legalising abortion in certain cases, such as when the pregnancy puts the woman's life at risk, if the fetus is unlikely to survive after birth, or if the pregnancy "is the result of sexual violence".

The proposal comes after El Salvador's President Nayib Bukele withdrew a constitutional reform in mid-September, drafted by his own government, that would have opened the door to legalise therapeutic, or medically necessary abortions.

Abortion is also banned in Honduras, Nicaragua, the Dominican Republic and Haiti, and most other countries in the region allow it only for medical reasons or in case of rape.

'Down with the patriarchy'

In Chile, the lower house of Congress on Tuesday approved a bill to decriminalise abortion within 14 weeks of pregnancy, a major step in a country where the Catholic Church has fiercely opposed the practice.

Politicians gave the green light with 75 votes in favour, 68 against, and two abstentions, according to the congressional Twitter account.

The proposal has yet to be approved by Chile's ultra-conservative senate.

Women across Latin America march in favour of abortion rights

The bill, submitted in 2018 by the opposition party, seeks to change the existing law, which allows elective abortion only in three scenarios: when there is a threat to the life of the pregnant woman, if the foetus is unviable, or if the pregnancy was the result of rape.

These legal abortions represent only about three per cent of the thousands of clandestine terminations taking place in the country, according to activists.

Until 2017, Chile maintained an outright ban on the procedure that is still denied to most women in Latin America.

"This is for all the women ... who have been persecuted and criminalised," wrote Camila Vallejo, one of the authors of the bill, on Twitter.

"Down with the patriarchy which will fall, will fall!" Ms Vallejo added. "Up with feminism, which will win, will win!"

In Latin America, abortion is currently legal only in Uruguay, Cuba, Argentina and Guyana, as well as in Mexico City and four of Mexico's 32 states.

In Mexico City on Tuesday, dozens of women marched downtown calling for the procedure to be decriminalised across the country.

One of the banners carried by the protesters read "Abortion is not legal, rape is."

Some activists shouted: "Let the sexists tremble, Latin America will be feminist!"

Hundreds of police were deployed at the protest and there were altercations between them and the women.

The demonstration took place after a landmark ruling by Mexico's Supreme Court earlier this month, which declared that abortion cannot be considered a crime.

The decision opened the door for all Mexican women to access this procedure without fear of being prosecuted and potentially imprisoned, but legal hurdles still remain.

Another pro-choice protest was held in Lima, where dozens marched to demand that the Peruvian government legalise abortion, which is currently allowed only when the woman's life is in danger.

But the protesters face an uphill battle with the recently elected leftist leader Pedro Castillo, a social conservative, rejecting the idea during the presidential campaign.

In Peru, around 370,000 clandestine abortions are performed each year, according to estimates by civil society groups.