Critics argue the government's guidelines for music festival organisers, published late last year, suggest any outdoor event will almost certainly be considered high-risk or even extreme and be subject to a licence fee.

The guidelines have since been removed from NSW Health's website. 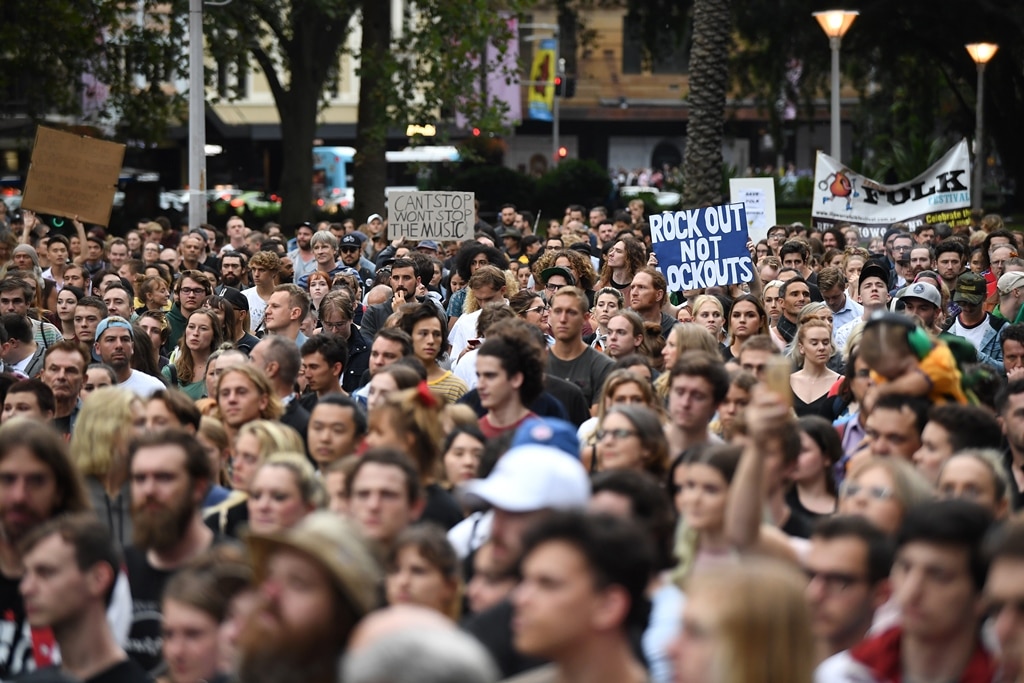 Sydneysiders gathered in the rain for the Don't Kill Live Music rally on Thursday night, holding signs with slogans including "rock out not lockouts" and "murder of the dance floor."

Events found to be high-risk will pay $650 for a licence - which is equivalent to the fee they currently pay to operate.

This followed five deaths from suspected drug overdoses at NSW music festivals from September to January this year. The five revellers died at the FOMO festival in Parramatta, Defqon.1 in Penrith, the Knockout Games of Destiny at Sydney Olympic Park and the Lost Paradise festival on the central coast.'

"For festivals that have a good track record and good practices in place it will be largely business as usual," Mr Toole said in a statement.

The Australian Festival Association has criticised the proposal claiming well-run festivals with excellent safety records are already being negatively impacted.

Despite assertions the scheme would not impact low-risk festivals "the government has failed to provide clarity and certainty around its risk categories," the association said in a statement. Among other issues, the rally called for the government to form a music regulation roundtable to review all regulation impacting live music, develop a transparent industry standard for user-pay policing and medical services, and work with the industry to develop achievable, effective and robust safety protocols for festivals.

MC Rhys Muldoon said Sydney was in danger of becoming like the fictional town in the film in Footloose, which outlawed dancing and rock music.

Musicians Dan Sultan and Bertie Blackman, and music duo Polish Club all performed for the crowd.

Nathaniel Holmes from Architects of Entertainment, whose clients include Laneway Festival, Splendour in the Grass, Mountain Sounds and FOMO, said the fee-free licences were a zero-sum game.

"It would be exactly the same because at the moment these festivals aren't being faced with these high costs," Holmes told AAP on Thursday.