Large numbers of people gathered in Sydney, Melbourne and Brisbane armed with signs and placards, many baring the #sackScomo hashtag.

Thousands have rallied in Australia’s capital cities to demand action on climate change and condemning the government’s handling of the ongoing bushfire crisis.

Large numbers of people turned out Sydney, Melbourne and Brisbane armed with signs and placards, many baring the #sackScomo hashtag, in a dig at Prime Minister Scott Morrison.

In Sydney, alone, NSW Police estimated 30,000 people had gathered at Town Hall in the CBD.

Many held banners which read "Time is Running Out," "Declare a Climate Emergency," "You have blood on your hands, Morrison," "Make Fossil Fuels History," and "Sack ScoMo."

Organisers, Uni Students for Climate Justice and Extinction Rebellion, believe they exceeded the November climate rally protests  – which saw about 20,000 descend on the Sydney CBD, and other rallies. Protesters hold up their signs ahead of the rally in Sydney.
AAP “Out of control bushfires are sweeping across the state - destroying thousands of hectares, houses, and lives,” organisers said on Facebook.

Here at the #AustraliaBushfires protest in Sydney. Lots of people. “We are dealing with a coordinated campaign of disinformation and misinformation ... we have no choice but to challenge this with all our might,” says @MehreenFaruqi. @SBSNews pic.twitter.com/p7FqI37hnc

“These fires, heatwaves, and droughts are not just unprecedented - they're the direct result of decades of climate destruction at the hands of fossil fuel loving politicians. The climate crisis has compounded hundreds of years of land mismanagement since invasion and decades of profiteering on water which has left much of the country in drought." Protesters on the march in Melbourne's CBD.
Evan Young

Firefighter Jim Casey, who is also a member of the Firefighters for Climate Justice group said: “we need to talk about the elephant in the room”.

“The volunteer firefighters – we need to pay them,” he told SBS News at the Sydney rally.

“I’ve been a professional firefighter for more than 20 years in Sydney and Canberra. I’ve never seen anything like it.” Protesters chanted, "Hey hey, ho ho ScoMo has got to go" as they gathered at Town Hall.
Maani Truu

The protesters are calling for pay for all firefighters and “genuine relief and aid for affected communities”. They’re also seeking an “immediate rapid transition away from fossil fuels”.

Huge boos and calls of shame when @ScottMorrisonMP’s visit to Cobargo is mentioned. “We are in mourning. Twenty eight dead,” Ambrose, a school striker says. “This is a native animal annihilation.” @SBSNews

Sydney protester Ambrose Hayes, 14, told AAP people were "fed up" with Mr Morrison because he's not acting enough on the "climate crisis".

"This (the bushfire crisis) is caused by climate change, there is no denying it and they're (the government) just letting it happen," he said.

"They're not listening to us."

Izzy Raj-Seppings, the 13-year-old who made headlines when she was moved on by police during a climate protest outside Kirribilli House in December, called on Mr Morrison to step up.

Hundreds of protesters also rallied in Adelaide and Brisbane.

In Brisbane, Dylan Peters told SBS News he had gathered to stand in solidarity with fire victims.

"We are a state that is mining the most," he said, referring to Brisbane. 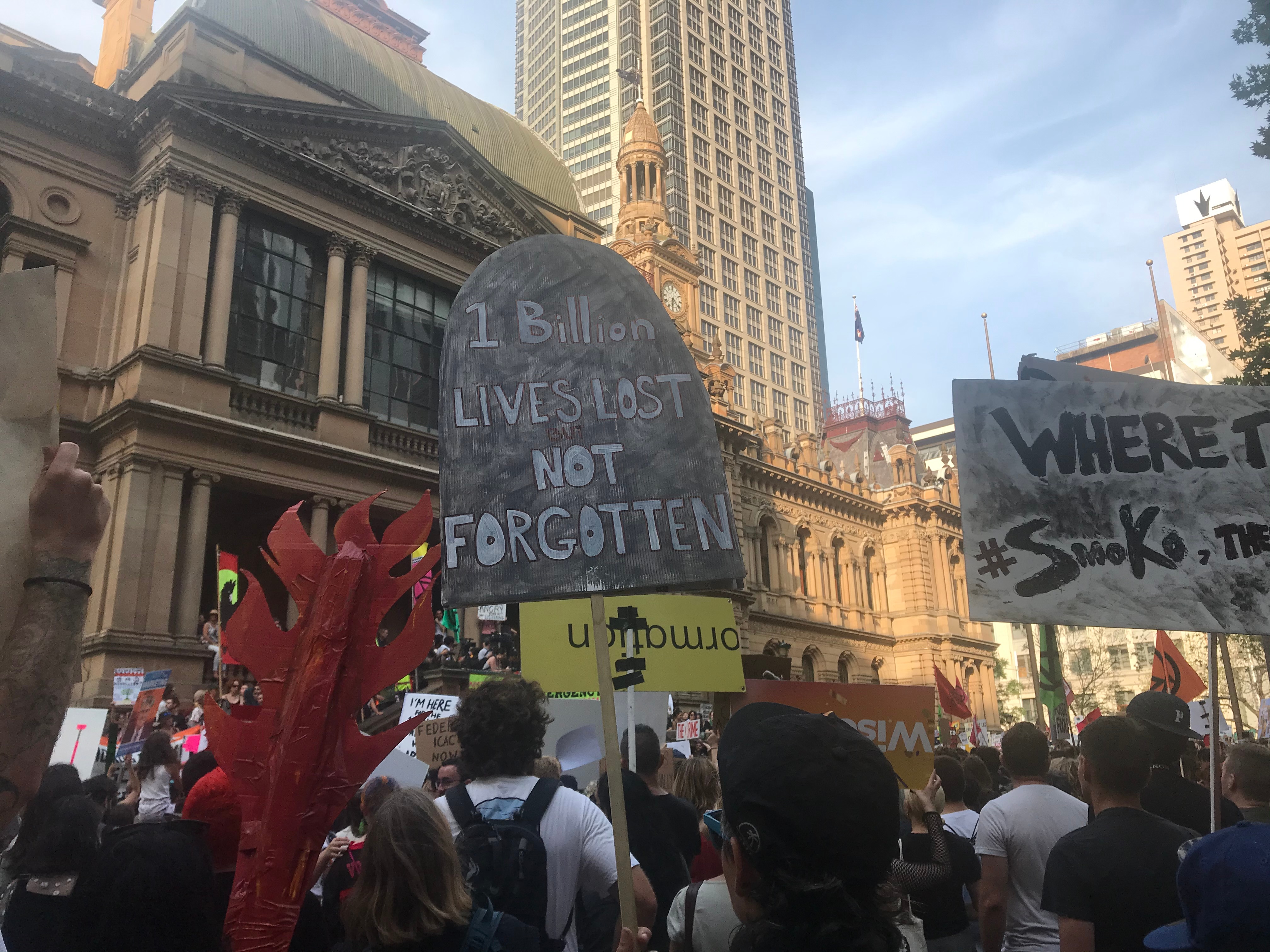 Meanwhile, in Melbourne, rain and wet conditions did not deter protesters, with large numbers turning up in the CBD.

Mr Morrison this week announced an initial $2 billion bushfires recovery fund and handed over an immediate payment of $60 million to council areas affected by the fires.

He has flagged a royal commission and says any national inquiry into the bushfires crisis would need to examine the impact of climate change.

But while acknowledging there was an appetite to examine the impacts of climate change, he said he would not consider a stronger commitment to carbon emission reductions.

Earlier, Victorian police said authorities were not being pulled back from bushfires to police the protest.

"We have deployed hundreds of resources to support officers in bushfire-affected areas and this commitment remains unchanged," she said.

More people continue to shuffle toward the State Library for the #SackScoMo protest, spilling out onto the street, surrounding footpaths and into Melbourne Central pic.twitter.com/yL5wpuLbhP

"However, we are frustrated by the timing of this protest and it will impact on other proactive initiatives and operations we have in place. 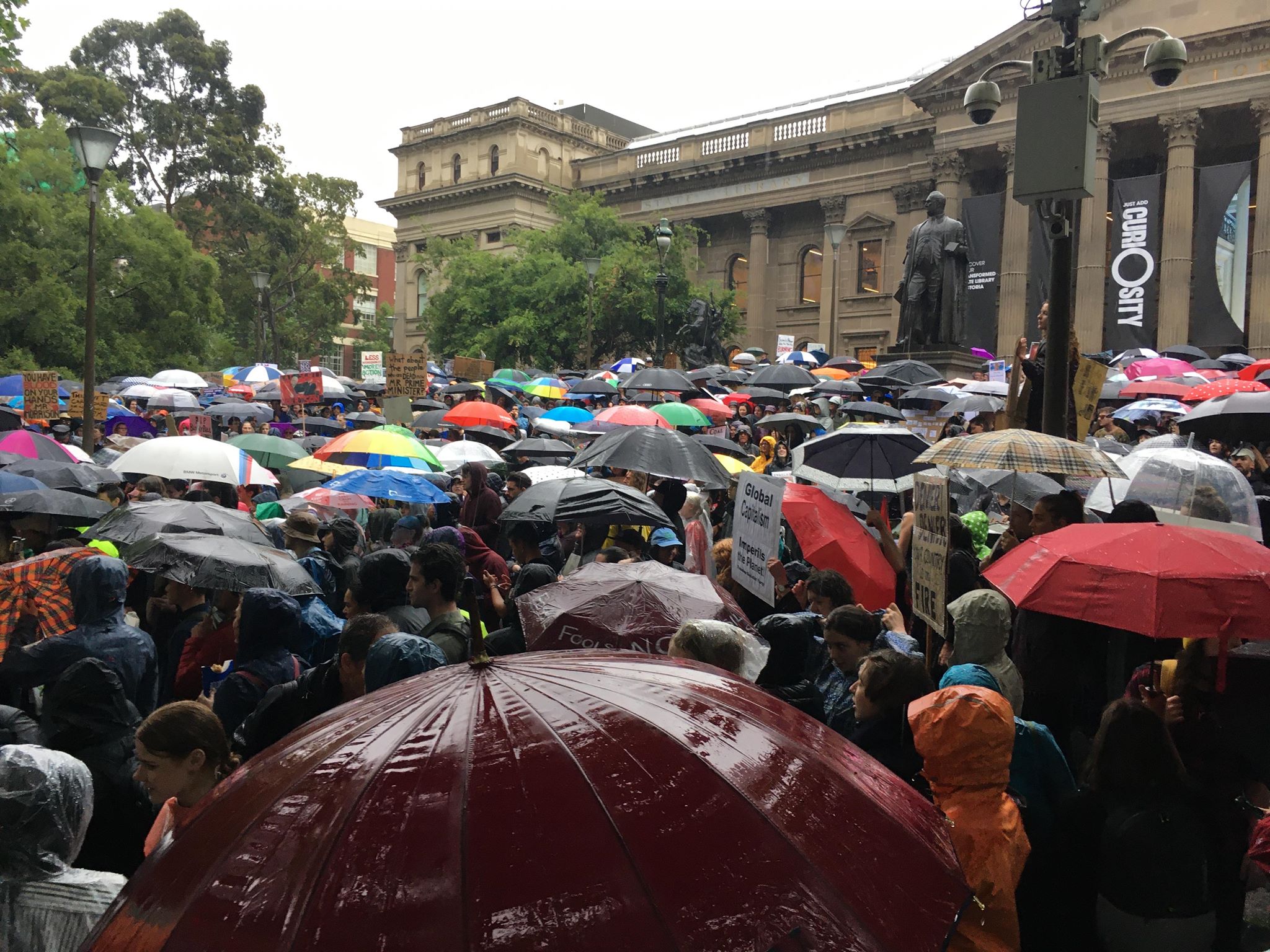 Wet conditions did not deter protesters in Melbourne.
Evan Young

"It also means we now have to redeploy some of our officers who have only just returned from the firegrounds to the protests."

Victorian Premier Daniel Andrews, who urged protesters to postpone the event, sent protest organisers a stern warning on Thursday, telling ABC Radio "they risk losing support from those like him that believe in climate change".

These warnings had been previously voiced by Emergency Services Minister Lisa Neville, who on Wednesday said she was stunned to hear the protests were going ahead.

"This is a really reckless and selfish thing people are doing. "There is a time for protests. It's not this Friday," she said. "I don't want to see police having to pull people out of (fire-affected) communities to come in and manage a protest.

But the students have renewed their determination to stage their event.

Earlier on Thursday, the protesters released a statement saying they are holding fast under government and police pressure. 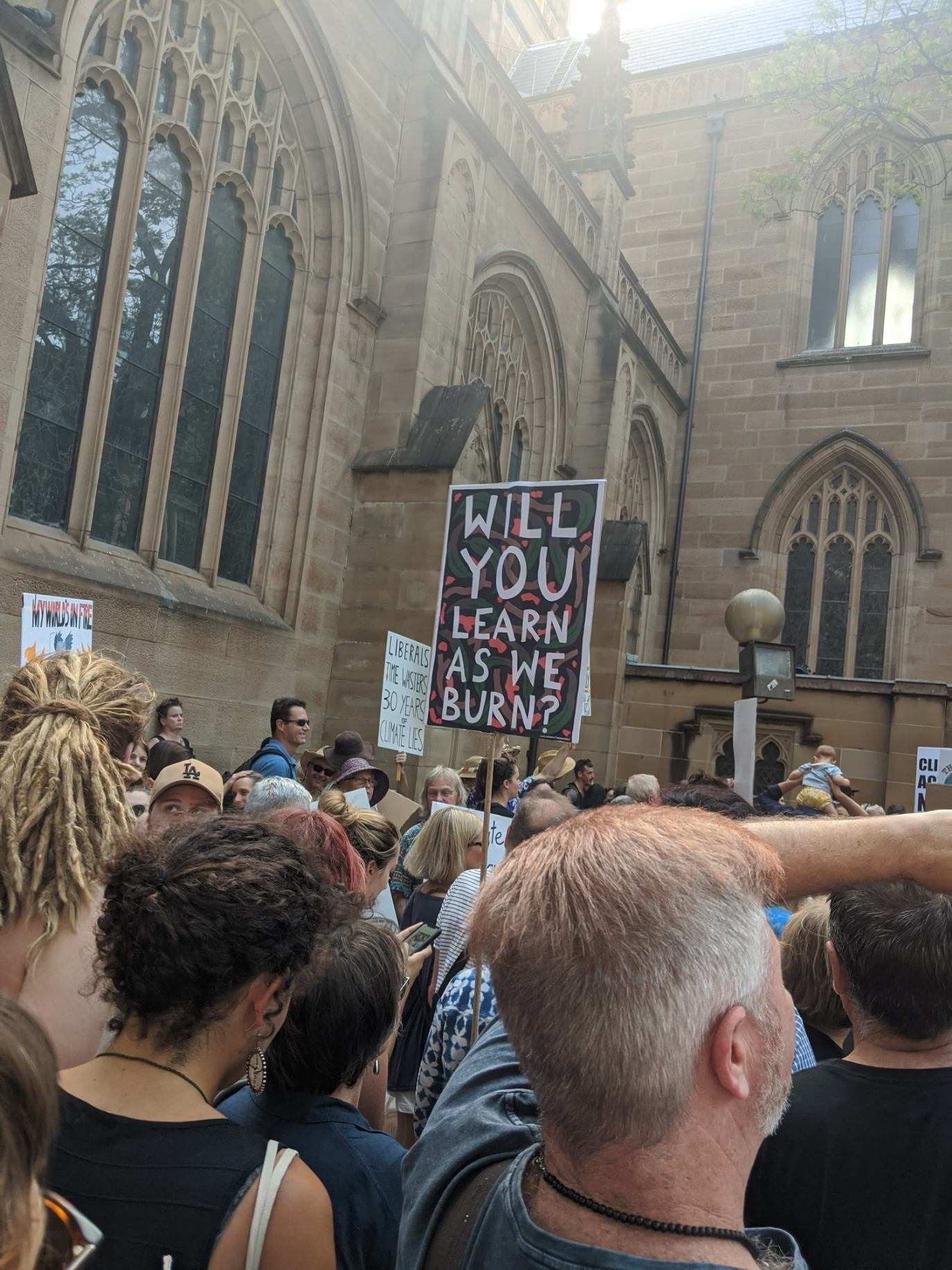 Protesters have also called for pa for volunteer firefighters.

"Protesters are not to blame for the lack of emergency services - state and federal governments are the ones who have cut millions in funding to fire departments, while they give billions in tax subsidies to the fossil fuel industries," said spokesperson Anneke Demanuele.

"We'll stop the protest if the Liberal and Labor governments stop supporting the fossil fuel industry." 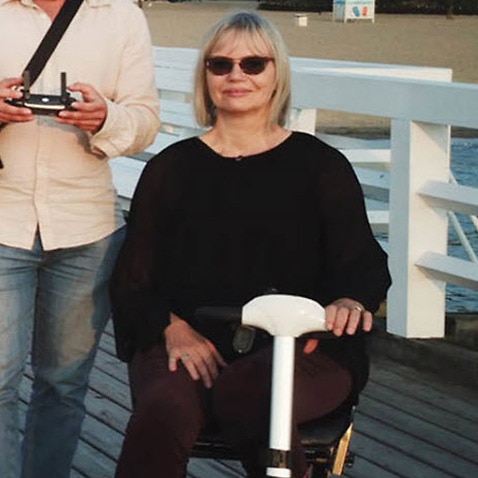 More than 14,000 had Thursday evening indicated they will attend the rally on the Facebook page for the event.

The Melbourne protest is one of a number of planned rallies around the country on Friday and Saturday.