Police said forensic teams had launched an investigation and were still on the scene but that the cause of the deaths was unclear. 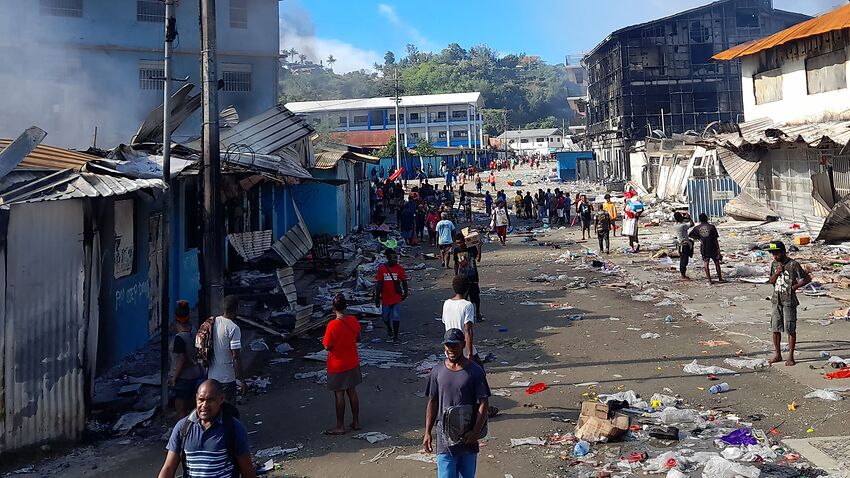 People gather as smoke rises from a burnt out building in Honiara's Chinatown on 26 November, 2021. Source: Getty

The bodies of three people have been discovered in a burnt-out building in the Solomon Islands capital Honiara, police said Saturday, the first reported deaths after days of rioting.

The charred bodies were discovered in a store in the Chinatown district of Honiara, with a security guard telling AFP he found the bodies in two rooms late Friday.

Police said forensic teams had launched an investigation and were still on the scene but that the cause of the deaths was unclear.

The streets of the capital remained relatively quiet on Saturday morning as locals begin to assess the damage left by days of rioting.

A curfew had been imposed on the restive capital overnight after a third day of violence that saw the prime minister's home come under attack and swathes of the city reduced to smouldering ruins.

Australian peacekeepers, who arrived in the country late Thursday, also joined police on the streets to restore order and protect critical infrastructure.

The explosion of violence is partly a result of frustrations with Prime Minister Manasseh Sogavare's government and chronic unemployment - made worse by the pandemic.

Experts say the crisis has also been fuelled by long-standing animosity between residents of the most populous island Malaita and the central government based on the island of Guadalcanal.

The archipelago nation of around 700,000 people has for decades endured ethnic and political tensions.

Malaita residents have long complained that their island is neglected by the central government, and divisions intensified when Sogavare recognised Beijing in 2019.

Mr Sogavare on Friday blamed unnamed foreign powers as being behind the violence, telling the ABC that external pressures are a "very big ... influence".

"I don't want to name names. We'll leave it there," he said.

Australia to send troops to Solomon Islands amid protests

Honiara's Chinatown and its downtown precinct were focuses of rioters, looters and protesters who demanded the resignation of Sogavare, who has been prime minister intermittently since 2000.

He has been widely criticised by leaders of the country's most populous island of Malaita for a 2019 decision to drop diplomatic ties with Taiwan in favour of mainland China.

His government, meanwhile, has been upset over millions in US aid promised directly to Malaita, rather than through the central government.

But those issues are just the latest in decades of rivalry between Malaita and Guadalcanal, where the capital, Honiara, is located, said Jonathan Pryke, director of the Sydney-based Lowy Institute think tank's Pacific Islands program.

"Most of the drivers of the tension have been in the country for many decades and generations, and a lot of it is borne out of the abject poverty of the country, the limited economic development opportunities and the inter-ethnic and inter-island rivalry between the two most populous islands," he said.

"So everyone's pointing fingers, but some fingers also need to be pointed at the political leaders of the Solomon Islands."

Since the 2019 shift in allegiance from Taiwan to China there has been an expectation of massive infrastructure investment from Beijing - locally rumoured to be in the range of $US500 million - but with the outbreak of the COVID-19 pandemic shortly after the shift, none of that has yet materialised.

Mr Sogavare on Friday said he stood by the decision to embrace Beijing, which he described as the "only issue" in the violence, which was "unfortunately influenced and encouraged by other powers".

More than broad geopolitical concerns, however, Pryke said the demonstrations really boiled down to frustration over the lack of opportunities for a largely young population, and the concentration of much of the country's wealth in the capital.

"I guarantee you the vast majority of the people involved in the rioting and looting couldn't point China or Taiwan out on a map," he said.

"They were there as opportunists because they have had very limited economic opportunity.

"It's a very poor country with high youth unemployment, and this just shows how quickly these things can spiral out of control in a country that's volatile."