On the NSW Northern Tablelands, cattle farmer Andrew Williamson has suffered for months without rain or reprieve on his Yarrowyck property.

He said his farm is in free-fall, after only two years of operation.

"We'd hoped for an income of around about $600,000 for this financial year, and we'll be lucky to make a third of that," Mr Williamson told SBS News.

“It certainly hasn’t gone to plan. We were planning a year of selling steers for about $1000 a head, heifer for 800-850 a head. And we've had nothing like that happen. There has been little to no rain on Andrew Williamson's 1600 hectares since the start of the year. (SBS News)
SBS News

A year ago, Mr Williamson’s farm - an hour’s drive from Armidale - was green, prosperous and promised a profitable return.

Now his 1600 hectares are dry, dusty, and if it doesn't rain in spring, the next two years will also be a write-off.

His 850 cattle are severely underweight, many have eye infections because of the dust, and calves desperate for a drink are becoming bogged in near empty dams.

"I think watching your animals compromised by the drought is the hardest part, without any doubt,” Mr Williamson said. Australia's drought crisis: Sikh farmers fight to save their crops

A loss of time

One of the lesser talked about side-effects is the impact the drought is having on a farmer's time. In good conditions, at this time of year, many farmers would be working on general maintenance around the paddocks, improving roads, and putting up fences.

But that important work has instead been pushed back, with farmers being forced to hand-feed their stock, and treat the ones struggling.

Every day it's the same, the same thing, it's groundhog day every day, said Mr Williamson.” “There's a degree of boredom in it for the farmer. But you get nothing else done.”

The Federal government's promises of monetary relief, including almost doubling its relief fund to $1.8bn, are doing little to appease the farmer's stress.

“I'm not sure throwing money at it is going to fix the problem,” Mr Williamson said.

“We need realistic solutions to help feed the animals, and we'd love some help, physical help.

“I heard someone talking the other day about mobilising the defence force. Get someone up here to sit on our tractor and take the feed out while we fix the fences would be just awesome."

And as farms continue to suffer through the dry conditions, regional businesses are also hurting. In nearby Armidale, business is drying up. Business is drying up in regional towns like Armidale due to the drought. (SBS News)
SBS News

"I think things are subdued just because that disposable income is reduced and people are doing it really hard,” Anthony Fox, president of the Armidale Business Chamber, said.

“Businesses in town and country people, farmers and graziers, are intertwined. They've been intertwined from a business perspective and emotionally.”

Michelle Wheatley's bookstore and wine bar in Armidale are still turning a profit. But she said all shop owners are trying to stay strong - and are focused on supporting farmers.

"We just count ourselves as really lucky,” Ms Wheatley said. 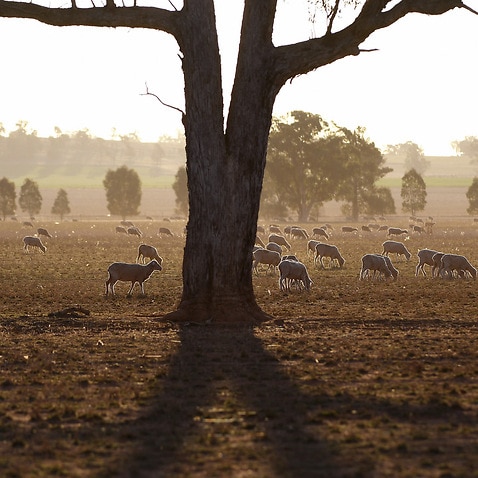 “Even businesses that aren't doing well are still offering to fundraise or apportion their sales, or any other initiatives to help ."

As for citysiders, Andrew Williamson believes there are other ways to help.

“Come and visit. Come and spend your money in the local area, I think that's a great solution. If you're gonna take a holiday, take it regionally this year,” he said.