The former prime minister believes the nation's way of life is under threat, pointing to rules against people sitting in the front seat of taxis, which he considers a mark of being Australian.

Former prime minister Tony Abbott has warned coronavirus health measures could threaten Australia's way of life while launching a strike against turning to experts for answers.

The recently appointed Institute of Public Affairs fellow has released a video address to the right-wing think tank questioning the impacts of pandemic rules.

"For a full year we've let a virus dominate our lives and in the process put safety before freedom, prudence before courage and avoiding danger before accepting risk," he said.

"Even though courage, conviction and character remain vital to our success as a people." "That will only get harder to the extent we've become conditioned to have experts give us all the answers and to have governments then tell us what to do," he said.

The Howard government health minister suggested the "pursuit of safety" was a mirage.

Mr Abbott believes the nation's way of life is under threat, pointing to rules against people sitting in the front seat of taxis, which he considers a mark of being Australian.

"But like so much, that's currently against the rules along with singing, dancing and having too many friends and family around for a barbecue," he said.

"Thanks to the pandemic, we're now told to form orderly and socially distanced queues - as if we were English." The former prime minister was born in London and has been working for the British government as a trade adviser.

"But it takes a fair dose of virus hysteria and health despotism for Australians to be barred from Victoria without first getting a visa," he said.

The ex-Liberal leader said lives had been saved but businesses ruined, families separated and old people forced to spend their final days in isolation.

He also hit out at "absurd" rules like compulsory face masks while driving in a car alone which featured in Brisbane's three-day mini-lockdown. NSW Police cleared Mr Abbott of breaking coronavirus during Sydney's northern beaches lockdown after he was seen cycling in a zone he did not live in.

Mr Abbott also questioned whether Australia's military was ready to put troops' lives on the line to defend Taiwan if China launched an invasion.

On education, he said Indigenous, Asian and sustainability perspectives were embedded in every element of school curriculum.

"James Cook, Arthur Phillip and people like Sir John Monash and Lord Florey to name just a few of our heroes, where's the push to put them on their well-deserved pedestal?"

Mr Abbott said his IPA role would look at cultural issues "upstream of politics" to renew the country. 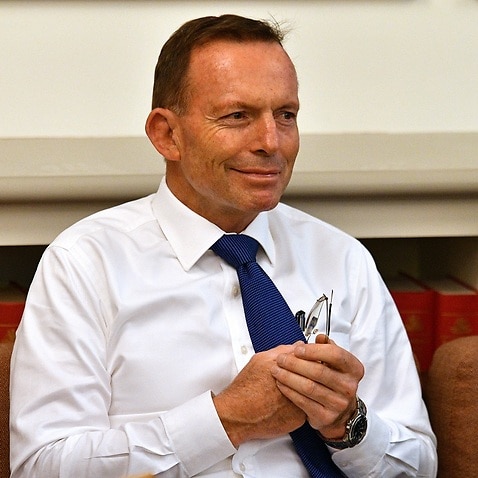 "That won't come from deconstructing our history or our heroes. Or by imported fads of sports stars taking a knee," he said.

"After a lost year it is time for a reset - but not a politically correct woke reset that seems to be brewing."