Emergency services say ex-Tropical Cyclone Kimi still poses a risk and people should remain vigilant, warning another cyclone could form as early as next week.

Cyclone Kimi has weakened to a tropical low off north Queensland, but emergency services are warning of possible flooding and another cyclone could form as early as next week.

Coastal residents have been spared the worst after the cyclone weakened from a category two system to a storm, sitting 135km north of Townsville, on Tuesday morning.

The Bureau of Meteorology says the system still has wind gusts of up to 95km/h and will bring heavy downpours to the region with a flood warning for rivers between Innisfail and Bowen on Tuesday and Wednesday.

While Ex-Tropical #CycloneKimi has weakened into a tropical low there are still impacts to be felt from rainfall and strong winds in the North Tropical Coast as the Bureau continues to monitor the system presently offshore. Stay up to date with #QLDweather https://t.co/hL595b01Eg pic.twitter.com/u6jgI59elA

"We're still well within a severe weather event - very strong winds, and a lot of heavy rain - so that flash flooding and general flooding warning remains in place," he told Seven's Sunrise program.

"So we ask people to remain vigilant and can I just please stress to people that if it's flooded, forget it.

"We still have emergency response crews in place, south from Cairns and north from Townsville, so the emergency still exists, while we're not dealing with a tropical cyclone we're still in a very dangerous weather pattern." 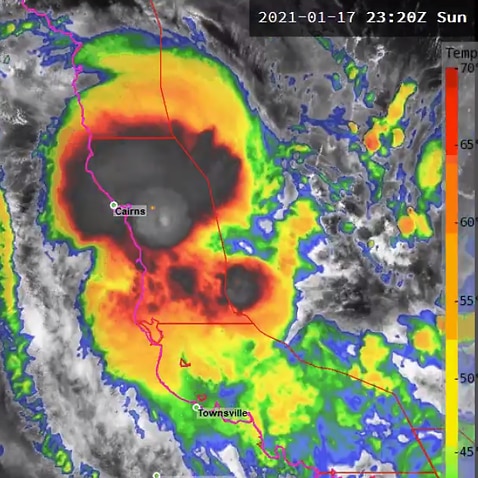 Mr Bolger said swiftwater rescue crews, helicopters and flood boats were standing by to deal with any flood rescues.

A flood watch has been issued for waterways including the Mulgrave, Russell, Johnstone, Tully, Murray, Herbert, Black, Haughton, Ross and Bohle rivers.

"Can I remind everyone that we already only in January in a La Nina year, we are expecting wet weather for a protracted period," he said.

"People need to listen to the messaging, they need to do the right thing and stop putting themselves at risk, so if it's flooded, forget it."

Ex-Tropical Cyclone Kimi has weakened into a tropical low, still slow moving 135km northeast of Townsville. The weakening low is expected to move northwest tomorrow. There will be no further track maps issued unless the system reintensifies. #CycloneKimi https://t.co/99wWFC8jCz pic.twitter.com/7yQkGvYHGy

Bureau of Meteorology senior forecaster David Grant said the risk could intensify with a monsoon trough possibly hitting the region over the weekend and next week.

He also said it was possible that another cyclone could form in the next two weeks.

"We just have to be mindful that Mother Nature hasn't quite turned the tap off just yet," Mr Grant told reporters.

"There could be further rainfall around the state's far north and the east in the coming week, and yeah, we may be talking about cyclones once again sometime in the next week or two."