It's the latest expression of anger in the Muslim world over the use of cartoons of the Prophet Mohammed in France.

Turkish President Recep Tayyip Erdogan on Monday joined calls for a boycott of French goods, ramping up a standoff between France and Muslim countries over Islam and freedom of speech.

President Erdogan has led the charge against President Emmanuel Macron over his robust defence of the right to mock religion following the murder of a French schoolteacher who had shown his class cartoons of the Prophet Mohammed.

On Monday, the Turkish leader added his voice to calls in the Arab world for citizens to spurn French goods.

"Never give credit to French-labelled goods, don't buy them," Mr Erdogan, who caused a furore at the weekend by declaring that Mr Macron needed "mental checks," said Mr Erdogan during a televised speech in Ankara. After Turkey was accused by France of remaining silent over French teacher Samuel Paty's killing on 16 October, Mr Erdogan's spokesman, Ibrahim Kalin, on Monday denounced the "monstrous murder", adding "nothing" could justify the attack.

French goods have already been pulled from supermarket shelves in Qatar and Kuwait, among other Gulf states, whereas in Syria people have burned pictures of Macron and French flags have been torched in the Libyan capital Tripoli. A spot of French products is covered with a placard reading in Arabic 'French products are being boycotted for the sake of the Prophet Muhammad peace upon him',
AAP

The 16 October beheading of Mr Paty by a Chechen extremist caused deep shock in France.

Mr Paty had shown his pupils some of the Prophet Mohammed cartoons over which 12 people were massacred at the satirical magazine Charlie Hebdo in 2015.

Depictions of the Prophet Mohammed are seen as offensive by many Muslims, but in France such cartoons have become identified with a proud secular tradition dating back to the Revolution.

In the aftermath of Mr Paty's murder, President Macron issued a passionate defence of free speech and France's secular values, vowing that the country "will not give up cartoons". 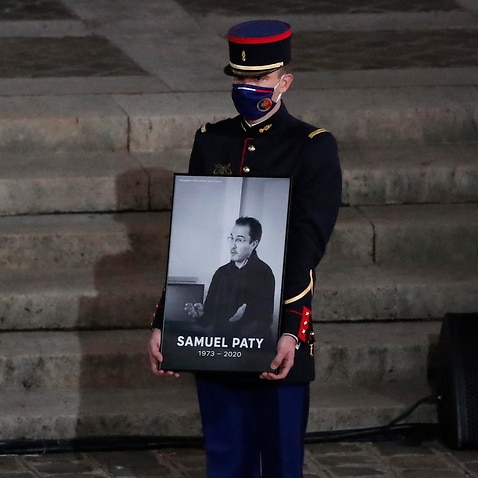 As the backlash over France's reaction widened, European leaders rallied behind Mr Macron.

"They are defamatory comments that are completely unacceptable, particularly against the backdrop of the horrific murder of Mr Paty by an Islamist fanatic," German Chancellor Angela Merkel's spokesman Steffen Seibert said.

The prime ministers of Italy, the Netherlands and Greece also expressed support for France, as did European Commission president Ursula von der Leyen.

"President Erdogan's words addressing President @EmmanuelMacron are unacceptable," Dutch Prime Minister Mark Rutte tweeted, adding that the Netherlands stood "for the freedom of speech and against extremism and radicalism". French products have been removed from the shelves of several Muslim countries including Lebanon, Saudi Arabia, Jordan and Kuwait.
EPA

Mr Erdogan on Monday compared the treatment of Muslims in Europe to that of Jews before World War II, saying they were the object of a "lynching campaign". France has been targeted in a string of jihadist attacks that have killed over 250 people since 2015 and led to deep soul-searching over the impact of Islam on the country's core values.

Some of the attackers have cited the Mohammed cartoons as well as France's ban on wearing the Islamic face veil in public among their motives.

Several suspected Islamist radicals have been arrested in dozens of raids since Mr Paty's murder, and about 50 organisations with alleged links to such individuals have been earmarked for closure by the government.

Earlier this month, <r Macron unveiled a plan to defend France's secular values against a trend of "Islamist separatism," and described Islam as a religion "in crisis".

His stance has fuelled tensions with Turkey particularly.

On Saturday, Paris announced it was recalling its envoy to Ankara after Mr Erdogan, who has styled himself a defender of Muslims worldwide, questioned Mr Macron's sanity.

But Mr Macron on Sunday was defiant on Twitter.

"We will not give in, ever. We respect all differences in a spirit of peace. We do not accept hate speech and defend reasonable debate. We will always be on the side of human dignity and universal values," he said. 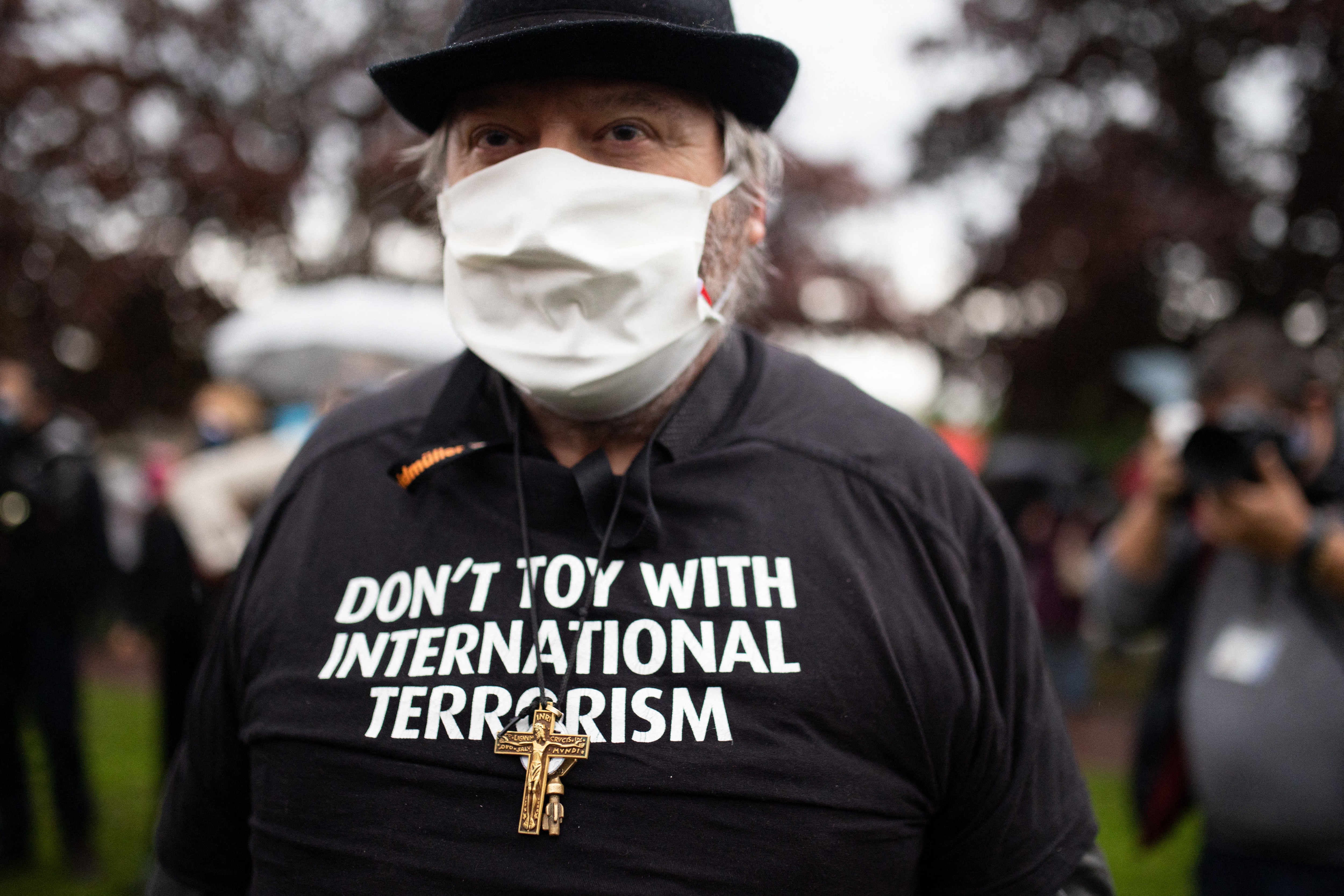 People wearing a shirt Don't toy with international terrorism gather at the middle school in Conflans-Sainte-Honorine, northwest of Paris, on 20 October, 2020.
ABACA

Macron has also drawn fire in other Muslim-majority countries.

A few dozen anti-Macron protesters rallied for the second day in a row in the Gaza Strip, stamping a photo of the French president with a red cross covering his face on the French cultural centre's facade. 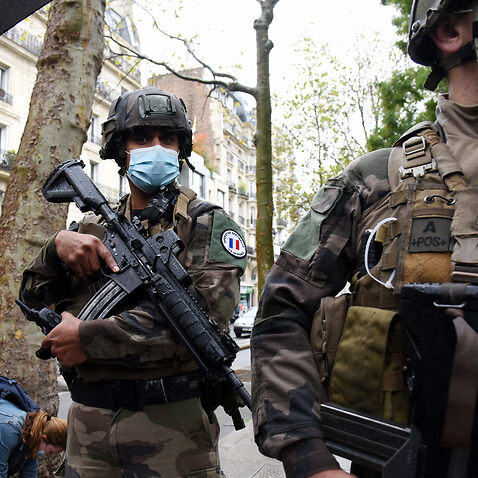 More protests are planned on Tuesday in Amman.

France's largest employers' federation on Monday urged companies to "resist the blackmail" over the boycott calls.

"There is a time to put principles above business," Medef chief Geoffroy Roux de Bezieux told broadcaster RMC. "It is a question of sticking to our republican values."