Malcolm Turnbull refuses to be drawn into America's debate over gun control in the wake of the Florida high school shooting.

Prime Minister Malcolm Turnbull has said he will not get involved in the gun control debate that is raging across the US since last week's Florida high school shooting.

Speaking after meeting US President Donald Trump at the White House, Mr Turnbull said: “It’s not for me to get involved in a contentious domestic political debate here." 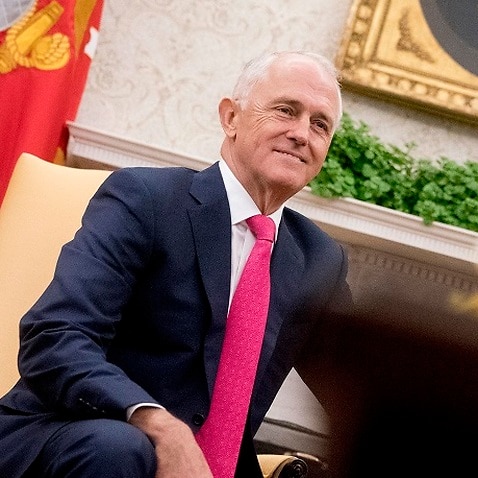 PM: Joyce made 'right decision' to resign as Nationals leader

Mr Turnbull’s comments come despite Mr Trump being consumed by the issue of gun control in recent days, with Australia being used as a shining example of gun reform.

Both Mr Turnbull and Mr Trump touted the long history of "mateship" between their two nations during the joint press conference in Washington.

This was Mr Turnbull's first visit to the White House since their now infamous phone call last year when Mr Trump reportedly declared his conversation with the prime minister as his "worst call by far".

But it seems all that was forgotten when the two leaders announced the US would be naming one of its combat ships the USS Canberra after Australia's capital.

"What a great symbol of our alliance and our shared security endeavours, what an extraordinary statement of commitment," Mr Turnbull said.

The warmth was reciprocated by Mr Trump, who declared: "The United States and Australia are currently honouring 100 years of mateship, a term that you use very beautifully, Mr Prime Minister.

"As she sails the open sea, the new USS Canberra will symbolise ... the enduring friendship between the United States and Australia. There is no closer friendship."

During the press conference, Mr Trump again said the Trans-Pacific Partnership was "not a good deal" for the United States, saying he preferred to strike bilateral deals.

Asked President Trump @POTUS if he’d like a presidential visit to Australia: “I would, absolutely, great place, love it” #auspol @SBSNews pic.twitter.com/3Tng1GGuMx

"I like to negotiate and if it doesn't work out, you terminate. Please, if you can fix the deal, you fix the deal," Mr Trump said.

"When you get into multilateral, you can't get into that. TPP was terrible for the United States, would have cost us a tremendous amount of jobs, it would have been bad.

"But there is a possibility we would go in if there is a much better deal. We would love to have Australia involved and I think Australia wants us to stay involved."

The president and First Lady Melania Trump also met the prime minister and wife Lucy Turnbull on the South Lawn of the White House on Friday.

They then moved to the Oval Office where the couples sat on chairs and couches.

Mr Trump added they would engage in a "big meeting" and a "luncheon set up also".

"A lot of good things will come out of this," the president said.

Mr Turnbull said it was the 100th anniversary of the World War I battle for Hamel in France where Australian and US forces first fought together.

"Thank you and Melania for your hospitality and friendship," Mr Turnbull said.

The leaders are expected to discuss tough new sanctions Mr Trump announced against North Korea, trade, security in the Indo-Pacific and infrastructure investment before holding a joint press conference with the White House press corps and Australian journalists.