Prominent Liberal backbencher Dean Smith is urging the Coalition government to establish an inquiry to evaluate immigration policy and its impact on Australia’s population.

Prime minister Malcolm Turnbull said he had received a letter from the senator and would "sit down and have a talk about it".

"I have to say, the immigration program is being run better than ever. Our borders are secure," Mr Turnbull told reporters in Melbourne.

"The Senate often inquires into many things and that's part of its job."

The prime minister said there was "plenty of scope" for an inquiry but did not commit to supporting one.

Senator Smith said lowering immigration levels could “perhaps give ourselves some time to breathe, some time to pause and reflect”.

The senator’s calls for a parliamentary inquiry or audit come after new Home Affairs data revealed Australia’s intake of permanent migrants fell to its lowest level in 10 years under the Turnbull government. 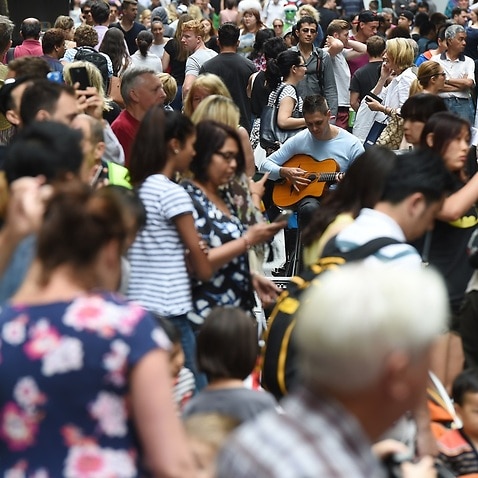 The drop has alarmed the business community but has been well-received by voters, according to a recent News Corp opinion poll.

Senator Smith said hitting the 25 million population mark this year was a “cause for celebration” because of the “modernity … cultures and practices” that came with a bigger country.

But he said the fact the country reached the milestone nine years earlier than predicted by the Howard government modelling was a cause for concern.

“[We need] to make sure the predictions are the best they can be and if they’re not, let’s correct that. Importantly, to make sure the infrastructure spending and public confidence is maintained,” Senator Smith said. The backbench senator, who rose to public prominence through his advocacy for the Yes vote on same-sex marriage, told the ABC’s National Wrap program the “tone” of the inquiry would be important.

But he said he was confident a national debate on immigration could be conducted respectfully without falling into xenophobia.

“We’ve seen in previous debates that you can have a civilised national discussion around difficult or sensitive issues if parliamentarians if commentators get the tone right,” he said.

Labor leader Bill Shorten said he would consult colleagues about the idea and "see what they say", speaking with reporters in Tasmania on Monday.

He said the government had been "asleep at the wheel" in allowing an "explosion" in temporary working visas, even though the permanent migration rate had dropped.

Australia took in 20,000 fewer permanent migrants in the financial year just passed than in the previous year, mostly thanks to a 12,000 cut in skilled visa places and an 8,000 cut in family visas.

Mr Shorten said the Coalition “should realise that some level of immigration generates economic growth”, but did not explicitly oppose the drop.

Fellow Labor frontbencher Anthony Albanese said the drop was a “good result” if there was more “integrity” in the system.