How do you turn statistics into art? Sydney's Campbelltown Arts Centre is attempting it with a new exhibition - and presenting a fresh look at Western Sydney.

A new art exhibition will explore the changing faces - and numbers - behind one of Australia's biggest multicultural districts.

The exhibition 'looking at me through you' enlisted a group of artists to incorporate statistics from Deloitte Access Economics into a series of contemporary art pieces that reflect and challenge people's perceptions of greater Western Sydney.

Campbelltown Arts Centre will showcase the works from May 27 to July 23.

"We asked 12 artists to look at Western Sydney through statistics, which are very neutral and subjective, and come up with some ways to tell the Western Sydney story through contemporary art," director Michael Dagostino said.

"Rather than looking at the negative stereotypes that are portrayed in the media and other people's lenses, we look through it and say 'look, there's different possibilities'."

The pieces include models, portraits and short films exploring multiple themes unfolding throughout Campbelltown and beyond, ranging from urban development to political and cultural identity.

Artist James Nguyen chose to focus on the changing nature of land usage by creating a communal herb garden in the Arts Centre's amphitheatre, inspired in part by his Vietnamese heritage.

"When you're a migrant one of the first things to prove that you're a contributing member of society is to acquire land, to build your own home, start your family," he said. "So it's that whole thing of linking success to settlement." But Nguyen added that many migrants ignore the history of the land they now occupy.

"A lot of migrants feel they don't have the responsibility of acknowledging Aboriginal sovereignty," he said.

"The reality is you have to deal with the histories that are already there. As migrants, I think there's a role for us to acknowledge that sovereignty."

Damien Shen, an artist of Chinese and Indigenous descent, was also keen to illustrate Campelltown's Indigenous history and legacy.

After meeting with local elder Aunty Glenda Chalker, he painted portraits of her, along with her son and grandson.

"I've always been fascinated with people's faces," he said. "The history is often in the skin.

"You see the face, you're looking into the eyes, and you can almost get a sense of what someone's soul is like. I find it quite gripping." 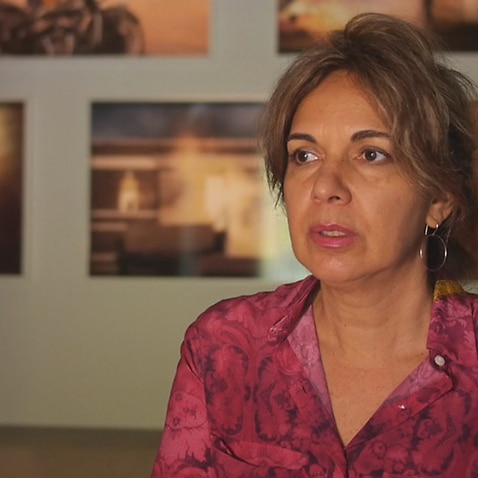 Indigenous artist Shevaun Wright took a more literal approach by converting data from Socio-Economic Indexes for Areas (SEIFA) into a string of vinyl lettering stuck to the floors of several rooms throughout the gallery.

"I thought it could run as a thread through the show, bringing the works together," she said.

Now based in Los Angeles, Wright said she used her background as a lawyer to incorporate data showing compensation figures for personal injuries.

"I've worked as a lawyer for six years and worked as a paralegal in personal injury law," she said. "I wanted to equate the under-investment of relative disadvantaged suburbs with bodily injuries."