Australian doctors and lawyers are also calling for detainees to be released including a two-year-old girl being held in a Melbourne detention centre.

"Considering the lethal consequences a COVID-19 outbreak would have, they should be released without delay. Migrant children and their families and those detained without a sufficient legal basis should be immediately released,” they said in a statement. Detainees fear they will get coronavirus.
AAP

Last month, the United Nations decided to suspend resettlement travel for refugees over fears they could become stranded as countries drastically reduce entries over the COVID-19 pandemic.

The UN agencies for refugees and for migration jointly announced that they were taking steps to temporarily suspend departures by people already living as refugees who had been approved to be resettled in third countries.

In Australia, the Australasian College for Infection Prevention and Control (ACIPC) has echoed calls for asylum seekers and migrants to be released.

“We understand that around 1,400 asylum seekers and other non-citizens are being held in detention in crowded conditions that would preclude adequate social distancing or self-isolation,” an ACIPC spokesperson said. 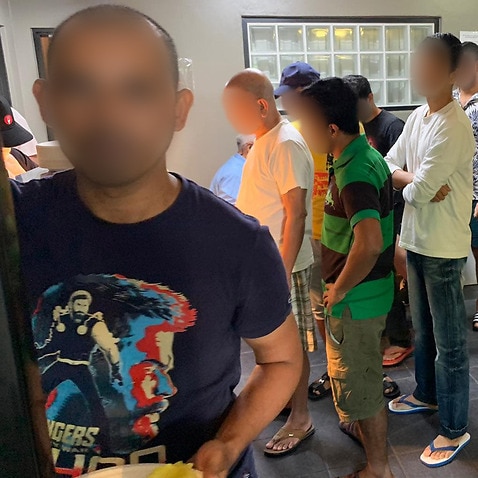 “This would potentially pose a risk to their health in the event of an outbreak of COVID-19, as outbreaks in other crowded settings, including detention facilities, have been well documented to date.”

Citing concerns for not only detainees, but also detention facility staff and the broader Australian community as a whole, ACIPC is urging the Federal Government to consider moving detainees into houses in the community.

"As a minimum standard, we would recommend that detainees should be held in single rooms with their own bathroom facilities.”

A petition launched last month by Sydney-based Human Rights 4 All (HR4A), calling for people in Australian detention centres has been signed by 37,000 people.

HR4A director principal Alison Battisson said she was extremely worried about the health and safety of people inside the centres, including her youngest client, two-year-old Isabella, who has been in immigration detention in Melbourne since her birth. Isabella Lee Pin Loong was born in detention in Melbourne where she remains with her mother.
Human Rights For All

Ms Battisson said the situation had worsened since the petition was launched.

“The government’s response was to move more people into her living area, the area she currently has access to,” Ms Battisson said. “She’s two years old, is underweight, so she is a prime candidate for getting COVID-19 then having a very severe reaction to it."

Ms Battisson said Isabella's existing medical issues meant she should be treated as someone at particular risk of contracting coronavirus.

In response, a Home Affairs spokesperson said there were no confirmed cases of COVID-19 in the immigration detention network.

“As community transmission of COVID-19 increases within Australia we are focused on preventing the entry of COVID-19 into all detention facilities.

"We continue to follow the advice of the Department of Health and other health officials. Infection control plans are in place and plans to manage suspected cases of COVID-19 have been developed and tested.”