The heaviest exchange of fire in years, sparked by unrest in Jerusalem, has killed 197 in Gaza since Monday, along with 10 in Israel, according to authorities on both sides.

Israeli strikes killed 42 Palestinians in the Gaza Strip on Sunday, the worst daily toll yet in almost a week of deadly clashes, as the UN Security Council met amid global alarm at the escalating conflict.

UN Secretary-General Antonio Guterres pleaded for an immediate end to the "utterly appalling" violence and warned of an "uncontainable security and humanitarian crisis".

But the council meeting, already delayed by Israel's ally the United States, resulted in little action.

The current violence in Gaza & Israel only perpetuates the cycles of death, destruction & despair, and pushes farther to the horizon any hopes of coexistence & peace.

The @UN is actively engaging all sides towards an immediate ceasefire.

The heaviest exchange of fire in years, sparked by unrest in Jerusalem, has killed 197 in Gaza since Monday, along with 10 in Israel, according to authorities on either side.

Israel said Sunday morning its "continuing wave of strikes" had in the past 24 hours struck over 90 targets across the crowded coastal enclave, where an Israeli strike that destroyed a building housing journalists' offices sparked international outrage.

The death toll kept rising in Gaza on Sunday as rescuers extracted bodies from vast piles of smoking rubble and the bereaved wailed in grief.

"We were sleeping and then all of a sudden there were rockets raining down on us," said Lamia al-Koulak, 43, who lost siblings and children in the dawn bombardment.

"The children were screaming. For half an hour we were bombarded without prior warning. We came out to find the building next door flattened."

"Our campaign against the terrorist organisations is continuing with full force. We are acting now, for as long as necessary, to restore calm and quiet to you, Israel's citizens," he said in a televised address.

Rockets have wounded over 280 people, hitting districts that had previously been well beyond the range of Hamas rockets.

"Hamas misjudged the strength of our response," he said on Sunday. 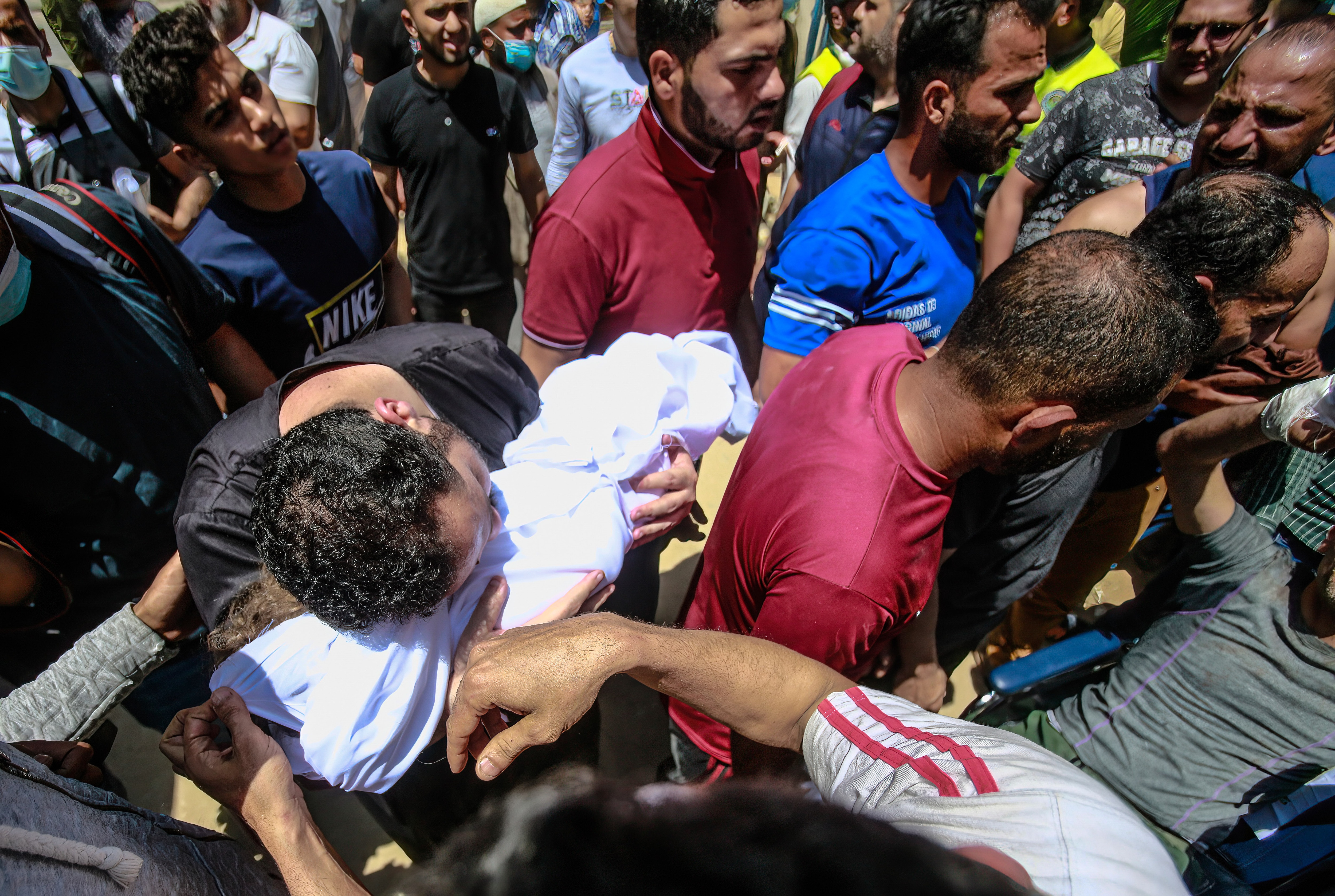 Palestinians carry the body of a Palestinian child who was killed in an Israeli airstrike.
LightRocket via Getty Images

At least 58 children have died in Gaza, local health authorities said, more than 1,200 people have been wounded and entire city blocks smashed to rubble.

Gaza health authorities said 40,000 people had been displaced from their homes since Monday.

Save the Children warned that life-saving services were "at breaking point" after Israeli strikes damaged power lines. But Israel's UN ambassador blamed Gaza militants for the bloodshed.

"It was completely premeditated by Hamas in order to gain political power," Gilad Erdan said.

The Israeli army said it had targeted the infrastructure of Hamas and Islamic Jihad, including a vast tunnel system, weapons factories and storage sites.

Israeli air strikes also hit the home of Yahya Sinwar, head of Hamas's political wing in Gaza, the army said, releasing footage of plumes of smoke and intense damage, but without saying if he was killed.

Balls of flame and a cloud of debris shot into the sky Saturday afternoon as Israel's air force flattened the 13-floor Gaza building housing Al Jazeera and the AP news agency, after giving journalists just an hour to evacuate. Photos show the Jala Tower, housing international media outlets in Gaza city, being hit by an Israeli air strike and collapsing on 15 May, 2021.
AFP via Getty Images

"So it is a perfectly legitimate target," Mr Netanyahu told CBS News. "I can tell you that we took every precaution to make sure that there were no civilian injuries, in fact, no deaths."

The conflict has sparked inter-communal violence between Jews and Arab-Israelis, and deadly clashes in the West Bank, where 19 Palestinians have been killed since Monday.

A rocket on Sunday damaged a synagogue in the southern Israeli city of Ashkelon, shortly before prayers for the Shavuot Jewish holiday.

And a car-ramming attack wounded six police officers in the flashpoint Sheikh Jarrah neighbourhood of east Jerusalem on Sunday, police said, adding that the attacker was "neutralised". Sheikh Jarrah has been at the heart of the flare-up in violence, seeing weeks of clashes between Palestinians and Israeli security forces who have cracked down hard on protests against the planned expulsion of several Palestinian families from their homes there.

Palestinians have also been outraged by police actions against worshippers protesting at the flashpoint Al-Aqsa mosque compound.

China on Sunday accused the US of blocking a UN Security Council statement on the violence. 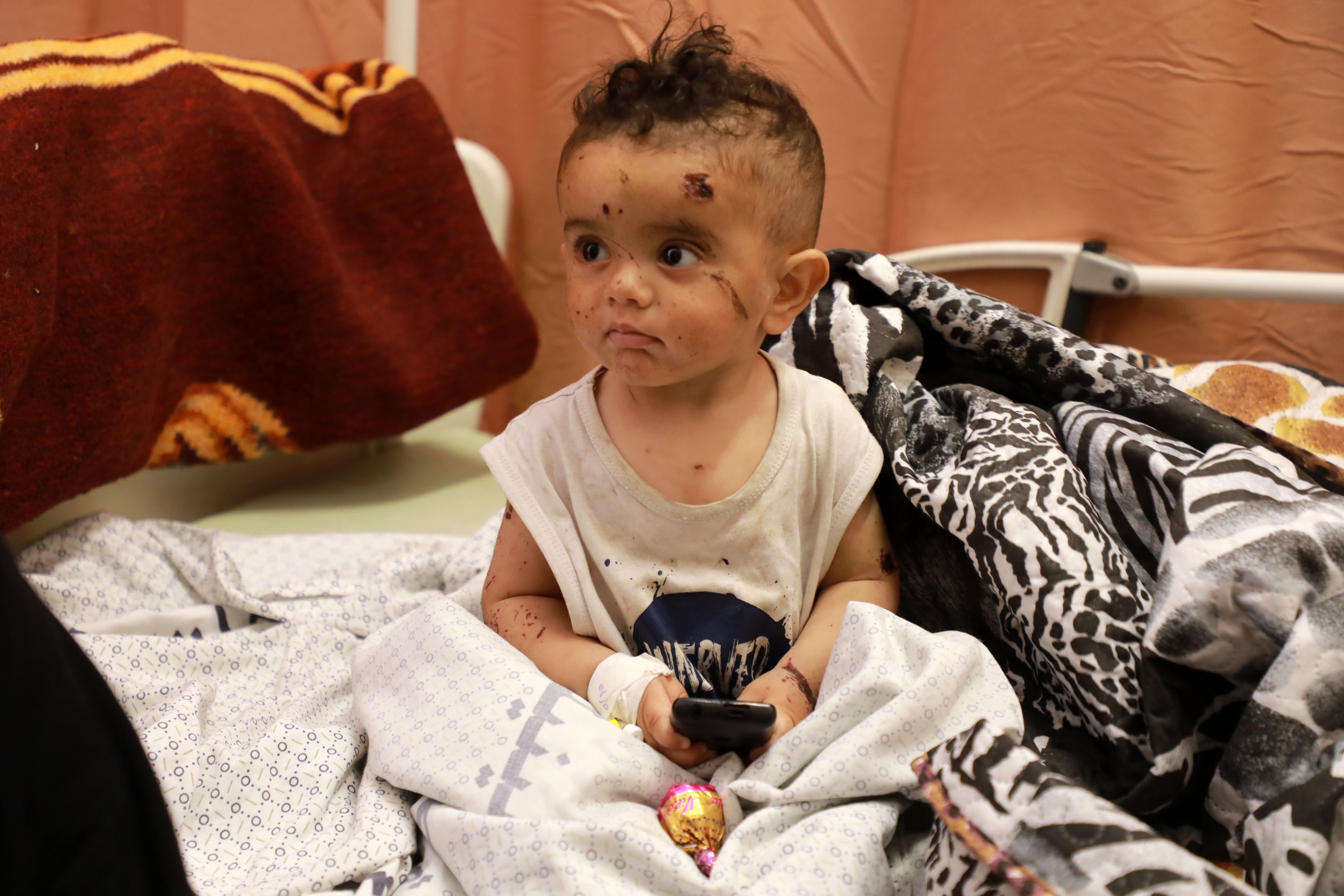 A Palestinian child, who was wounded in Israeli air strikes on the Gaza Strip, receives treatment at Al-Shifa Hospital on 16 May, 2021.
NurPhoto via Getty Images

"Simply because of the obstruction of one country, the Security Council hasn't been able to speak with one voice," said Foreign Minister Wang Yi.

"We call upon the United States to shoulder its due responsibilities."

The United States, Israel's main ally, had delayed the council session and has shown little enthusiasm for a resolution.

President Joe Biden's administration says it is working behind the scenes and that a Security Council statement could backfire.

The Biden administration has publicly backed Israel's right to self-defence, while urging de-escalation.