The far-right leader, who has been heavily criticised for his handling of the pandemic, has said that he would be the "last Brazilian" to receive a COVID-19 vaccine. 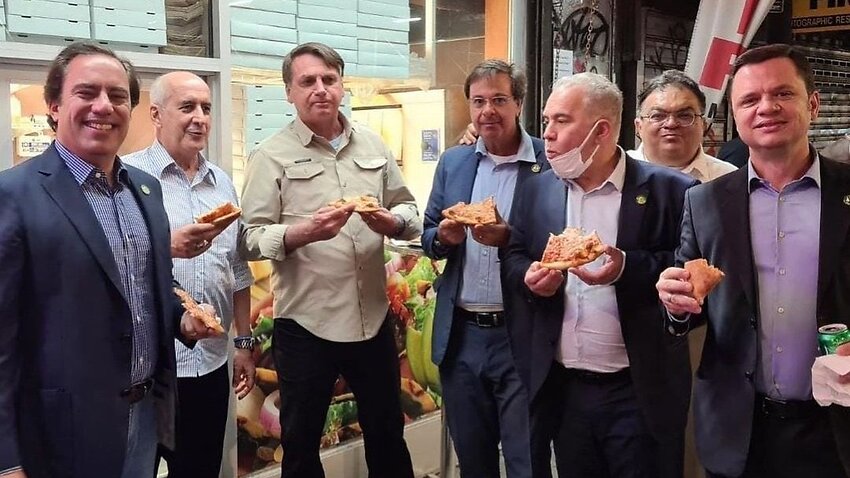 Brazilian President Jair Bolsonaro has been pictured eating pizza on the sidewalk in New York ahead of the UN General Assembly, likely because he doesn't meet the city's COVID-19 vaccine requirements for indoor dining.

The city currently requires anyone wanting to eat inside to provide proof of at least one shot and Mr Bolsonaro says he is not vaccinated.

"Luxury dinner in New York," tweeted Brazil's secretariat minister Luiz Eduardo Ramos alongside a photo of Mr Bolsonaro enjoying a slice outside with several members of his delegation.

Tourism Minister Gilson Machado also posted a photo of Mr Bolsonaro with slice in hand, writing on Instagram that it was pizza and Coca-Cola for dinner.

"Bolsonaro likes to play humility... but it is not a question of taste," said Brazilian columnist Reinaldo Azevedo, pointing out New York's vaccine requirements.

The city began enforcing a vaccine mandate last week, requiring proof of at least one shot for many indoor activities, including dining, entertainment venues and gyms.

The local government wrote to the president of the United National General Assembly stressing that the debate hall for this week's high-level meeting was a convention center, meaning all delegates must be vaccinated.

The UNGA president, Abdulla Shahid, initially backed the requirement but then backtracked, ruling that entry to the UN headquarters for the debate will be run on an "honor system", with no proof of vaccination required.

As is tradition, Brazil's president is due to give the first speech at the session on Tuesday.

Mr Bolsonaro, heavily criticised for his handling of the pandemic, has said that he would be the "last Brazilian" to receive a COVID-19 vaccine, 222 million doses of which have already been administered in his country.

Mr Bolsonaro arrived in New York City on Sunday evening, with Brazilian media reporting that he had to use the back door to enter his hotel to avoid demonstrators shouting "Get out Bolsonaro!" at the main entrance.