Described as a "titan of the civil rights movement" the long-serving US congressman died of pancreatic cancer, aged 80.

John Lewis, the revered civil rights pioneer who marched with Martin Luther King Jr and nearly died from police beatings before serving for decades as a US congressman, has died at age 80.

Mr Lewis became an icon of the 1960s civil rights movement and landmark peace marches of the era. 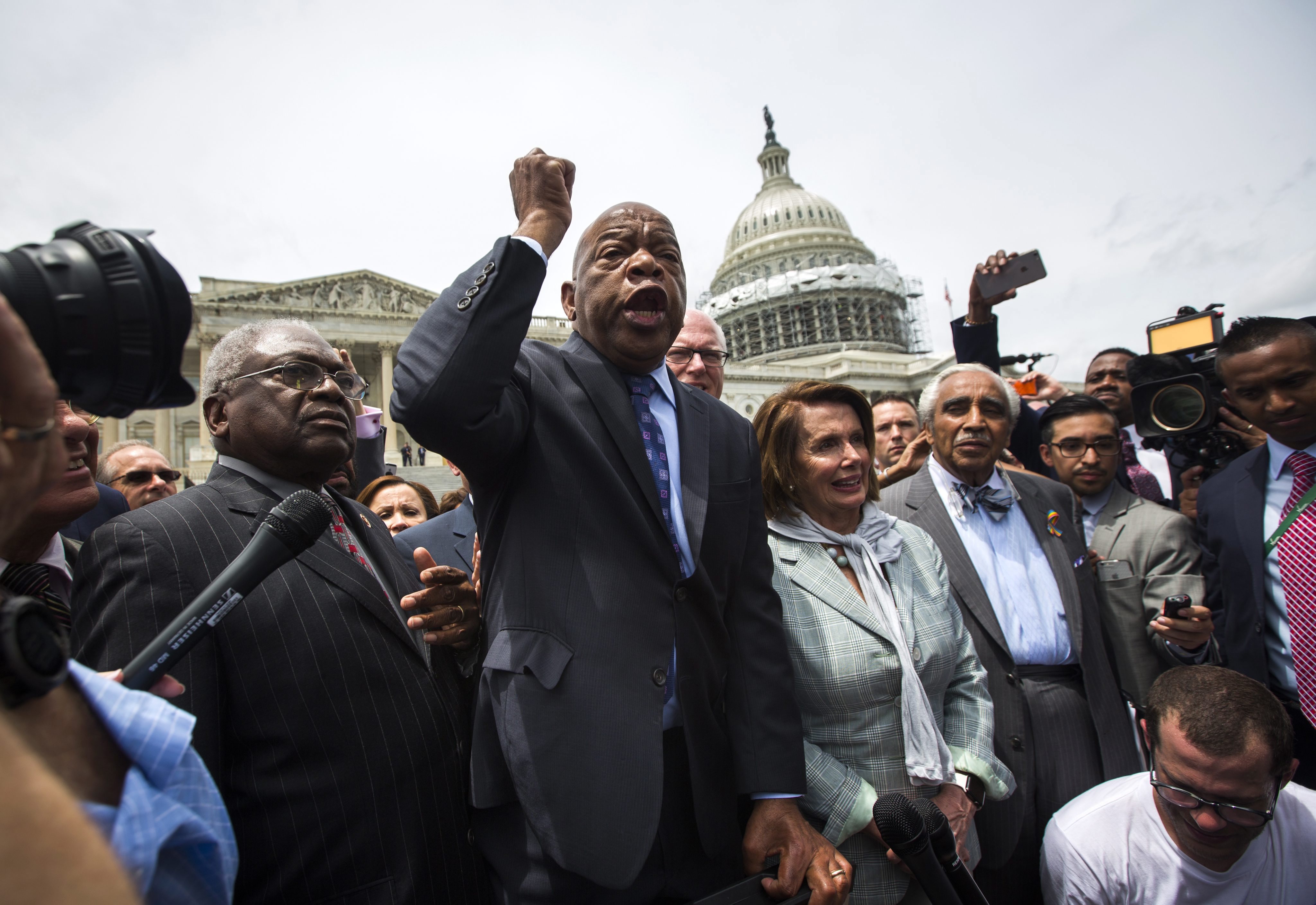 John Lewis is being described as a "titan of the civil rights movement."
AAP

He was a notable speaker at the 1963 March on Washington and in the consequential 1965 march in his native Alabama.

Mr Lewis kept up the fight for civil rights until the end of his life. He made his last public appearance in June, as protests for racial justice swept the United States and the world.

Using a cane, he walked with Washington, DC Mayor Muriel Bowser on a street by the White House that Ms Bowser had just renamed Black Lives Matter Plaza, which had just been dedicated with a large yellow mural - large enough to be seen from space - reading "Black Lives Matter."

.@RepJohnLewis was a titan of the civil rights movement whose goodness, faith and bravery transformed our nation. Every day of his life was dedicated to bringing freedom and justice to all. pic.twitter.com/xMbfAUhLUv

House Speaker Nancy Pelosi saluted the stalwart Democrat as "one of the greatest heroes of American history," calling him "the conscience of the Congress."

"John Lewis was a titan of the civil rights movement whose goodness, faith and bravery transformed our nation - from the determination with which he met discrimination at lunch counters and on Freedom Rides, to the courage he showed as a young man facing down violence and death on Edmund Pettus Bridge, to the moral leadership he brought to the Congress for more than 30 years," Ms Pelosi said in a statement.

John Lewis was a giant among men. A Civil Rights Icon, an indefatigable champion for justice, and a hell raiser known for making ‘good trouble.’

In mourning his passing, let us aspire to build the nation that Congressman Lewis believed it could be.

May he Rest In Peace. pic.twitter.com/sDJ169T9bE

That march ended with violence from Alabama state troopers against peaceful protesters. Public outrage at brutal news images of police beating Mr Lewis and others is credited with spurring the passage of the 1965 Voting Rights Act. In 1981, Mr Lewis was elected to serve on the Atlanta City Council where he advocated for ethics in government and neighbourhood preservation until his election to Congress in 1986. 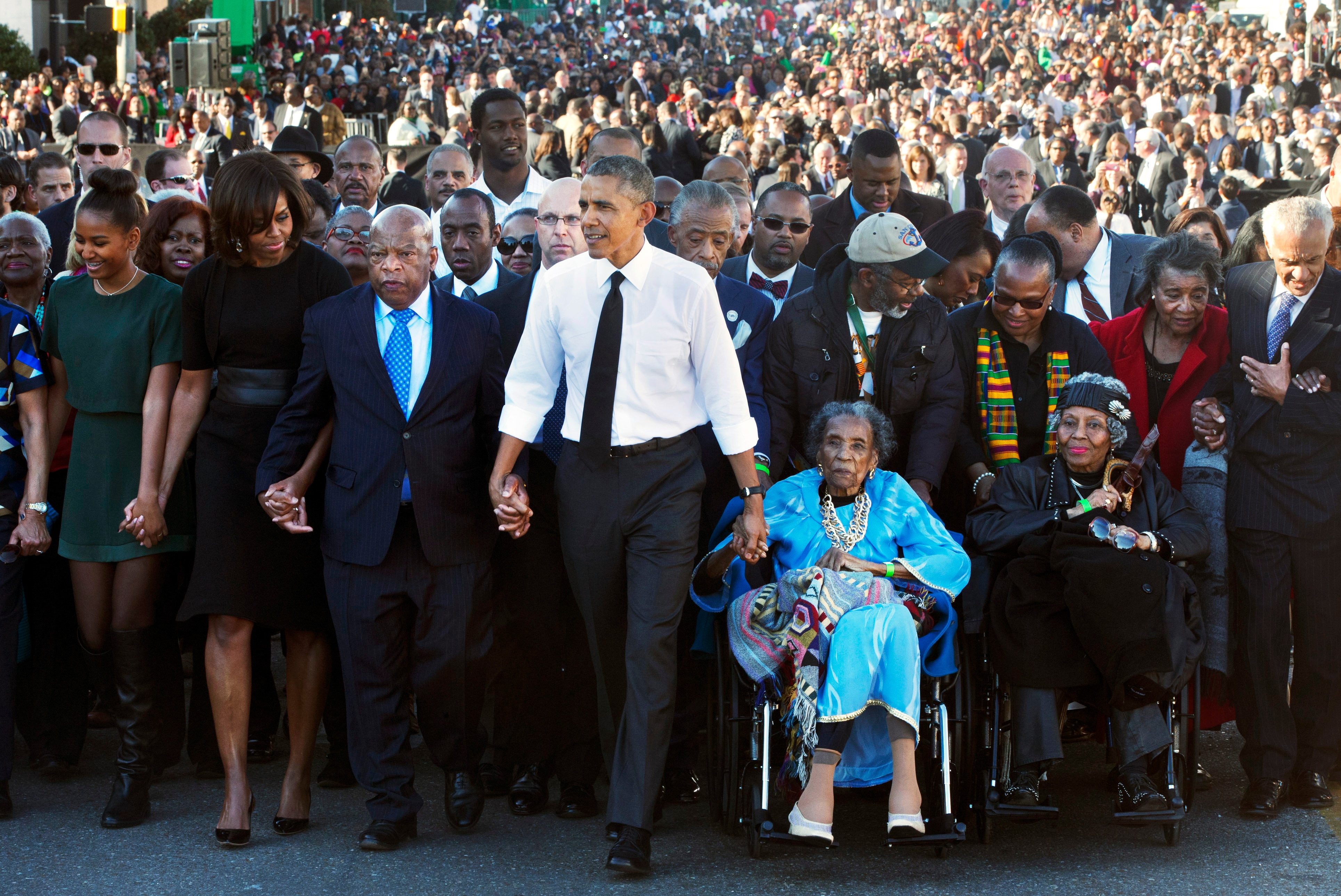 Born to sharecropper parents in Troy, Alabama on 21 February 1940, Mr Lewis was recognised for stirring up what he called, "good trouble."

Inspired by the civil protests in Montgomery, Alabama led by Mr King, Mr Lewis became a student leader during his undergraduate career at Fisk University where he organised sit-in demonstrations at segregated lunch counters in Nashville, Tennessee.

In 1961, he risked his life by participating in the famous freedom rides, which tested southern segregation laws. Tributes poured in from other politicians as well.

"John Lewis was an icon who fought with every ounce of his being to advance the cause of civil rights for all Americans," said Senator Kamala Harris, the first African American to represent California in the Senate, on Twitter. "I'm devastated for his family, friends, staff - and all those whose lives he touched."

John Lewis was an icon who fought with every ounce of his being to advance the cause of civil rights for all Americans. I'm devastated for his family, friends, staff—and all those whose lives he touched.

My friend, thank you for showing the world what #GoodTrouble looks like. pic.twitter.com/cvG8nSJCW5

US Senator Elizabeth Warren wrote on Twitter, "John Lewis was a true American hero and the moral compass of our nation. May his courage and conviction live on in all of us as we continue to make good trouble for justice and opportunity."