US deputy climate envoy Jonathan Pershing wants to see Australia be more aggressive in reducing emissions ahead of UN talks at Glasgow. 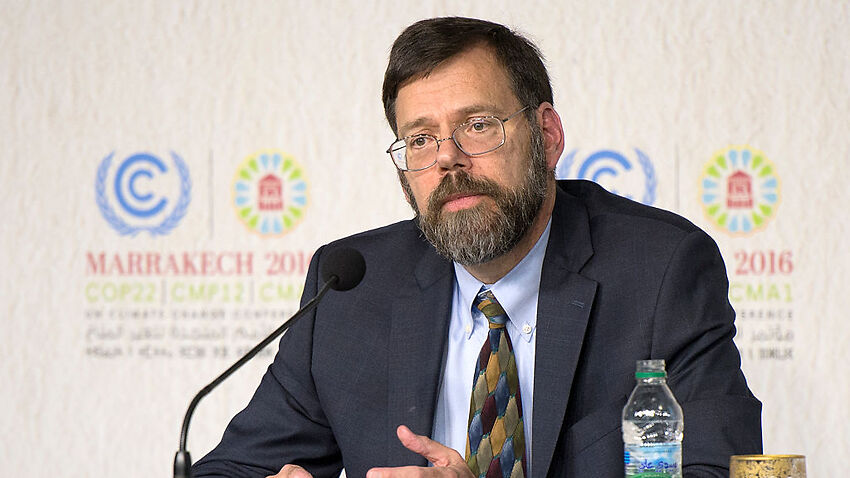 Jonathan Pershing during a conference at the UN World Climate Change Conference in Marrakesh, on November 14, 2016. Source: AFP

The United States' deputy climate chief wants Australia to commit to greater emissions cuts or explain to the world why it won't.

Addressing a climate forum, Jonathan Pershing has warned having virtually half the global economy sit out aggressive emissions cuts is intolerable.

"It would be really helpful to see Australia step forward with a more ambitious effort," he told the Better Futures Forum on Thursday.

Australia's emissions made up about one per cent of the global total, the US deputy climate envoy said.

But at one per cent, it was nearly among the top 20 in terms of global emitters.

"If a country, a wealthy country like Australia is unable to move forward, it's very hard for poor nations to think how they might do it," Mr Pershing said.

"It would be really helpful to see Australia step forward with a more ambitious effort."

"Collectively, if Australia is not, it's going to have to explain why not," Mr Pershing said.

"What things will it manage to do that will be more aggressive, how does it speak to others who are doing more, and others who have less capacity and will do less?"

He noted Australia had extraordinary resources to be more aggressive in this arena and the commitments made by state governments.

While Australia was a world leader when it came to rooftop solar, Mr Pershing flagged concerns about coal exports.

"China's moving aggressively to a deep decarbonisation plan, not as fast as I would like, but it's still moving down that road," he said.

"Australia wants to sell into that economy; it'll have to sell something different."

Ahead of the federal election, Labor flags it's moving towards a more ambitious emissions target and describes net zero by 2050 as insufficient.

"It should be informed by the climate science, and by the economics of what we need to do now to achieve net zero by 2050," he says in a speech being delivered on Thursday.

"While a commitment to net zero by 2050 is necessary, Labor understands it is not sufficient."

The latest Intergovernmental Panel on Climate Change report shows the world is on track to reach 1.5C of warming early next decade.

Mr Pershing said about 55 per cent of the global GDP had made commitments equivalent to keeping warming to about that level.

"The world can't tolerate virtually half of the global economy not participating in the aggressive emissions trajectory," he said.

"If we're lucky, we'll hold things down to 1.5 degrees of warming, which means today's disasters are what we can look forward to if we do a really good job.

"But those are doubled or tripled or quadrupled in the future that we are projecting with unfettered growth in emissions."

Australia is poised to update its 2030 emissions projections at Glasgow.

There is fierce resistance from some in the coalition, particularly within the Nationals, to signing up to net zero by 2050.