US Defense Secretary Mark Esper says he does not support sending in troops to quell widespread protests over George Floyd's death in police custody, as crowd's defy curfews.

US protesters have ignored curfews as they vent anger over the death of an unarmed African-American man at the hands of police, but street violence appears to have subsided.

Meanwhile, US President Donald Trump's defence secretary says he is opposed to sending in troops, after the president threatened to call in the military to crack down on demonstrators.

George Floyd died after a white policeman knelt on his neck for nearly nine minutes in Minneapolis on May 25, reigniting the explosive issue of police brutality against African Americans. Tens of thousands of people took to the streets of US cities coast to coast for an eighth night in protest over Mr Floyd's death and brutality against other black Americans.

Authorities took the unusual step of ordering curfews, and bands of police in riot gear and other heavily armed officers patrolled, ringing landmarks and shouting at protesters while helicopters roared overhead.

While most protests have been peaceful, there appeared to be less looting and vandalism, and clashes between police and protesters were more sporadic.

Defense Secretary Mark Esper said he did not back deploying troops to patrol the country.

"The option to use active duty forces in a law enforcement role should only be used as a matter of last resort and only in the most urgent and dire of situations. We are not in one of those situations now," he told a news briefing on Wednesday.

Mr Trump had threatened to use the military to battle violence and had derided local authorities, including state governors, for a response he said failed to dominate the disturbances.

In New York, which last ordered a curfew 75 years earlier during World War II, Mayor Bill de Blasio said an 8pm curfew would be in place until Monday.

Clashes between protesters and police and looting of some stores in New York gave way to relative quiet in the early hours. 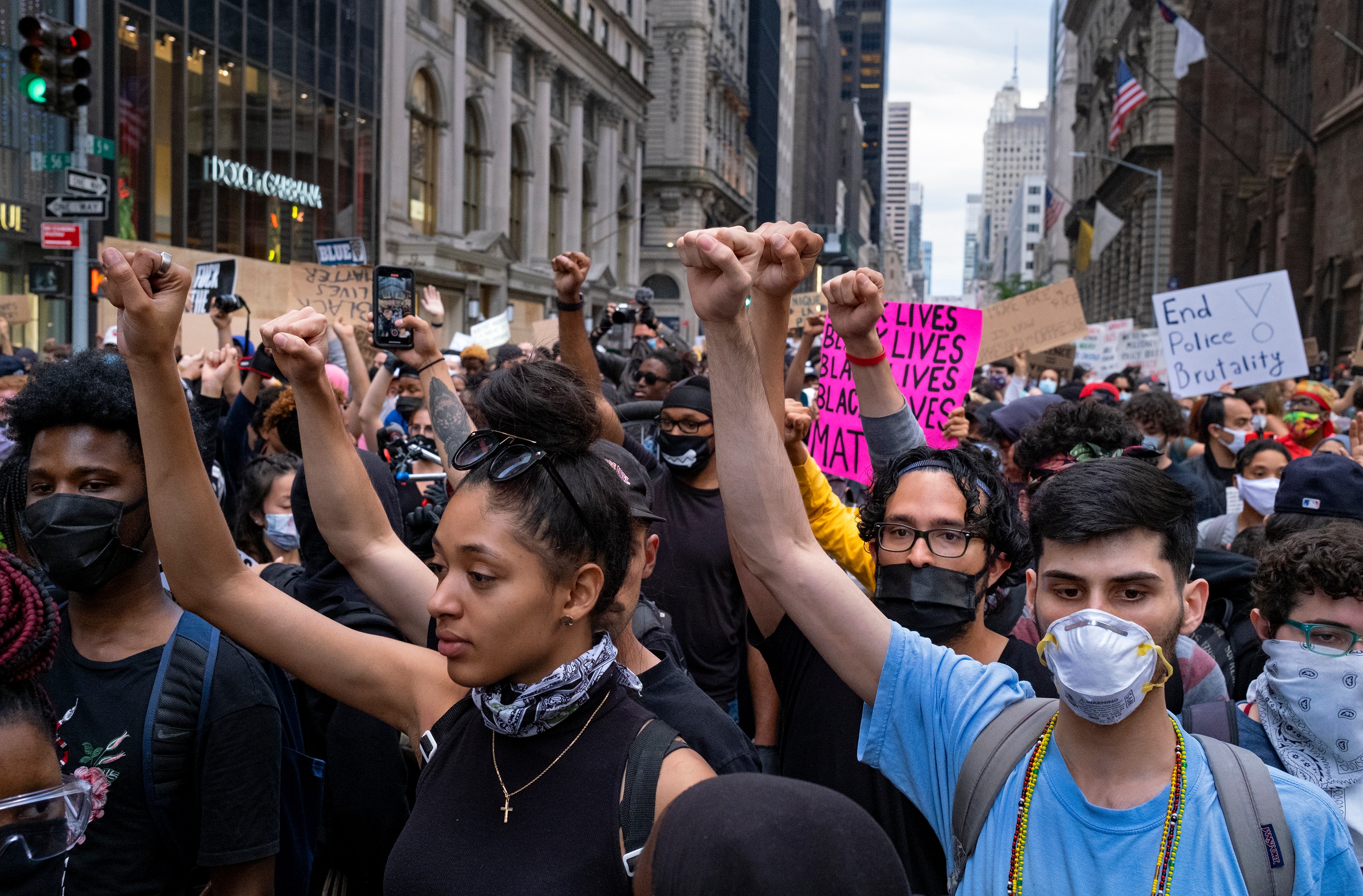 In Los Angeles, many demonstrators who defied a curfew were arrested, but calm was restored by mid-evening to the extent that television switched back to regular programming.

Large marches and rallies also took place in Philadelphia, Atlanta, Denver and Seattle, and smaller ones in many other communities.

Massive crowds have gathered internationally, from Paris to Nairobi.

In London, tens of thousands chanted "no justice, no peace, no racist police" and "Black lives matter" in a march on Wednesday.

Police officer Derek Chauvin, 44, has been fired and charged with third-degree murder and second-degree manslaughter.

Three other officers involved in the incident have been fired but not charged.

On Wednesday, Donald Trump defended his Monday night walk to pose with a Bible in front of a church, after protesters had been cleared from the White House.

"Most religious leaders loved it. It's only the other side that didn't like it, you know, the opposing, the opposition party," Mr Trump told Fox News.