The US government once considered poisoning Julian Assange, while informants to the US disappeared after WikiLeaks outed them, a London court has heard.

The US government considered poisoning Julian Assange after WikiLeaks published the names of hundreds of their informants, some of whom disappeared, a court has heard.

The first day of the WikiLeaks founder's extradition hearing in a London court heard a series of revelations by lawyers for the US government and Assange's legal team.

Mr Assange, 48, is facing 17 charges of violating the US Espionage Act and one of conspiring to commit computer intrusion over leaking and publishing thousands of classified US diplomatic and military files in 2010.

Barrister Edward Fitzgerald, for Mr Assange, told the packed court a witness will confirm the US had contemplated more "extreme measures" against the Australian.

"Such as kidnapping or poisoning Julian Assange in the embassy," he said at Woolwich Crown Court, referring to Mr Assange's seven-year asylum in the Ecuadorian embassy in London.

James Lewis QC, for the prosecution, said some US informants disappeared after WikiLeaks published their real names.

"The US is aware of sources, whose redacted names and other identifying information was contained in classified documents published by WikiLeaks, who subsequently disappeared, although the US can't prove at this point that their disappearance was the result of being outed by WikiLeaks," Mr Lewis said.

He said Mr Assange was also charged with conspiracy to commit computer intrusion for helping former US Army intelligence analyst Chelsea Manning, hack a password hash so he could hide his identity while accessing and downloading classified files. Londoners rally for Julian Assange ahead of extradition hearing

Mr Lewis said the extradition hearing wasn't a trial and all Judge Vanessa Baraitser had to decide was whether Mr Assange's alleged offences were crimes under UK laws.

"Reporting or journalism is not an excuse for criminal activities or a licence to break ordinary criminal laws," he said.

But Mr Assange's defence argued he was being pursued for "ulterior political motives".

"Again this is not about criminal justice. It is about the manipulation of the system to ensure the US government was able to make an example of Julian Assange," he said.

"It's very unlikely" that Julian Assange will give evidence in these proceedings, according to his lawyer. @SBSNews

"President Trump denies everything and we say 'well, he would, wouldn't he'," Mr Fitzgerald said.

Mr Fitzgerald argued if Mr Assange were extradited he would face discrimination because of his foreign nationality, which denied him free speech protections under the US First Amendment.

He warned it would be unjust given his long battle with depression and high risk of suicide. 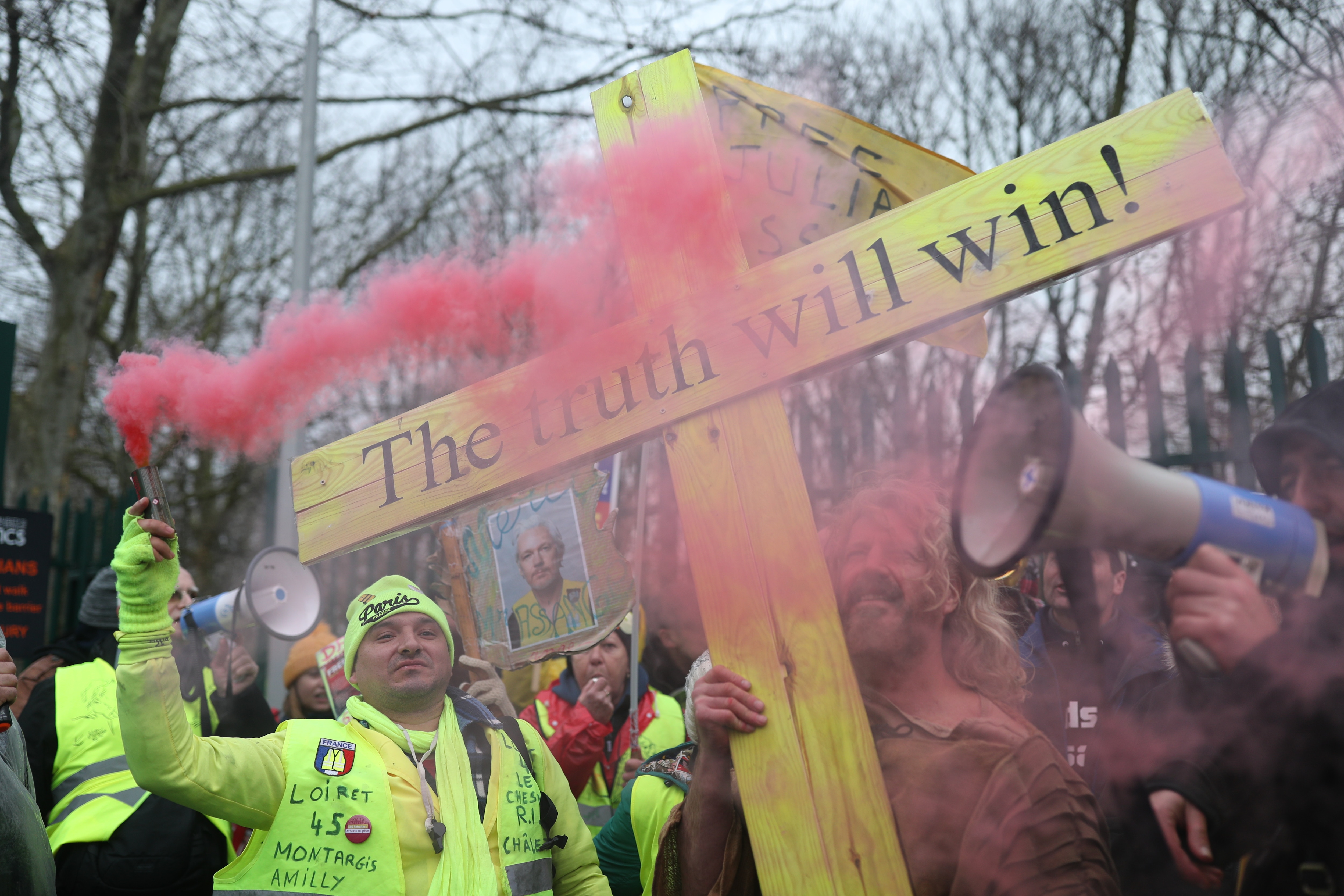 Demonstrators outside Belmarsh Magistrates' Court in London, where the extradition hearing of Julian Assange is due to take place.
AAP

Mr Assange, who looked relaxed in the dock and wore a grey suit and grey sweater with a white shirt, is unlikely to give evidence, his lawyers said.

But the Australian unexpectedly stood as the judge was about to rise for the lunch break, saying the sound of protesters outside the court was distracting.

"I cannot concentrate and the noise outside is not helpful, even though I appreciate the public support - they must be disgusted with the proceedings," he said.

The charges against Mr Assange carry a total sentence of 175 years imprisonment in the US.