Police fired tear gas and rubber bullets to disperse peaceful demonstrators near the White House on Monday as US President Donald Trump vowed a massive show of force to end violent protests over the death of a black man in police custody.

Protesters angry at the death of George Floyd and wider police brutality have held their ground in major US cities for a seventh consecutive evening as President Donald Trump vowed to mobilise the military against their demonstrations.

In Washington DC, where Mr Trump made the military pledge, protesters remained out well past the 7pm curfew.

Videos showed military helicopters flying low to the ground over a crowded intersection in what appeared to be a bid to disperse the protesters.

DC protesters posting to social media said law enforcement officers had boxed them in on residential streets and had begun arresting people for breaking the city's curfew before they could leave.

COPS IN DC ARE NOT LETTING PEACEFUL PROTESTORS LEAVE. This is love from a friend! Please RT, they have them trapped in a circle and won’t let them go! pic.twitter.com/xvKGR2dtO1

In New York, where the city set an 11pm curfew, protesters stopped traffic on main roads as they marched peacefully, while others marched in between cars on the iconic Brooklyn Bridge.

About 1,000 stopped outside the New York Police Department precinct, taking a knee in protest of police brutality against people of colour.

Earlier, Mr Trump said he would deploy thousands of "heavily armed" soldiers and police to prevent further protests in Washington.

"I am your president of law and order and an ally of all peaceful protesters, but in recent days our nation has been gripped by professional anarchists, violent mobs, arsonists, looters, criminals, rioters, Antifa and others," Mr Trump said during a nationwide address as tear gas went off and crowds protested in the streets nearby. 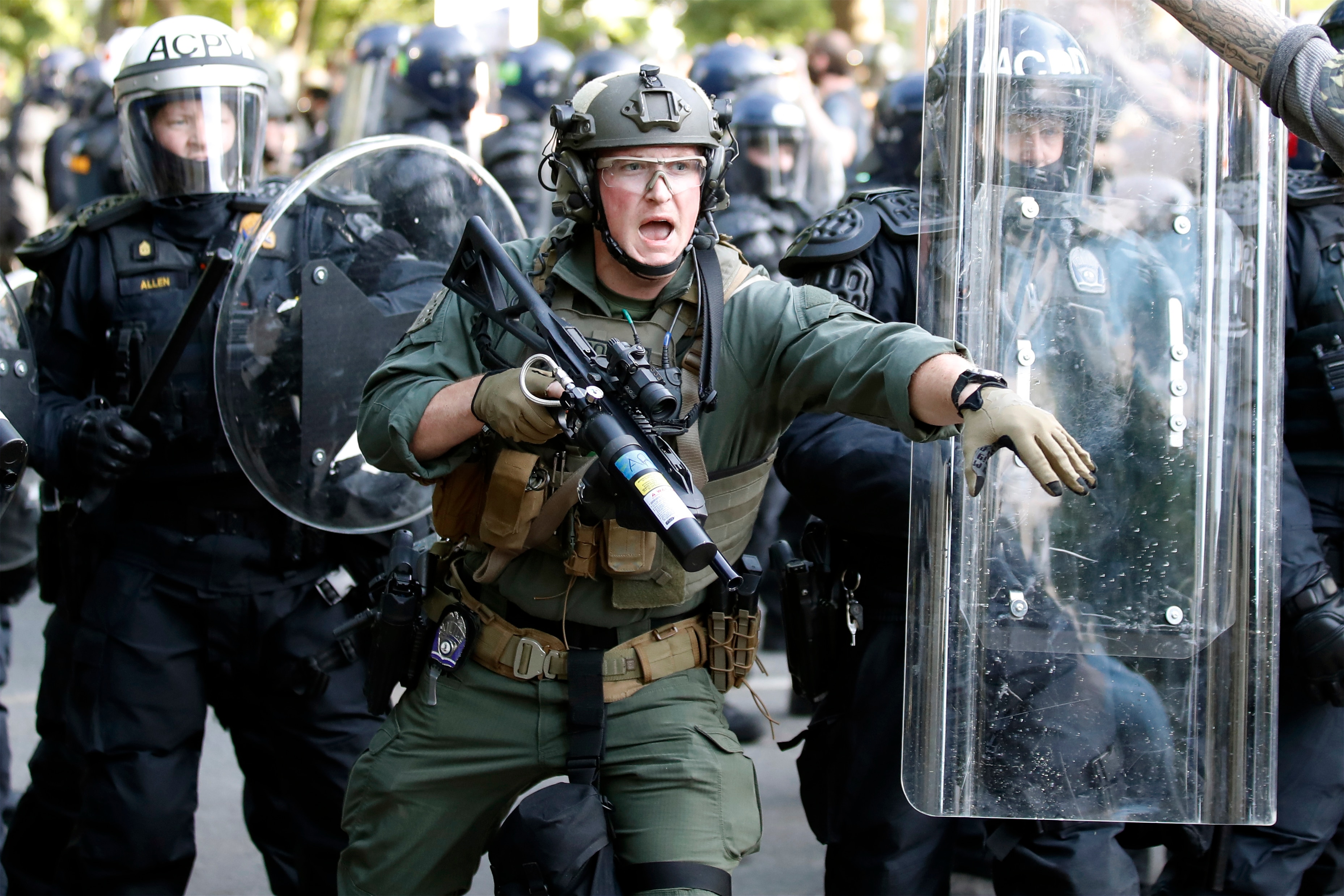 Police begin to clear demonstrators gather as they protest the death of George Floyd near the White House.
AP

"I am mobilising all available federal resources, civilian and military, to stop the rioting, looting, to end the destruction and arson and to protect the rights of law-abiding Americans."

Moments before the President delivered his address, police in Washington DC began firing tear gas and rubber bullets at a peaceful protest in what appeared to be a bid to push demonstrators away from the White House.

#WashingtonDC protestors chant “HANDS UP, DONT SHOOT” while police officers fire flash bangs into the crowd at 6:30 PM, thirty minutes prior to the 7:00 PM curfew. Are you paying attention yet? #GeorgeFloyd #Anonymous pic.twitter.com/NWg0ZflW92

In his address, Mr Trump referred to the now week-long protests as "acts of domestic terror".

"As we speak, I am dispatching thousands and thousands of heavily-armed soldiers, military personnel, and law enforcement officers to stop the rioting, looting, vandalism, assaults, and the wanton destruction of property," Mr Trump said.

"I want the organisers of this terror to be on notice that you will face severe criminal penalties and lengthy sentences in jail."

Jaw dropping. This is the sight in Washington, DC in front of the Musuem of African American History. #DCProtests #GeorgeFloydProtests pic.twitter.com/jIbU0opU7P

Mr Trump said he was "fully committed" to delivering justice to the Floyd family.

"He will not have died in vain, but we cannot allow the righteous cries of peaceful protesters to be drowned out by an angry mob," he said.

"America needs creation, not destruction. Cooperation, not contempt. Security, not anarchy. Healing, not hatred. Justice, not chaos. This is our mission and we will succeed - 100 per cent, we will succeed. Our country always wins."

Trump heading to St John’s church. Asked about clearing out a park for a photo op. pic.twitter.com/4icg7olFPf

Immediately after his address, Mr Trump and his staff walked to a nearby boarded-up church where protesters had been cleared out by the authorities just moments earlier for a photo opportunity.

"We have the greatest country in the world, we're going to keep it nice and safe," he said while holding up a bible. US President Donald Trump holds up a Bible outside of St John's Episcopal Church.
AFP

Former vice president and presumptive Democrat presidential nominee Joe Biden accused the president of turning the peaceful Washington DC protest violent so he could visit the church for a photograph.

"He's using the American military against the American people. He tear-gassed peaceful protesters and fired rubber bullets. For a photo," he tweeted.

"For our children, for the very soul of our country, we must defeat him. But I mean it when I say this: we can only do it together." 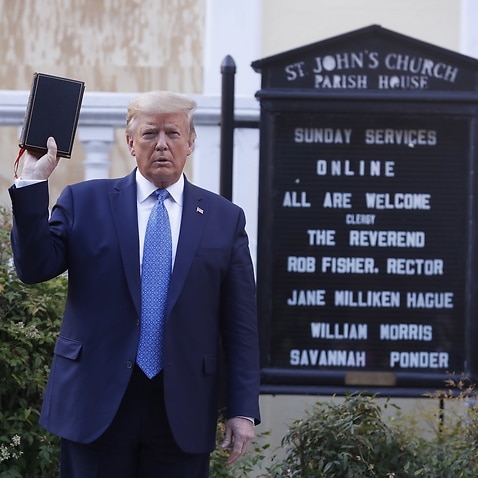 The announcement was met with immediate criticism from Democrat governors, whom Mr Trump had told just hours before to "dominate" the protesters or risk looking "like a bunch of jerks".

"The president is calling out the American military against American citizens," he tweeted.

"He used the military to push out a peaceful protest so he could have a photo op at a church. It's all just a reality TV show for this president."

The moment Police deployed tear gas amid peaceful protests in Washington, D.C so Trump can have a photo op with a Bible pic.twitter.com/6rTGCE8mvD

Within ten minutes, all of the protesters in front of the White House were moved before the president began speaking in the Rose Garden. You can still hear flash bangs going off. pic.twitter.com/n0ZrDlP8Mj

"He can't do it. We wont request military assistance here in the state of Illinois. I can't imagine any governor is going to do that - it's ridiculous," he told CNN.

"I think he just wants to create a tone in which it's law and order versus people standing up for their rights, and he'd just as soon run over people's rights."

A beautiful moment from tonight’s protest in Anaheim. 600 people- no rioting, no looting, no violence. Just silence in honor of lives lost to police brutality. Very proud and fortunate to be apart of something so peaceful. #BlackLivesMatter pic.twitter.com/OLpFaYb21h

The unrest has been the most widespread in the United States since 1968, when cities went up in flames over the slaying of civil rights icon Martin Luther King Jr., and rekindled memories of 1992 riots in Los Angeles after police were acquitted in the brutal beating of black motorist Rodney King.