Jacob Cartwright was driving a truckload of potato chips but the tractor-trailer got stuck after he took the wrong turn.

A truckie who was missing for four days in a snow-covered part of Oregon after his GPS mapping device sent him up an impassable road has emerged safely from the remote and rugged region.

Jacob Cartwright, 22, showed up on Saturday near the town of La Grande, where an intensive search involving aircraft had been taking place since he went missing on Tuesday.

Mr Cartwright's boss, Roy Henry of Little Trees Transportation, said Mr Cartwright was driving a truckload of potato chips but the tractor-trailer got stuck after he took the wrong turn in an area with limited mobile phone coverage.

According to local TV station KTVB, Mr Henry said the truckie's woes began when he entered the wrong address into his GPS. Later, when he realised his mistake and entered the correct one, he was directed by his device to take a forest service road that eventually became impassable.

"He made the proper effort to correct his mistake," Mr Henry told the station. "From that point on, it was out of his control. He had no reason to believe the GPS was wrong."

According to the Oregon State Police, Mr Cartwright's vehicle spun out and slid along a steep embankment along the shoulder of the forest service road.

"This area is a remote and mountainous location that has very limited, if any, cellular service," they said in a statement.

The trucker started walking away from the direction he had come from without any food or water just after midnight on Wednesday. Police said he travelled in excess of 14 miles, or around 22 kilometres, through the very difficult terrain. 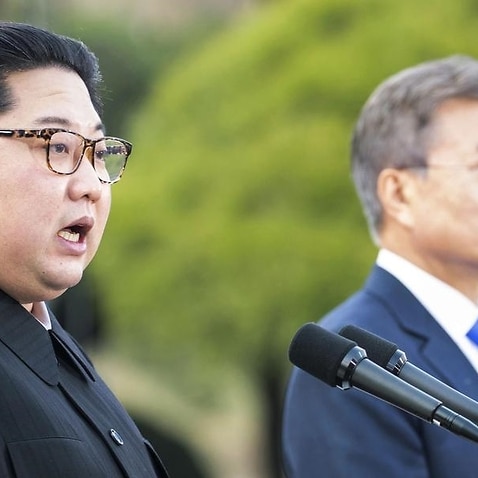 North Korea offers to shut nuclear test site in May, invite US experts

"This route of travel from his vehicle was at elevations from approximately 5000 feet to 6500 feet (or 1500 metres to 2000 metres) as he crossed snowy mountain peaks and back down to Interstate 84."

He didn't stop until Saturday morning when he neared La Grande, where he lives, Mr Henry said. From there, the trucker got a ride from a passing driver to his home.

Mr Cartwright's wife returned home from meeting with local officials about the search for her husband only to find him in their house.

Mr Henry asked Mr Cartwright why he didn't take some potato chips with him for his journey.

"That's the load I was hauling and I didn't want to damage the property," the truckie responded.