Victorians aged 60 and over are now able to get the Pfizer and Moderna COVID-19 vaccines through state-run hubs. 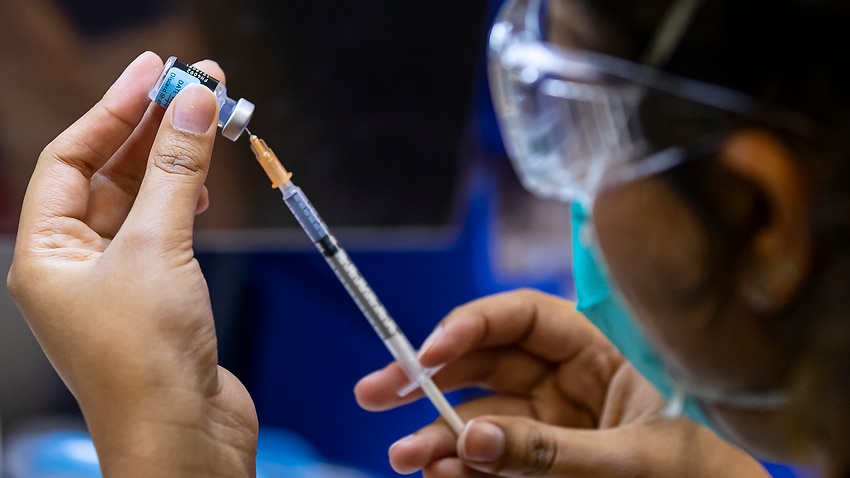 A health care worker prepares a Pfizer vaccine in the pharmacy of the Heidelberg Repatriation Hospital vaccination hub in Melbourne, Monday. Source: AAP

Victoria has recorded 1,612 new coronavirus cases and eight new deaths, as access to Pfizer and Moderna vaccines is expanded.

Monday's case figure is a drop on Sunday's tally of 1,872 infections, with the total number of cases recorded in the state since the pandemic began now at 19,012.

Of the eight deaths reported in the 24 hours to midnight on Sunday, the youngest was a man in his 40s from the Port Phillip local government area.

Some 677 people are in hospital with COVID-19, with 133 receiving intensive care and 94 on ventilators.

With supplies of mRNA vaccines from the Commonwealth “increasingly assured,” and with high takeup of the vaccine among young Victorians, Health Minister Martin Foley announced over 60s would now be able to access the Pfizer and Moderna vaccines through state hubs.

“This change, which is now in effect, has been made possible by the relative certainty we now have for Moderna and Pfizer and the extraordinary number of young people who have come forward over the past three and a half weeks,” Mr Foley told reporters in Melbourne.

“Victoria is well on the way to becoming one of the world's most vaccinated jurisdictions.”

Mr Foley said vaccination centres will also make walk-ins a permanent part of the program, as the start looks to close in on the 70 and 80 per cent double dose milestones. Reaching those targets will trigger an easing of restrictions for the fully vaccinated.

The state government also launched a new vaccination campaign ahead of the reopening period through summer.

Residents are being reminded that getting vaccinated is their ticket to enjoying life after lockdown, including dining out, live sport, travel and reconnecting with family.

“If you are not vaccinated, these freedoms won't apply to you the same way that they will to those Victorians that are vaccinated,” Mr Foley warned.

He refused to be drawn on when unvaccinated Victorians would be allowed to access the vaccinated economy.

Victorian Deputy Secretary for the COVID-19 Health Response, Naomi Bromley, said 22 per cent of Monday’s new cases were recorded in patients over the age of 50.

“That has been slowly increasing in recent days, this is concerning because we know COVID can have a devastating impact for older Victorians,” she said.

Fifty-eight per cent of yesterday’s hospitalisations were aged over 50.

Some 459 cases, 29 per cent of the daily tally, were recorded in Melbourne's southeast, with the City of Casey recording 174 infections - the highest of any local government area.

“We have been expressing concern about the southeastern suburbs for a few weeks now, we have been upgrading vaccination capacity in the areas,” Ms Bromley said.

What happened to other countries that opened up after COVID-19 vaccine targets?

Some 499 new cases were recorded in the city’s north, but health officials say they are seeing a stabilisation in areas like Hume, which reported 199 infections.

“The dramatic increase in vaccination rates in the area has gone a long way to helping us bend the curve of the infection in this area,” Ms Bromley explained.

In regional Victoria, 122 new cases were reported, with 60 cases in Latrobe, and 36 new infections in Mildura.

The town in Victoria's northwest, which is now under lockdown, has a total of 290 active cases.

On Sunday, 16,000 tests were conducted in Mildura with close to 80 per cent of the town’s population having been tested over the past two days.

From Monday, 15 regional venues will take part in a trial that will see businesses trial the checking of double vaccinations.

The system will be scaled up so double-vaccinated Victorians can attend the Melbourne Cup and live music within weeks, under plans to open up the economy when the state hits an 80 per cent double dose vaccination target for eligible people, expected around 5 November.

About 10,000 racing fans will be able to attend the Melbourne Cup on 2 November, while Oaks Day and Stakes Day will be allowed similar-sized crowds if the state reaches its 80 per cent double dose threshold.

Martin Foley defended the decision to stage the race ahead of a sizeable crowd, potentially before schools are allowed to welcome back students.

“Ten-thousand Victorians as a part of the trial of the vaccinated economy program, [they] will be there to see the race that stops a nation and in this instance, starts Victoria's recovery,” he told reporters.

“It's about one 10th of the total capacity of that facility. So, let's all keep it in perspective here, this is a safe, sustainable, reopening that makes sure that our important events, our big iconic events, can go forward, and demonstrate to the world that we can safely and cautiously re-open.”

He also confirmed discussions are ongoing with the New South Wales premier about a potential relaxation of interstate border restrictions.