It comes as it's confirmed a week-long lockdown of Victoria's Latrobe Valley will end on time at 11.59pm on Tuesday. 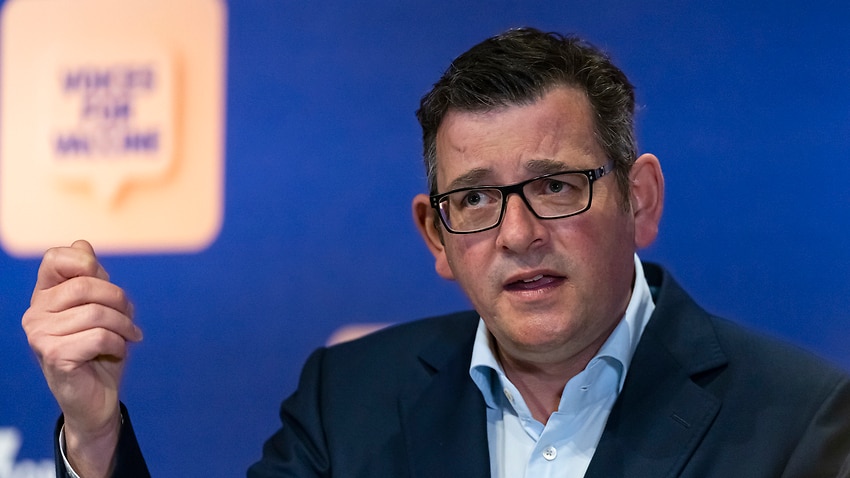 Victoria is "on track" to ease restrictions as planned despite recording the nation's highest daily number of new COVID-19 infections.

The state on Tuesday reported 1,763 new local cases of COVID-19, the highest daily tally of any Australian state or territory since the coronavirus pandemic began.

The previous national record of 1,603 daily cases was set by NSW just over four weeks ago when its outbreak peaked.

It is the sixth day in a row 1,000-plus cases have been reported in Victoria, pushing up the number of active infections in the state to 14,368.

But Premier Daniel Andrews says he is committed to ending lockdown when 70 per cent of Victorians aged above 16 are fully vaccinated against the virus. Further restrictions are set to ease at the 80 per cent mark.

About 83 per cent of Victorians have received their first jab, while almost 54 per cent are double-vaccinated. The government expects the 70 per cent double-dose target will be met about 26 October and 80 per cent about 5 November.

"We are on track to meet the targets. We may be ahead of schedule but I don't want any sense of complacency to creep in," Mr Andrews told reporters.

"At this stage, I've got no advice that we have to alter anything on the roadmap. I want to try to give people as much freedom as fast as I can, as safe as possible."

There are 517 Victorians in hospital battling the virus, up 19 from Monday, with 101 people in ICU and 66 requiring a ventilator.

More than 62,000 Victorians were tested for the virus in the 24 hours to Tuesday morning, while 35,253 vaccinations were administered at state-run sites.

All on-site workers must now have at least their first dose of a COVID-19 vaccine and be fully vaccinated by 13 November.

A COVID marshal will be placed at every worksite across the state and workforce caps remain, except for outdoor state government projects.

The industry-wide vaccine mandate, and other restrictions brought in to curb transmission, sparked a protest outside the CFMEU's Melbourne headquarters on 20 September, the day the state government announced the sector would down tools.

Mr Andrews also announced the City of Latrobe, which encompasses the Gippsland towns of Traralgon, Morwell and Moe, would come out of lockdown from 11.59pm on Tuesday.

The region was plunged into a seven-day lockdown last week after an AFL grand final weekend party led to widespread transmission.

Meanwhile, federal Treasurer Josh Frydenberg is in isolation after a member of his staff tested positive to COVID-19.

In a statement, he said while he has been tested for COVID-19 and returned a negative result, he will out of caution isolate until further notice.

Mr Frydenberg's electorate office in Melbourne has been closed and will undergo deep cleaning.

The treasurer said he was informed of the positive test result of his staff member on Monday night.

"At present the staff member is yet to be contacted by Victorian Health and Human Services contact tracers, which would start the process to determine if my electorate office would be deemed an exposure site," he said.

"Staff members who had been in contact with the COVID-19 positive staff member are being tested and are isolating."