Chief Commissioner Shane Patton said it was extremely concerning to see so many people flouting public health directions in the middle of a lockdown.

Victoria Police have fined 60 people for coronavirus breaches in the past 24 hours, including 16 who were traced back to a birthday party after an early morning dash to KFC.

Chief Commissioner Shane Patton said it was extremely concerning to see so many people flouting public health directions in the middle of a lockdown.

Victoria on Friday confirmed a record 288 new coronavirus cases overnight in the biggest single-day increase in Australia since the pandemic began. 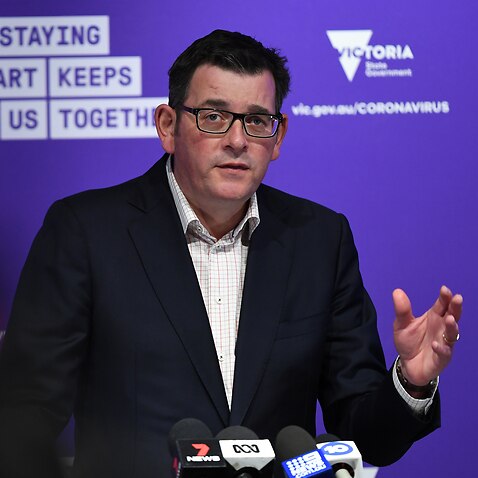 "We had [ambulance officers] who were at a KFC in Dandenong, and while they were getting something to eat, they saw two people who were ordering 20 meals at 1.30 this morning," he told reporters.

"We got the registration number of the car and we followed it to an address in Dandenong. When we went in, there were two people asleep but there were 16 others hiding out the back."

The partygoers tried to avoid police by hiding under beds and in the garage, Mr Patton said.

"Police issued 16 fines for this deliberate, blatant and obvious breach of the chief health officer's directions."

If you believe someone may be breaching the Chief Health Officer’s directions, please make a report to the Police Assistance Line by calling 📞131 444.

"Police attended and found four people inside the address who did not reside there," police said in a statement.

"Further enquiries revealed the apartment was being used to facilitate sex work in breach of the stay-at-home directions."

A Docklands couple was fined after trying to get to their Phillip Island holiday home at 1.30am.

"They were turned away at one checkpoint and given a warning, and then attempted to re-route before being stopped at a second vehicle checkpoint," police said in a statement.

"The driver was issued with a fine, and we are planning to fine the passenger as well."

Premier Daniel Andrews said the Melbourne lockdown could be extended beyond six weeks if people continued to flout directions.

"I would appeal to every single Victorian. The only way for us to bring stability to these numbers is for all of us to stay at home."