Victoria has recorded 1,965 new locally acquired COVID-19 cases along with five deaths as its outbreak continues to escalate. 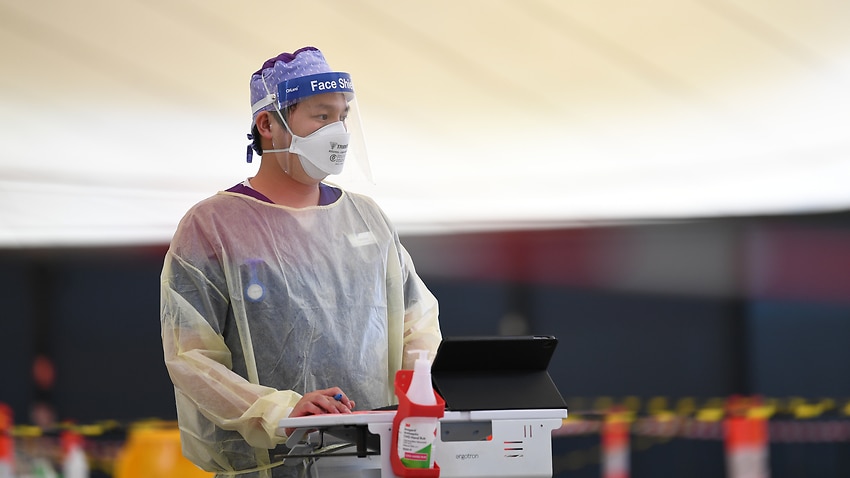 The regional border town was sent into a seven-day lockdown from midnight on Friday. There were 20 new infections recorded in the past 24 hours to Saturday, taking the outbreak to 37 active cases.

"We are particularly concerned about Mildura because of this rate in case growth and we believe there may be additional cases out there yet that we have not found," Deputy Health Secretary Kate Matson told reporters.

Mildura will be under the same stay-at-home rules as Melbourne, excluding the curfew, with a 15-kilometre travel limit and a ban on visitors at people's homes.

Ms Matson acknowledged the decision to enter lockdown was made "quite late into the evening" on Friday.

"But as always, we are making these decisions on the latest advice and the latest data at the time and if there was any inconvenience caused by our late notice, we do apologise for that," she said.

"But we will never apologise for taking the right public health actions to protect Victoria and Victoria's community, and in this instance, the community in the Mildura area."

There are currently 578 people in hospital with the virus, with 117 in intensive care, 83 who require ventilation.

Minister for Government Services Danny Pearson said 85 per cent of the over-16 population have now received their first dose of the COVID-19 vaccine.

"And 57 per cent have received a second dose which is a fantastic effort," he said.

In Melbourne, 735 COVID-19 cases were recorded in the northern suburbs, in particular in the local government areas of Hume and Whittlesea.

In the city's west, there were 464 new cases, many of those in the Melton area. There were 533 new infections recorded in the south-east.

Routine testing by Virgin Australia has also identified a positive case in a cabin crew member who flew on at least six domestic flights while potentially infectious.

The flights between Melbourne, Adelaide, Sydney and Newcastle on 4 to 6 October have been listed as close contact sites and passengers will be notified.

Thousands to be released from quarantine

Meanwhile, people considered secondary contacts of a COVID-19 case are no longer required to isolate in Victoria as the state moves towards living with the virus.

Text messages were sent on Saturday to 16,000 people advising them of the changes and effectively releasing them from quarantine.

Primary contacts, who have directly engaged with a positive case, will still need to get tested and isolate for 14 days.

Secondary contacts are the associates of a 'primary contact' and will no longer be managed by public health units.

"This has been effective in Melbourne for a while, but now this will be occurring statewide," Ms Matson said.

"We are no longer chasing COVID zero in Victoria, and we have 17,000 active cases in Victoria at this point in time."

Mr Pearson also on Saturday announced an extra $15 million in funding for the the state's arts and creative industries.

"$10 million of this will target key small to medium creative organisations, much loved arts festivals, and the state's major performing arts companies," he said.

"It will ensure they can continue to operate and employ people, engage artists and plan a pathway to recovery as restrictions ease."

A further $5 million will go directly to individual artists, creative workers, collectives and micro businesses, many of who Mr Pearson said have "fallen through the gaps" of other support programs.

"This funding will be delivered through a new streamlined round of the Sustaining Creative Workers Program and it will contain grants of up to $5,000 for practitioners, including freelancers and subcontractor contractors," he said.

The grants are simular to a program run in 2020 and applications can be made on the Creative Victoria website.

Meanwhile, Greater Shepparton and Moorabool Shire exited their lockdowns at 11.59pm on Friday, with rules now matching the rest of regional Victoria including masks indoors and out, and a ban on home gatherings.