The City of Hume has been Victoria's hardest-hit municipality during the pandemic. But amid a massive vaccination blitz, the area has turned things around. 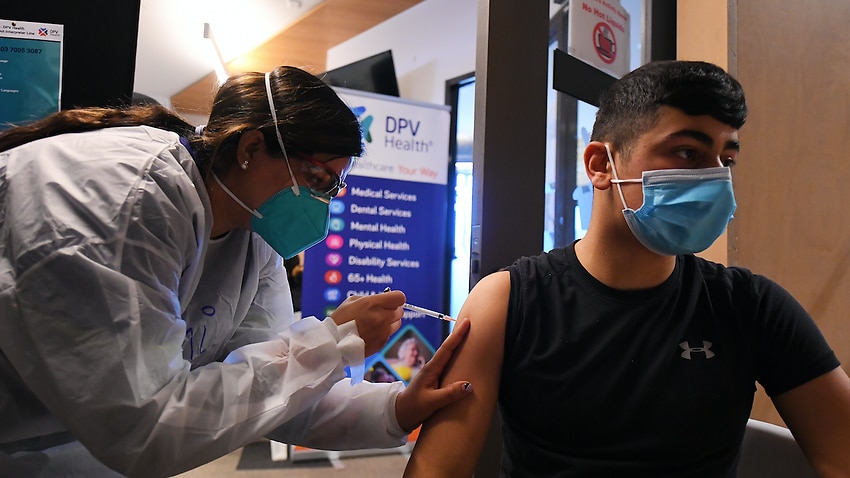 A healthcare worker administers a COVID-19 vaccine at a pop-up clinic in Broadmeadows, Melbourne Source: AAP

The City of Hume hasn't had an easy pandemic.

The local government area, located around the outer north-western suburbs of Melbourne, has been Victoria’s worst-hit municipality by COVID-19, according to state government data.

It also currently has the highest number of active COVID-19 cases in the state at around 3,200.

But the area - home to seven of the state government’s 27 ‘priority postcodes’ with first dose vaccination rates below 75 per cent at the start of this week - has seen jab uptake soar recently.

First dose rates for those aged 15 and over have gone from below 50 per cent a month ago to 80.7 per cent as of 3 October.

“The situation in Hume has been an incredibly difficult one over quite some time," City of Hume Mayor Joseph Haweil told SBS News.

"We've been deeply impacted by the pandemic … and we know the reason why - because of our community's profile. A lot of essential workers go out there to do the critical work that's required to keep this state running and therefore expose themselves to the virus.”

An “incredibly diverse community” home to nearly 250,000 people from 150 different countries, Hume also boasts “the largest intake of refugees under the humanitarian program in Victoria and second largest in Australia”, Mr Haweil said.

“So there are some unique challenges and opportunities in order to get the vaccine rollout right. Also, we're a very young community, the average age here is 33,” he said.

At the start of Victoria’s current outbreak, Mr Haweil said Hume won “the terrible trophy that no one ever wants to win, which is the least vaccinated municipality in Victoria”.

“But I'm very pleased to say that with a really intensive push, and interventions in a number of ways that we've now gone from the least vaccinated municipality in Victoria, to one with a very high rate of vaccinations, and the municipality that week-on-week for the last three weeks had the largest single increase in first dose vaccinations in the entire state,” he said.

“And that's certainly something to be very proud of.”

It comes as the Victorian government launches a vaccination campaign among people living with disabilities and residents in areas of concern in the lead-up to the state's reopening.

Many of the 'priority postcodes', such as those in the City of Hume, are home to culturally diverse communities with large populations of essential workers and young people.

“Certainly the populations that are still underrepresented in the vaccinations are from the suburbs where people are less affluent, or who have language skill issues, and generally are time poor because they have to work hard,” said Mukesh Haikerwal, a GP and former president of the Australian Medical Association.

These areas have been “at a disadvantage” as they are “underrepresented in numbers of general practices and practitioners around able to give vaccines in the first place,” he said.

Another crucial factor is that “the population is generally younger in these suburbs, and we didn't get vaccine availability to younger people until much later on in the game”, he added.

Two days after announcing its blitz in the 27 priority postcodes, on Thursday the state government pledged $5 million to speed up rates among Victorians living with a disability.

Around 71 per cent of Victoria’s National Disability Insurance Scheme participants aged over 16 had received their first dose of a vaccine as of 30 September - slightly higher than the national average of 67 per cent, but lower than Victoria's general population at 84 per cent.

"We can't open up when we've got people living with disabilities, with vulnerabilities, if they're not at a higher rate of vaccinations," he said.

While people with disability have been considered a ‘priority group’ since the start of the vaccine rollout, achieving high rates of vaccination across the cohort has “proved more complicated than the government thought”, Deakin University chair of epidemiology Catherine Bennett said.

“It's clearly the time before we contemplate opening up to make sure that we don't have any groups lagging behind, and disability has been identified as an area of concern,” she said.

“So making it easier for people, allowing them to attend without bookings, putting those pop-up sites in places where you know you have a larger disability community that's yet to be vaccinated are all really important things.

“But it's also going to be about making sure people have access to the information that allows them to make their choices and supporting that side of it as well so people are able to make an informed choice. And then if they decide to be vaccinated, they've got ready access to the vaccines.”