Large crowds have gathered in the Melbourne CBD to protest against a new vaccine mandate as well as a proposed new pandemic bill by the state government. 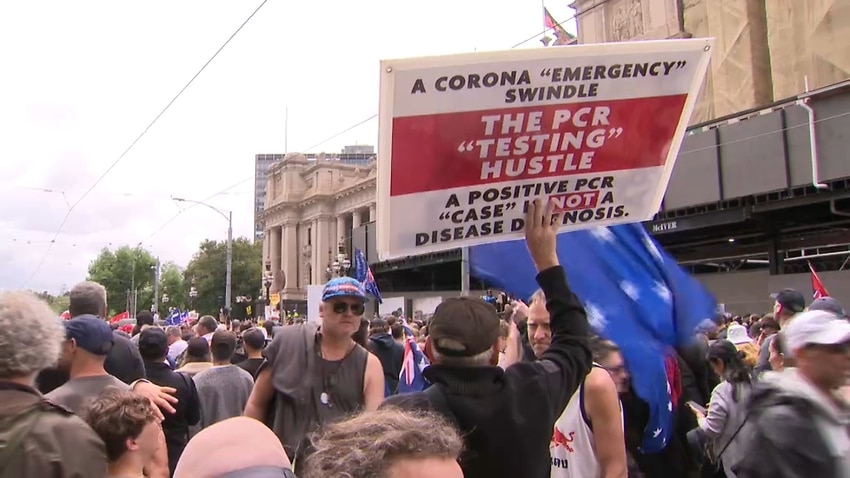 Thousands have taken to the streets in the Melbourne CBD to rally against a controversial vaccine mandate that comes into effect in Victoria today.

This is the third Saturday in a row that protesters have gathered in the CBD, with the crowds steadily growing in size.

While the protests have been largely peaceful, demonstrators were captured on video footage carrying props like a fake gallows with nooses attached to it. Other protesters carried the Australian flag and the Eureka Flag.

Read More
Australia reaches vaccination milestone, but these communities are still at risk

Victoria Police said they would continue to monitor the protests to ensure they comply with COVID-19 rules.

"Individuals have the right to lawfully protest, however we ask that people do so peacefully and respectfully without impacting on the rest of the community," a Victoria Police spokesperson said.

According to the new vaccine mandate from today, all construction workers visiting a worksite in Victoria are now required to be fully vaccinated. Residential aged care workers will also need to be fully immunised to attend the workplace on Monday.

Huge protest in Melbourne against lockdowns, mandates, vaccine passports and laws which grant the Victoria government indefinite emergency powers. These protests are happening all around the world and yet the media continue to ignore them.#NoVaccinePassports #AustraliaProtests pic.twitter.com/UDKUpK7yzZ

Holding signs such as "Stop the Bill" and "Kill the Bill", the demonstrators are also rallying against a proposed pandemic bill by the Victorian government.

The bill passed the state's lower house of parliament last month and is set to be debated in the Upper House next week.

The new legislation would allow the premier to initially declare a pandemic for four weeks and then renew that status at three-month intervals thereafter until there is no risk from the virus to the community.

Currently, the state government only has the ability to declare a state of emergency, which has to be renewed every four weeks, and can only be renewed for a maximum period of nine months.

The current state of emergency powers expire on 15 December.

"We are being governed by medical bureaucrats that are part of a mad, insane cult of vaccinists," he told the rally.

Premier Daniel Andrews has defended the Public Health and Wellbeing Bill, saying transparency measures are contained in the legislation and that it has been developed with input from public health, human rights and legal experts.

Under the proposed laws, the premier would be required to publicly release reports outlining the reasons for declaring a pandemic. The health advice from the chief health officer would also be published.

The state opposition has said they will not approve leave to debate the legislation when it comes before Parliament next week.

Liberal upper house leader David Davis called the premier's pandemic legislation a "grab for power" but urged protesters not to resort to violence.

"I would encourage Victorians to fight on every level against Daniel Andrews' terrible pandemic bill ... but they should make their views known in a peaceful and calm and sensible way," he told reporters.

Victoria is the first Australian jurisdiction to develop a specific pandemic law rather than rely on public health or emergency legislation for COVID-19 policy.

The Human Rights Law Centre, earlier this week in its analysis of the legislation, welcomed the move by the government to adopt enhanced safeguard measures.

“All states and territories need laws to help manage pandemics. This Bill improves the current law. We now have an important opportunity to make it the best it can be," said Human Rights Law Centre legal director Daniel Webb.

He called for two additional changes: a requirement to have the health minister act in accordance with the state's Human Rights Charter when making pandemic orders, and the power for people to appeal "decisions which significantly impact their rights using an independent, timely, accessible and binding procedure".

Prime Minister Scott Morrison said he would not intervene on Victoria's pandemic laws.

"This is entirely a matter for the Victorian parliament," he told told Radio 3AW on Friday.

The state recorded 1,221 new cases and four deaths on Saturday.

In Victoria, 87 per cent of the adult population are fully vaccination and 92.7 per cent have had one vaccine dose.