Victoria University has been urged to reconsider removing material about the Bosnian War from a course on human rights.

Victoria University has bowed to pressure from a pro-Serbian blogger and removed material referring to crimes against Bosnian Muslims from a course on human rights.

YouTuber Charles Cather, an American blogger based in Novi Sad, Serbia, led the campaign to remove a section of a lecturer's presentation that described the murder of Bosnian Muslims by a Serbian guard.

The material referenced by the lecturer was written by Philosopher Richard Rorty in ‘Human Rights, Rationality, and Sentimentality’ and includes a quote from US writer David Rieff who reported on the Bosnian War in Bosnia and Herzogovina between 1992 and 1995.

"To the Serbs, the Muslims are no longer human...Muslim prisoners lying on the ground in rows, awaiting interrogation, were driven over by a Serb guard in a small delivery van," Mr Reiff wrote.

Mr Cather said Mr Reiff's quote was "degrading Serbs" and encouraged his 48,000 followers to lodge a complaint with the university in a video posted on 14 May.

The following day, Mr Cather uploaded another video celebrating that the university had removed the course material and sent an email to him to apologise. 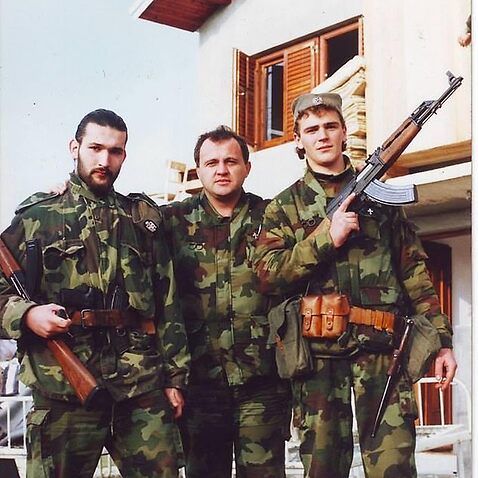 In screen grabs of the email from Victoria University shared on Mr Cather's YouTube page, the university said the course material had been reviewed and immediately removed.

“The content does not in any way reflect the opinions of Victoria University and we apologise for any hurt that it may have caused,” the email said.

Dr Emir Ramic, chairman of the Institute for Research of Genocide Canada, wrote to the university raising his concerns about the removal of the content.

“It recently came to our attention that you have removed content from one of your classes regarding war crimes and dehumanisation of Bosniaks during the genocide campaign carried out by Serb forces during the 1990s,” he wrote in the letter.

“This video organised a target mob against the university and its academia to pressure it into removing this content from classes,” he also said.

“We urge you to reconsider your decision and stand on the right side of history and justice,” he added. In response to the social media criticism for removing the content the university defended its decision.

“The decision to remove this particular quote is not a reflection on its accuracy or validity, but rather a recognition that examples need to be carefully chosen when dealing with topics as sensitive as human rights,” the university said.

“On reflection, it was determined that the quote was overly explicit and that discussion on this matter, and related human rights abuses could have been facilitated without the level of detail provided,” they said.

“Victoria University aims to provide a safe and inclusive space in the class room where controversial topics, such as this, can be explored and discussed freely by all students without fear or judgment,” they added.

“We apologise for any hurt that the use, or removal of this quote may have caused."

In response to SBS News questions regarding why the content was taken down given the complaints came from non-students, Victoria University said "concern about the use of the quote was raised by a number of sources".