Protesters have clashed with riot police as senior officials attended an annual flag-raising on the 22nd anniversary of the handover of Hong Kong to China.

The angry scenes ramped up tensions in the financial hub which has been rocked by three weeks of historic demonstrations against a hugely unpopular bill that would allow extraditions to the Chinese mainland. Protesters smash window of the Legislative Council in Hong Kong on Monday.
AAP

Tens of thousands of democracy activists staged another large, peaceful march through the city on Monday afternoon, calling for the city's pro-Beijing leader to step down and reverse what they see as years of sliding freedoms.

But that rally was overshadowed by small groups of mainly young, masked protesters who seized roads and tried to break into the legislature, sparking renewed clashes with police after two weeks of relative calm.

Under blazing summer skies the young demonstrators made multiple attempts to smash into the building, using a metal cart as a battering ram and wielding steel poles to prize open gaps in the reinforced windows. 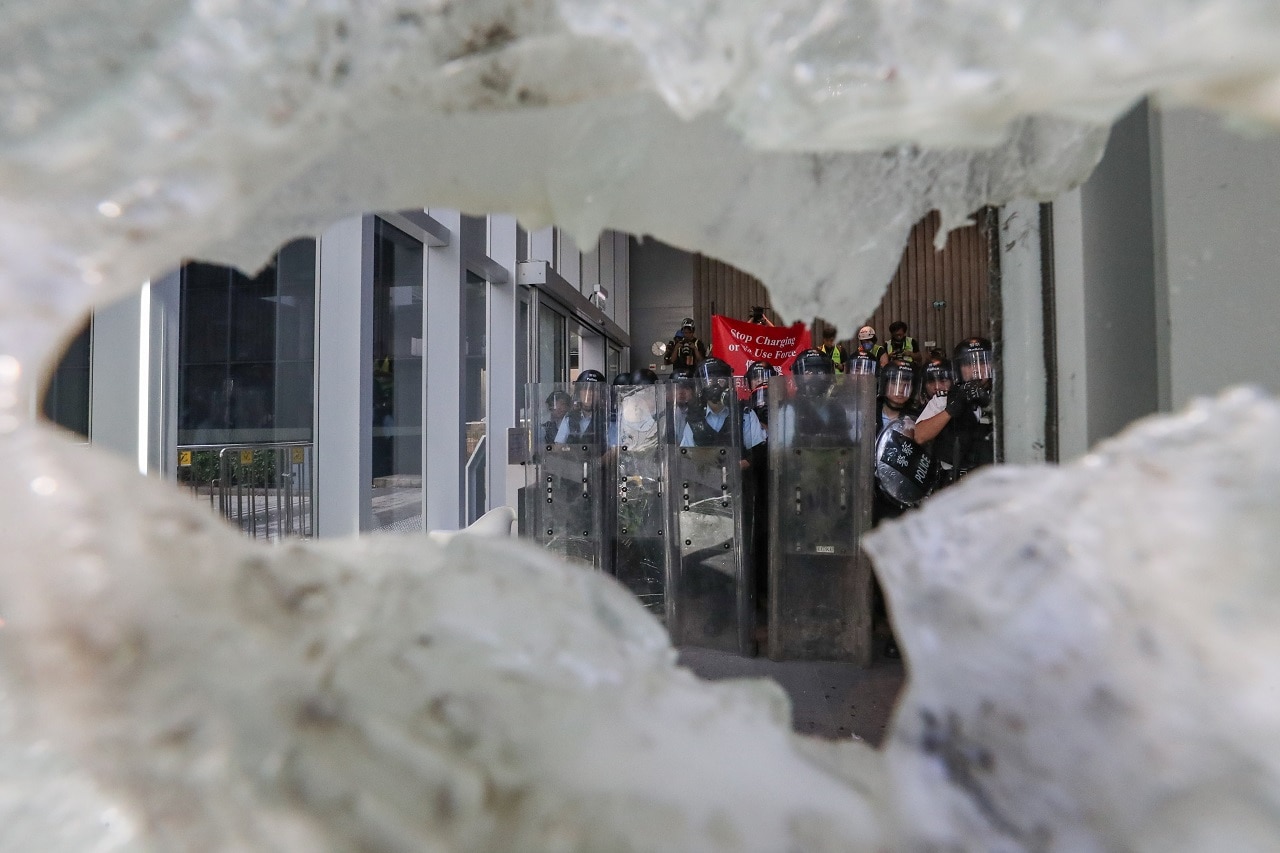 Police inside the Legislative Council.
AAP

Riot police inside the building wore gas masks as they squirted pepper spray at protesters, who unfurled umbrellas to shield themselves.

The anti-government demonstrators eventually managed to prise open a hole in the reinforced glass at the main entrance. But police retreated behind heavy metal shutters that locked down the rest of the building. "We know that this is breaking the law, but we have no choice," a 24-year-old protester surnamed Cheung told AFP.

The huge rallies over the last three weeks are the latest expression of growing fears that China is stamping down on the city's freedoms and culture with the help of the finance hub's pro-Beijing leaders.

But the increasingly hardline tactics from some protesters have alienated some, with a large counter-rally in support of the police taking place on Sunday. 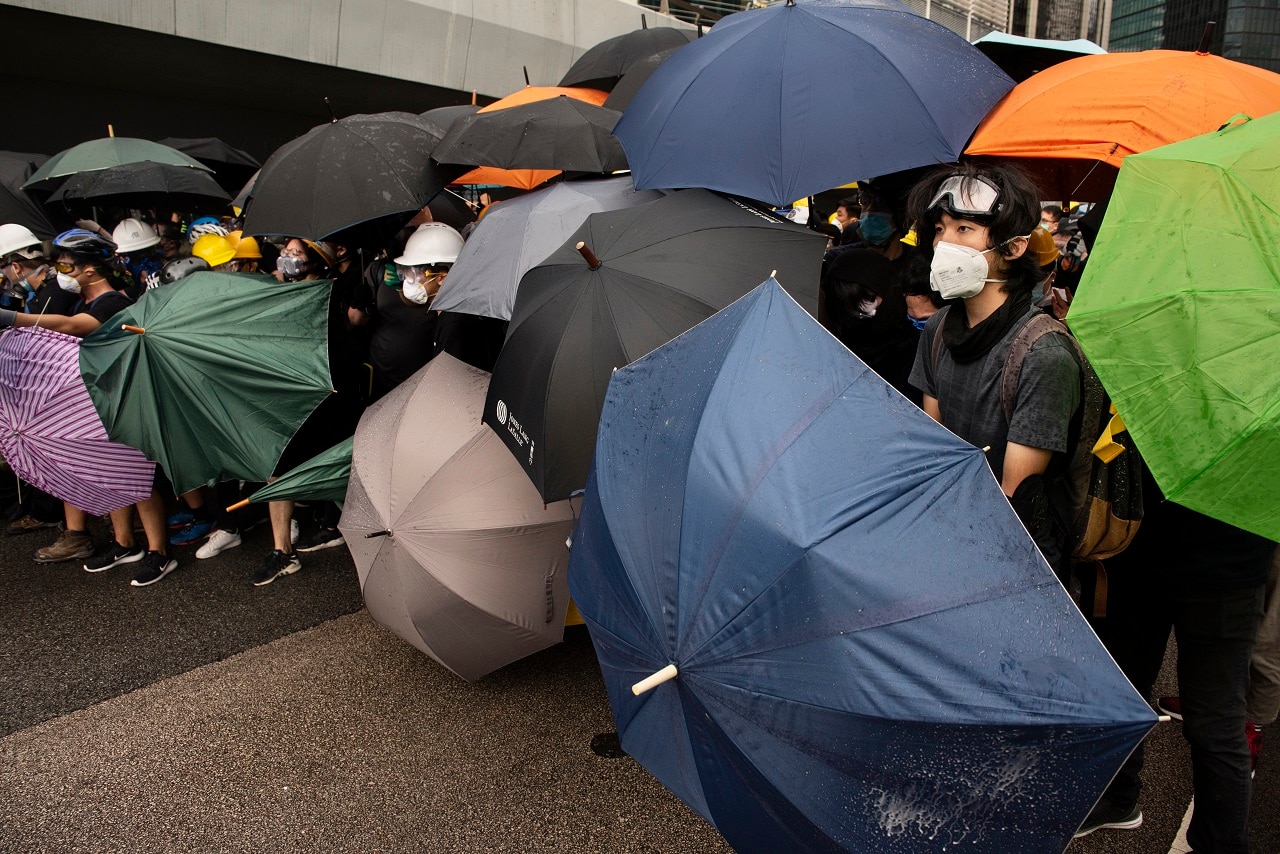 Although Hong Kong returned from British to Chinese rule on July 1, 1997, it is still administered separately under an arrangement known as "one country, two systems".

The city enjoys rights and liberties unseen on the autocratic mainland, but many residents fear Beijing is already reneging on that deal.

Activists have organised a march every handover anniversary, calling for greater democratic freedoms - such as the right to elect the city's leader. 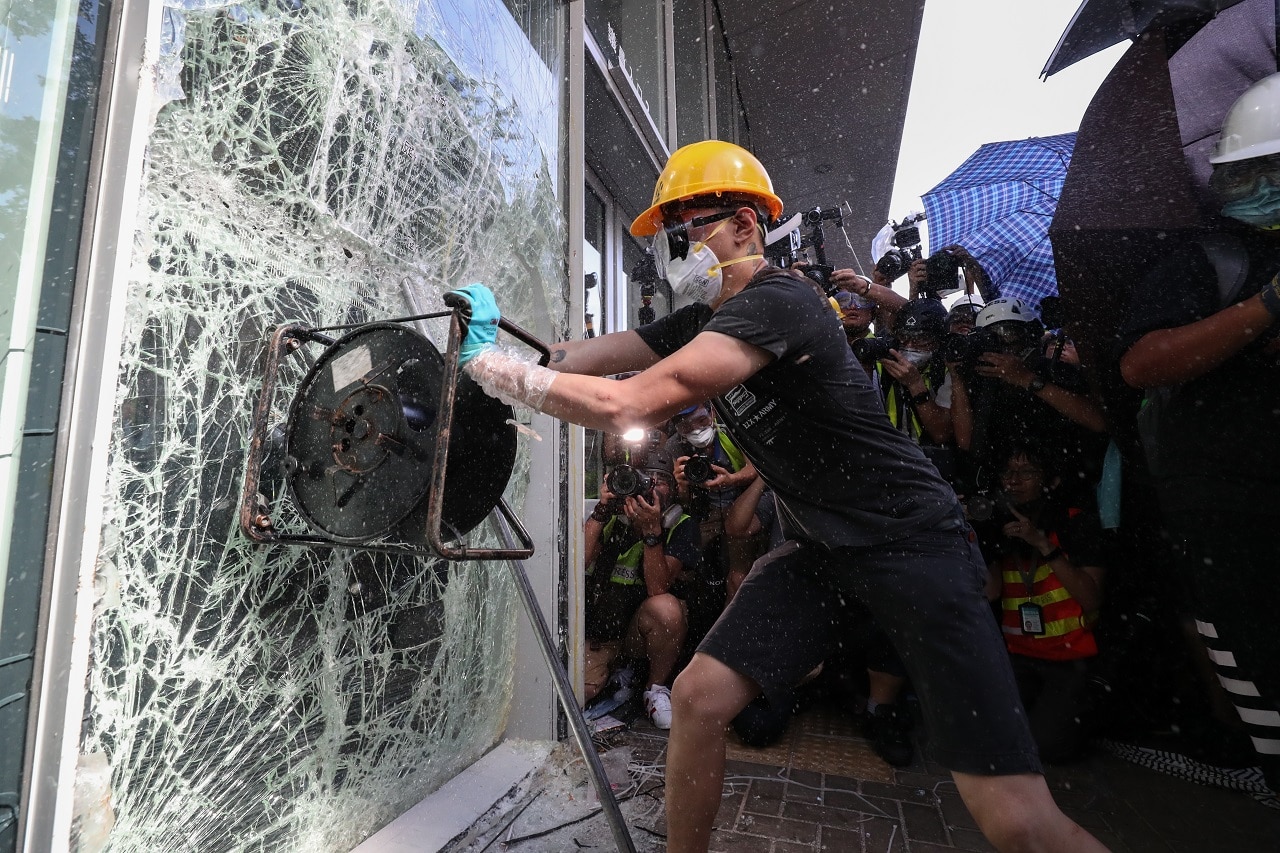 A protester breaks a window of the Legislative Council.
AAP

They have mustered large crowds in recent years - including a two-month occupation of parts of the city centre in 2014 - but have failed to win any concessions from Beijing.

"When I heard that there are clashes outside (parliament), I was very worried," Amy Siu, a 37-year-old accountant taking part in the rally, told AFP. "I'm worried about the youngsters' safety. I hope they can be rational."

"I would not blame the young people, I blame the government," added an 80-year-old protester who gave his surname Yeung. 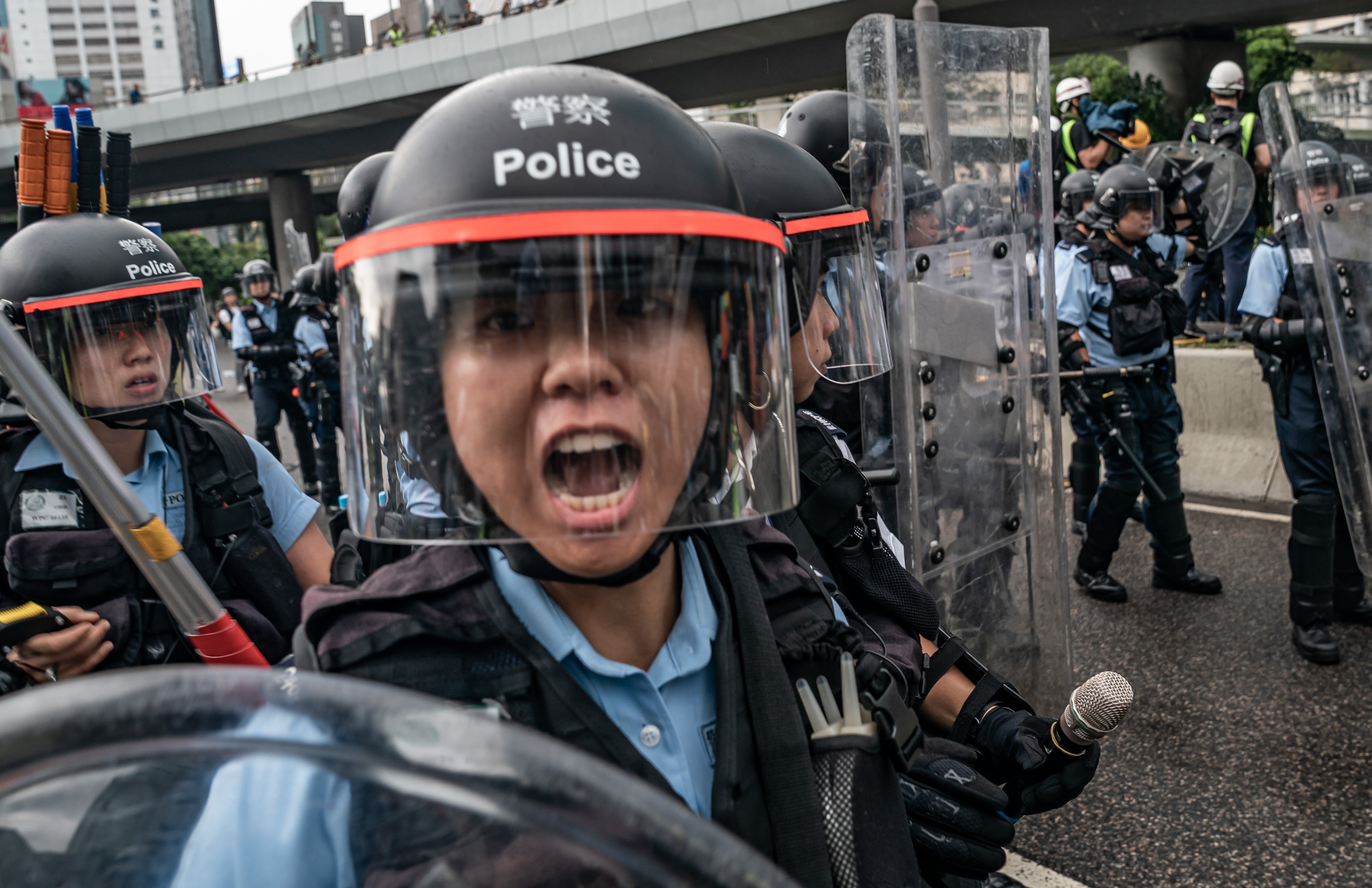 Police officers during a clash outside the Legislative Council Complex.
Getty

This year's rally is framed by unprecedented anti-government protests of the past three weeks that have drawn millions, with the public angry over police use of tear gas and rubber bullets.

The spark for the current wave of protests was an attempt by chief executive Carrie Lam to pass the Beijing-backed extradition law, which she has now postponed following the public backlash.

But she has resisted calls to permanently shelve the law or step down. 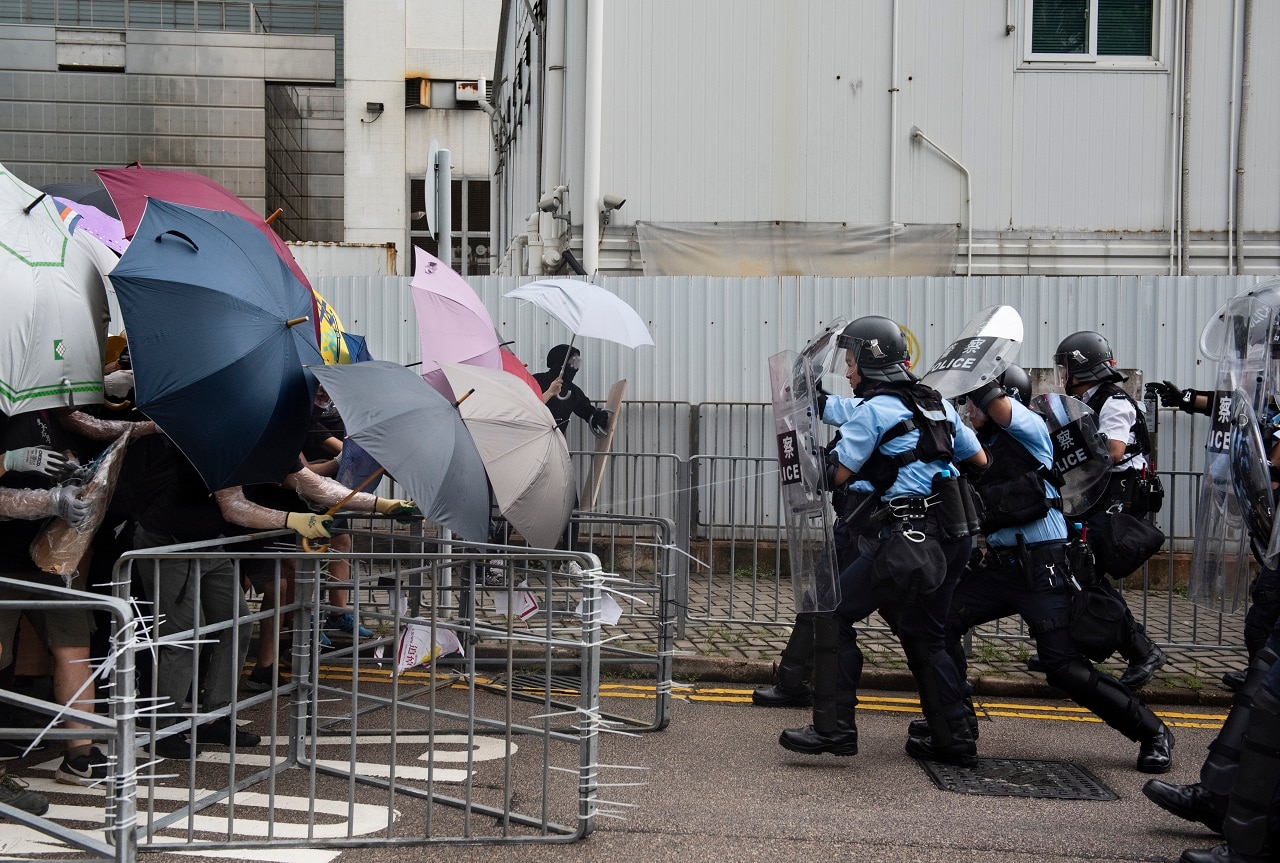 As a result the demonstrations have morphed into a wider movement against her administration and Beijing.

Ms Lam - who has kept out of the public eye since her climbdown and has record low approval ratings - attended a flag-raising ceremony early Monday, marking the moment the city returned to Chinese ownership 22 years ago.

But she and other dignitaries watched from indoors due to "inclement weather" - the first time in the ceremony's history.

Her speech stuck to the conciliatory tone she has used in recent weeks. Anti-extradition protesters use makeshift shields to defend themselves.
Getty

"What happened in recent months has caused conflicts and disputes between the government and residents," Ms Lam said. "It has made me fully understand that as a politician, I need to be aware and accurately grasp the feelings of the people."

She then raised a champagne toast alongside cabinet officials and two of her predecessors.

Police said 13 officers were also sent to hospital after being doused by an "unknown liquid" from protesters while the government released a statement condemning protesters for using "extreme violence." 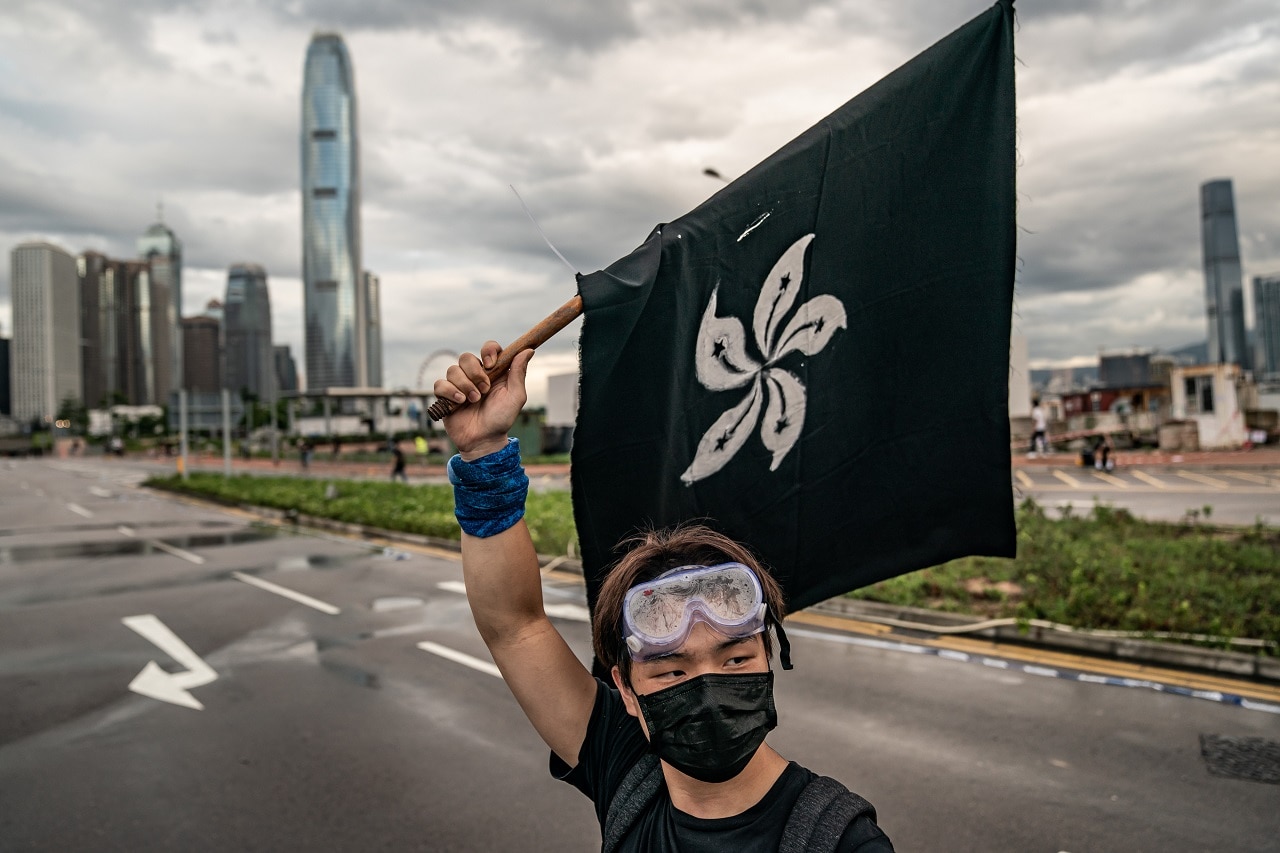 Australia's former Consul General to Hong Kong Jocelyn Chey told SBS News Ms Lam "is not popular with the people of Hong Kong but if she were to step down then she would be replaced by another similar person - this is really what's at the heart of people's discontent".

Ms Chey said she was worried the violence may escalate and was not sure how it will be resolved.

"I think we have to look to Beijing for a solution ... it's really in their hands, it's not something that can be achieved by the people of Hong Kong," she said.