A Western Australian police officer who fatally shot an Aboriginal woman has been found not guilty of murder. 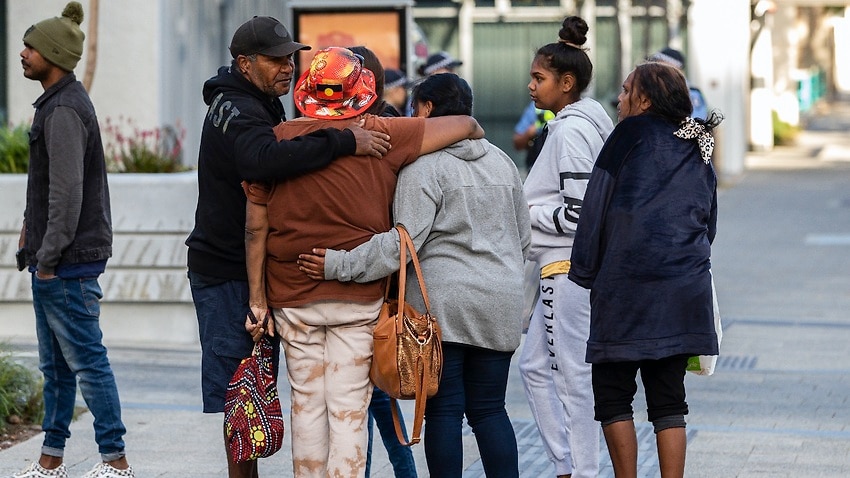 Family and supporters of a woman, referred to as JC at the family's request, leave the District Court of West Australia in Perth on 5 October 2021. Source: AAP

A Western Australian police officer who fatally shot a 29-year-old Yamatji woman two years ago has been found not guilty of murder.

The jury in the high-profile Supreme Court trial took around three hours to deliberate, before delivering its verdict.

The officer was also found not guilty of the lesser charge of manslaughter.

The accused officer, who cannot be named under a court order protecting his identity, had pleaded not guilty to one count of murder.

The accused shot the 29-year-old, now known by her initials JC, on 17 September 2019, after she was seen carrying a knife on a suburban street in Geraldton.

Through his lawyer Linda Black, the accused accepted during the trial that he caused JC’s death by shooting her in the abdomen, with a single hollow-point bullet from his police-issued firearm.

The accused claimed that he shot JC in self-defence.

The accused took the witness stand during the trial, and gave evidence that JC raised a knife and was preparing to lunge at him the moment he shot her.

Eight police officers in four vehicles arrived in Petchell Street in Rangeway around 6:20pm, after a member of the public reported seeing JC walking nearby with a large knife.

The prosecution argued that the accused’s account that JC raised the knife towards him simply never happened, and that he unlawfully and unjustifiably took her life.

State prosecutor Amanda Forrester SC said that the accused unnecessarily escalated a situation in which the eight officers present at the scene should have been able to disarm JC without resorting to lethal force.

Ms Forrester told the jury that the accused obliterated every “strategic and tactical” advantage that he and the other officers had, that he ran towards JC with his gun drawn and fired his weapon only 16 seconds after getting out of his vehicle.

JC had only recently been released from prison and had significant mental health and substance abuse issues.

She was confronted by three officers on Petchell Street and the accused was the only officer to draw his firearm.

First Class Constable McLean, who stood beside the accused the moment he shot JC, also testified that the deceased woman raised the knife the moment before she was shot.

In reaching its verdict, Supreme Court Justice Robert Mitchell instructed the jury to consider whether the accused acted in self-defence, whether his use of force was reasonable in the circumstances, and whether the accused intended to inflict an injury that was objectively likely to endanger JC’s life.

On the first day of the trial, proceedings were aborted after members of the public seated in the gallery yelled “murderer” at the accused while he sat in the courtroom.

The outburst took place in front of the members of the jury, and as a result, the jury was dismissed, a new jury was arranged, and the trial started for a second time the following day.

The trial lasted for three weeks and heard from more than sixty witnesses.

CCTV taken from a home 65 metres away from the scene was played extensively to the jury.

Family and supporters of both the accused officer and JC were present in the courtroom throughout the trial.

The 12 members of the jury were required to return a unanimous verdict.