As protests resumed for an 11th day around the US, the mood has become more peaceful but no less determined, while the mayor of DC renamed a Washington street "Black Lives Matter Plaza".

Washington Mayor Muriel Bowser has renamed a street in front of the White House "Black Lives Matter Plaza" and had the slogan painted in huge yellow letters on the roadway in an apparent rebuke of President Donald Trump's militaristic response to US protests over police brutality.

Ms Bowser tweeted footage of the street painting on a section of 16th Street in the US capital with a message to Breonna Taylor, a black woman killed by Louisville, Kentucky, police who has inspired nationwide protests along with George Floyd, a black man who died on 25 May in Minneapolis police custody.

"Breonna Taylor, on your birthday, let us stand with determination," Ms Bowser wrote. "Determination to make America the land it ought to be."

Ms Bowser and Mr Trump are at odds over the president's use of federal law enforcement agencies and military police to break up a protest on Monday night so he could have a photo op outside a church near the White House.

Governor @PhilMurphyNJ — on behalf of the 706,000 residents of Washington, DC, I ask you to withdraw the @NJNationalGuard from our city immediately.

While I appreciate their service, I never asked for them to come to our city. Their presence is unnecessary. pic.twitter.com/A9laGBoJrv

“We want troops from out-of-state, out of Washington, DC,” Ms Bowser said at a news conference on Thursday.

On Friday, a US official said the Pentagon would be sending back the remaining 900 active-duty troops who had been sent to the Washington, DC, area to potentially respond to civil unrest.

The city also installed a street sign for Black Lives Matter Plaza at the intersection of H and 16th Streets, site of the St John's Episcopal Church where Mr Trump, holding a Bible, stood for his Monday night photo op.

Using rollers and buckets of yellow paint, with brushes to finesse the edges of the letters, a group of people - men and women, of different races and ages, some wearing roller blades, some work boots - painted the street. Many were sweating under the warm sun. 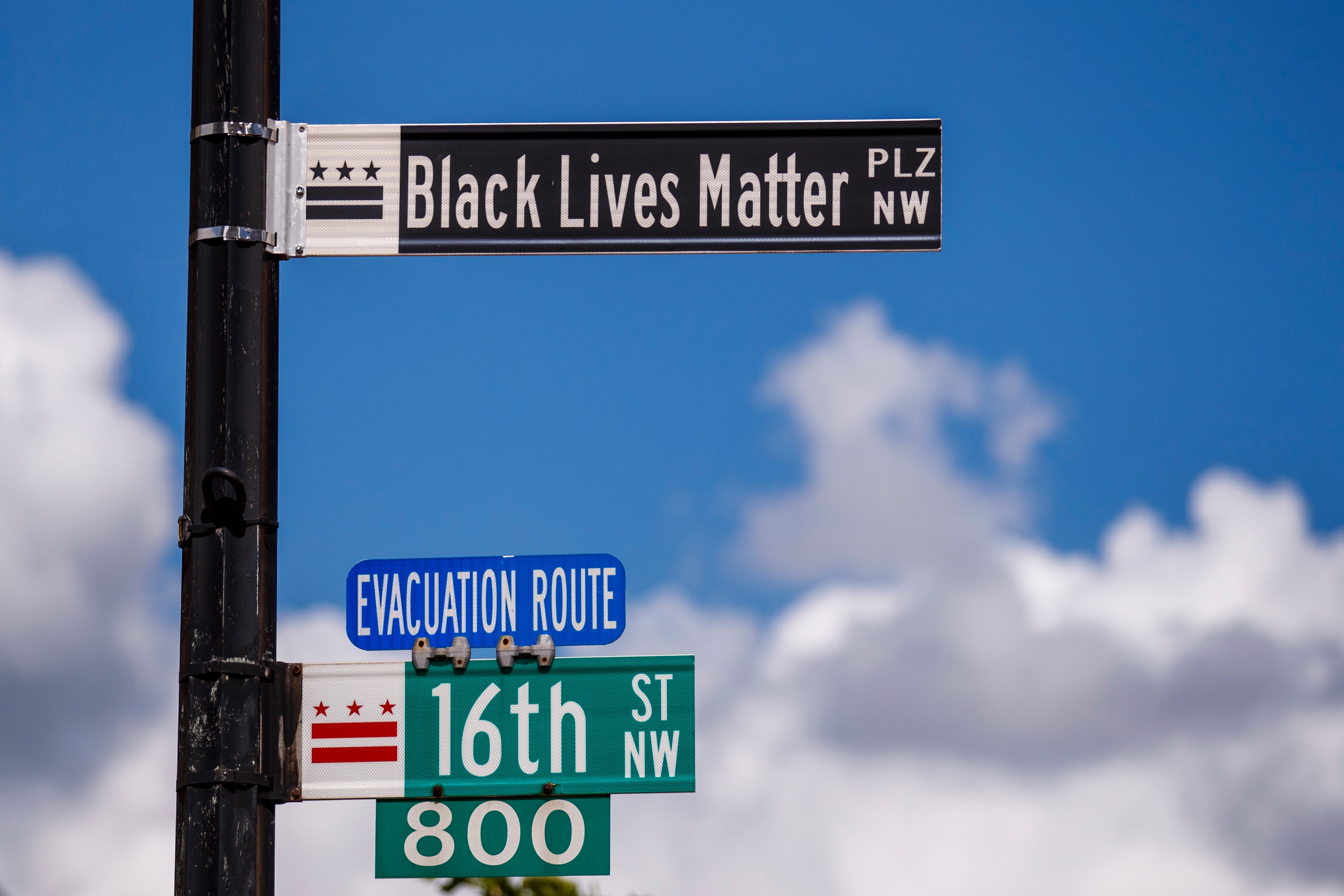 New street signs read Black Lives Matter on 16th Street near the White House, where there have been of days of protests over the death of George Floyd.
EPA

Mr Trump used his favourite medium Twitter to deliver a barbed response to Ms Bowser. "The incompetent Mayor of Washington, D.C., @MayorBowser, who’s budget is totally out of control and is constantly coming back to us for “handouts”, is now fighting with the National Guard, who saved her from great embarrassment... ...over the last number of nights. If she doesn’t treat these men and women well, then we’ll bring in a different group of men and women!"

The incompetent Mayor of Washington, D.C., @MayorBowser, who’s budget is totally out of control and is constantly coming back to us for “handouts”, is now fighting with the National Guard, who saved her from great embarrassment...

Mr Trump, buffeted by the economic blow of the coronavirus pandemic and protests, on Friday again said he had advised some state governors to call in the National Guard.

"Don't be proud. Get the job done. You'll end up doing much better in the end, calling the National Guard. Call me," Mr Trump said in remarks at the White House. The viral videos that show police violence during the US protests

"You have to dominate the streets. You can't let what's happening, happen," Mr Trump said, echoing some of his previous remarks.

Nationwide protests, largely peaceful, have at times turned to vandalism, looting and clashes between police and protesters. But Friday marked at least the third day of more subdued demonstrations, including a heartfelt tribute to Mr Floyd on Thursday in Minneapolis that drew family members, celebrities, politicians and civil rights advocates.

Demonstrations resumed for an 11th day in many cities including Atlanta, Denver, Detroit, Los Angeles, Minneapolis, New York and Washington. Protests were planned for Washington on Saturday, and memorial services were expected over several days with Floyd's funeral planned for Tuesday.

A change in mood at most demonstrations reflected a determination voiced by many protesters and organisers to turn outrage over Mr Floyd's death into a renewed civil rights movement, seeking reforms to America's criminal justice system. 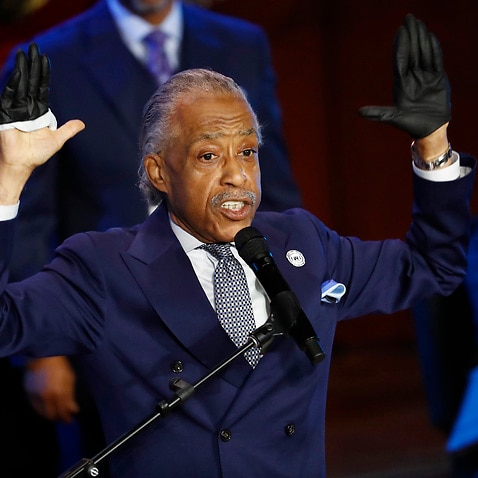 In Minneapolis, where Mr Floyd died, the city agreed to ban police chokeholds and require officers to intervene any time they see unauthorised force by another officer.

The changes are part of a stipulation between the city and state officials who launched a civil rights investigation into Mr Floyd's death.

The City Council is expected to approve the agreement, which will be enforceable in court, later on Friday. 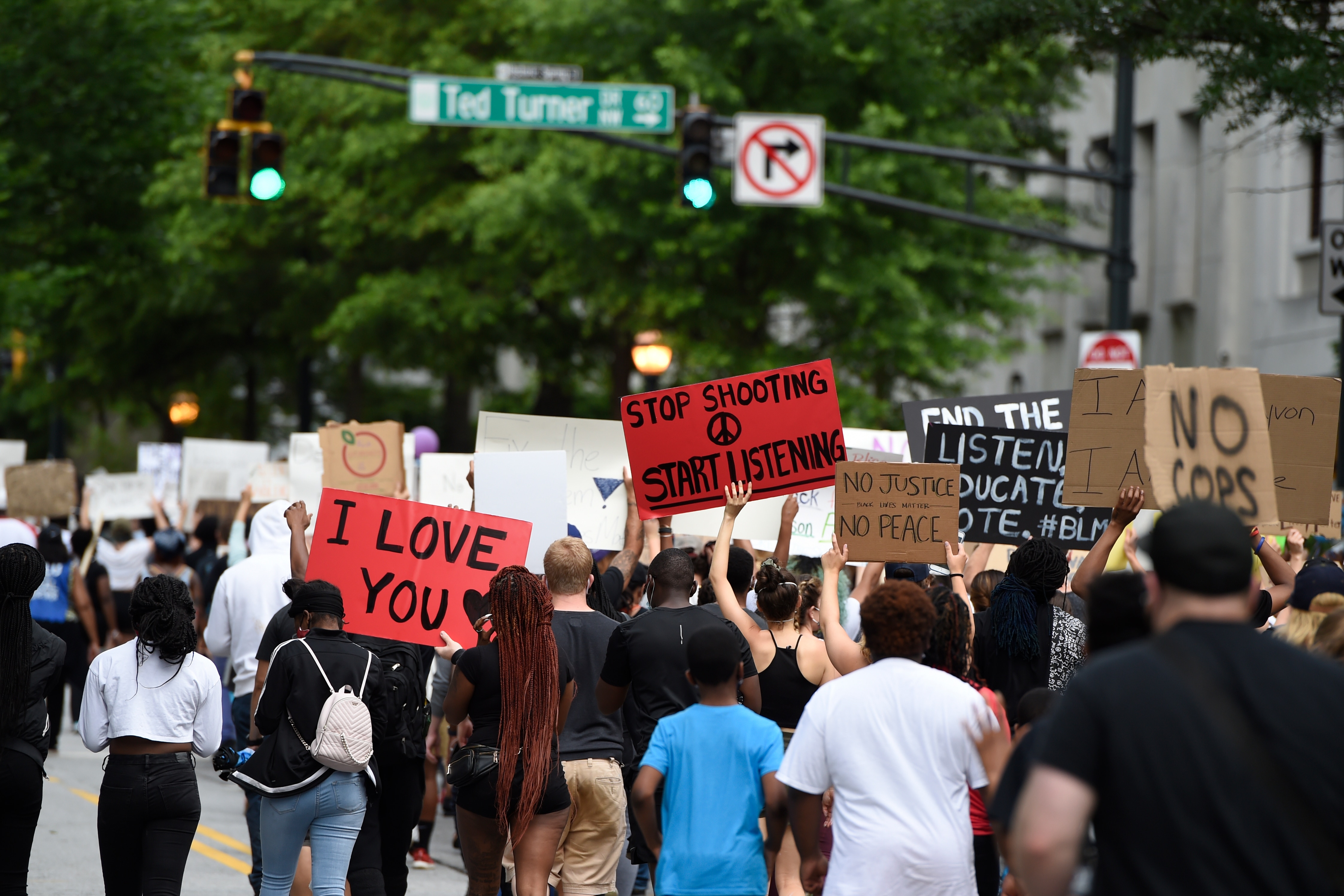 The Republican Mr Trump, running for re-election on 3 November against presumptive Democratic candidate Joe Biden, was cheered on Friday by an unexpected jump in US employment in May. Millions of Americans have lost jobs while much of the country has been under lockdown because of the pandemic.

When pressed to outline his plans, Mr Trump said: "Our country is so strong and that's what my plan is, we're going to have the strongest economy in the world." 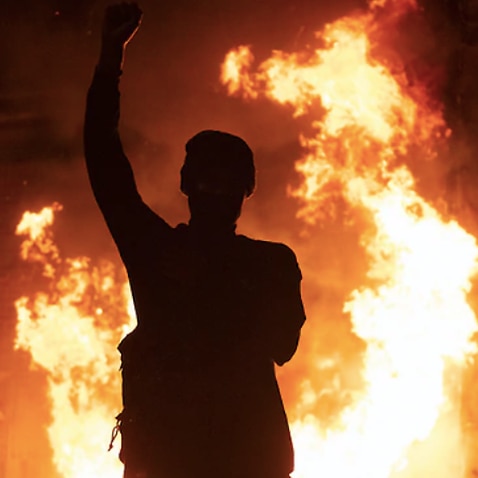 Mr Trump - accused by critics, including his former Defense Secretary Jim Mattis, of dividing America - called for law enforcement to treat all people fairly and equally, regardless of race, gender, colour or creed.

On Wednesday, after long refusing to explicitly criticise a sitting president, Mr Mattis roundly denounced Mr Trump for militarising the US response to civil unrest.

Despite the improvement overall in Friday's jobs report, unemployment among African Americans was higher in May than in April, a statistic that critics were certain to cite as underscoring racial disparities in American society.