First Lady Melania Trump says she has 'more important things' to focus on than the alleged infidelities of her husband, US President Donald Trump.

In an interview with ABC News, excerpts of which were broadcast early Friday, the US first lady did not deny her husband's alleged history of philandering.

But Melania Trump insisted she doesn't dwell on it.

"It is not a concern and focus of mine," she said in the interview. "I'm a mother and a first lady, and I have much more important things to think about and to do."

"It's not always pleasant, of course, but I know what is right and what is wrong and what is true and not true."

Asked whether she loved her husband, she answered: "Yes, we are fine. It's what media speculate, and it's gossip. It's not always correct stuff." ABC conducted the rare interview of the Slovenia-born 48-year-old former model and the president's third wife while she was in Africa last week.

After living in the White House for nearly two years in the shadow of one of the most controversial and scandal-tarred presidents of modern times, she appeared confident but also controlled, keeping her answers to difficult questions short.

The interview came just over three weeks before the midterm congressional elections, in which Trump's record is expected to play a big part in how voters cast their ballots.

Sitting in stretch jodhpurs with a safari pith helmet at her side, Trump gave a wry smile when asked about comments about her marriage from the president's lawyer Rudy Giuliani. 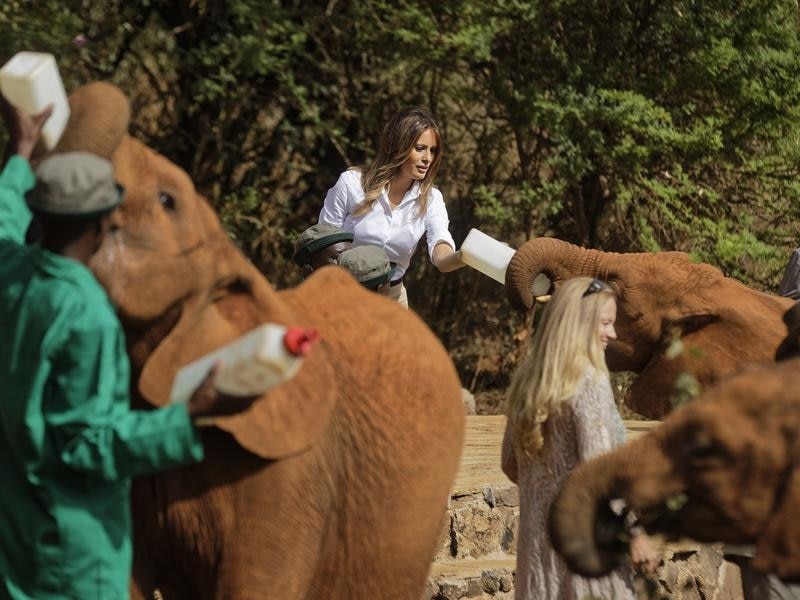 The US first lady laughed after one of the elephants made a sudden move and she lost her footing. (AAP)

"I never talked to Mr Giuliani," the first lady said.

ABC said the full interview will air later Friday, with Trump discussing her trip to Africa, her campaign against bullying and the controversies swirling around the president.

She gave a surprise answer to why she chose to fight against cyber-bullying with her "Be Best" campaign.

"I could say I'm the most bullied person in the world," she said, or "one of them, if you really see what people are saying about me."

Trump has predecessor who as American first ladies suffered gossip about their husbands' alleged affairs.

Hillary Clinton endured husband Bill Clinton being impeached in 1998 for lying about his extramarital sex.

John F. Kennedy, president from 1961-63, was another serial cheater on wife Jackie, though his affairs were kept out of the news by a compliant media.

Mysterious and impenetrable, Melania is constantly scrutinized for her reaction: Is she holding his hand? Why aren't they together much? Will she move back to New York with their son Barron?

She scoffed at such talk in the ABC interview. "I am enjoying it. I really love to live in Washington and the White House," she said.

Trump has not given such a long interview since arriving in the US capital.

Katherine Jellison, an Ohio University historian, noted the timing of the interview coincides with intense scrutiny of men amid the #Metoo movement.

"The Trump administration has been under a lot of scrutiny on gender issues," Jellison told AFP.

"So maybe she thought the timing was right to assert herself as a strong, independent woman, at a time when there was much negative press about the treatment of women in Trump's America."

Like past first ladies, Melania also faces criticism of her fashion choices, which lean toward well-cut, refined but not flashy clothes from Ralph Lauren and French-American designer Herve Pierre.

She took heavy flack in June when she wore a $39 Zara jacket that had "I really don't care, do u?" written on the back, as she embarked on a trip to the Mexican border to see immigrant children who had been separated from their parents under her husband's much criticized policy.

It was unclear who was the target of that message.

Donning a pith helmet during her Nairobi stop last week, and then an "Indiana Jones"-style Panama hat while in Egypt, Melania Trump also drew fashion maven reprimands as "insensitive" to the continent's colonial history.

Reporters should "talk about my trip and not what I wear," she scolded during the journey.