He boxes. He snowboards. And has the physique to prove it. Social media users across the world are swooning over Canada's new PM.

The country that unleashed Bieberfever has social media swooning over a new Justin.

He's an avid boxer with the physique to show for it. He snowboards. And he's the new prime minister of Canada.

Forget about his views on climate change or the crisis in Syria. Some commentators had a more pressing question about the former school teacher who defeated Conservative Prime Minister Stephen Harper in Monday's elections.

"Is Justin Trudeau the sexiest politician in the world?" read the title of the UK-based Mirror newspaper.

"The votes are in and Canada has come out of its election with a super hot new leader," it wrote.

Hot damn Canada. Your new PM? I'd like to prime his minister & house his commons YOU KNOWWHATIMSAYIN #JustinTrudeau #CanadaElections #woof

A 2012 photograph swiftly circulated on the internet showing a shirtless Trudeau, sporting a mane of shaggy dark hair, flexing his arms after a boxing match with currently suspended Canadian senator Patrick Brazeau.

That immediately drew comparisons with Russian President Vladimir Putin, another world leader with a habit of posing shirtless.

The buzz is fitting for the man who was born to the glitz surrounding his father, the late prime minister Pierre Trudeau, a dashing bachelor when he rose to office in 1968.

Known for setting Canada on a firm liberal course, the elder Trudeau also enthralled the world with his whirlwind social life.

While in office, he dated movie stars including Barbra Streisand, married 22-year-old Margaret Sinclair, had three children with her, including Justin, then separated from her. 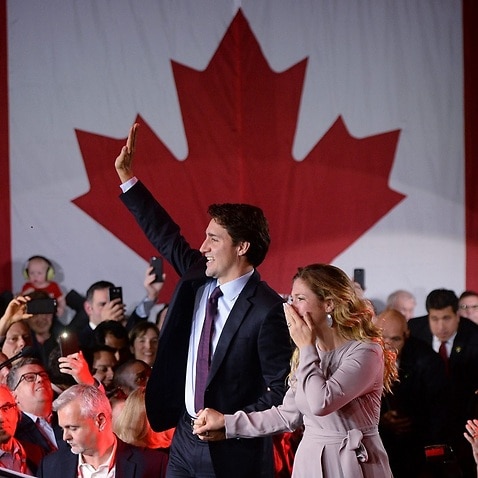 But Justin Trudeau tries to project an image of family man, not ladies' man. He has been married to former television host Sophie Gregoire since 2005, and they have three young children.

During the campaign, the Conservatives tried to dismiss him as an inexperienced lightweight, snarking in television ads about his "nice hair".

But Trudeau didn't try too hard to distance himself from his boyish appeal.

Clad in a varsity jacket on election day, Trudeau grinned widely as he hopped on to the bent legs of two aides to form a pyramid in front of his campaign plane, his muscular thighs bulging beneath his jeans.

Canadian media noted the buzz with bemusement. "The world meets Justin Trudeau and likes what it sees," read a headline on CBC.ca.

Me: This is the new Prime Minister of Canada. Krissy: Are you joking? Me: No. Krissy: We're moving to Canada. pic.twitter.com/gdL8c2zsy2