Indonesia will go to the polls on 17 April. But in West Papua, independence groups are calling for a boycott.

A West Papuan independence leader and Nobel peace prize nominee is calling for a mass boycott of Indonesia’s upcoming elections to bring attention to their independence struggle.

Benny Wenda was granted political asylum in the United Kingdom 16 years ago - following an escape from custody while on trial in West Papua.

In exile, he has led the campaign for the self-determination that his countrymen say they have lacked since Indonesia gained internationally-recognised control of West Papua through a disputed referendum vote 50 years ago. “This is a critical time for our people because the election for a colonial occupied force is not legitimate,” Mr Wenda said.

From now on we will not take part in Indonesian elections because we are not Indonesian.

“We are Melanesian. We are the Pacific islanders… People are fed up - enough is enough.”

Boycott the #IndonesianElections and Rally for #Referendum! This year marks exactly 50 years since #WestPapua was illegally occupied by #Indonesia in 1969. Now is the time for us a;; to unite for a #FreeWestPapua.
My new statement on behalf of #ULMWP: https://t.co/eybC3ckryY pic.twitter.com/IrBu8M0Kab

On 17 April – more than 190 million registered Indonesian voters will go to the polls for presidential and general elections.

"There are both populists that are operating on a populist agenda," he said.

"Jokowi is trying to broaden his appeal out to the middle ground of Indonesian voters. Prabowo is appealing much more to a base." Professor Kingsbury said despite making up some recent ground, Mr Subianto is well behind President Widodo in most polling.

"The polls have been showing that Jokowi is running at around the 50 per cent mark in terms of popularity," he said.

"Prabowo is running at around the 30 per cent mark with a significant number of undecided voters."

This is the second time the two rivals will face off after President Widodo defeated Mr Subianto in elections five years ago.

According to the West Papua National Committee, hundreds of thousands of West Papuans boycotted those elections in 2014. 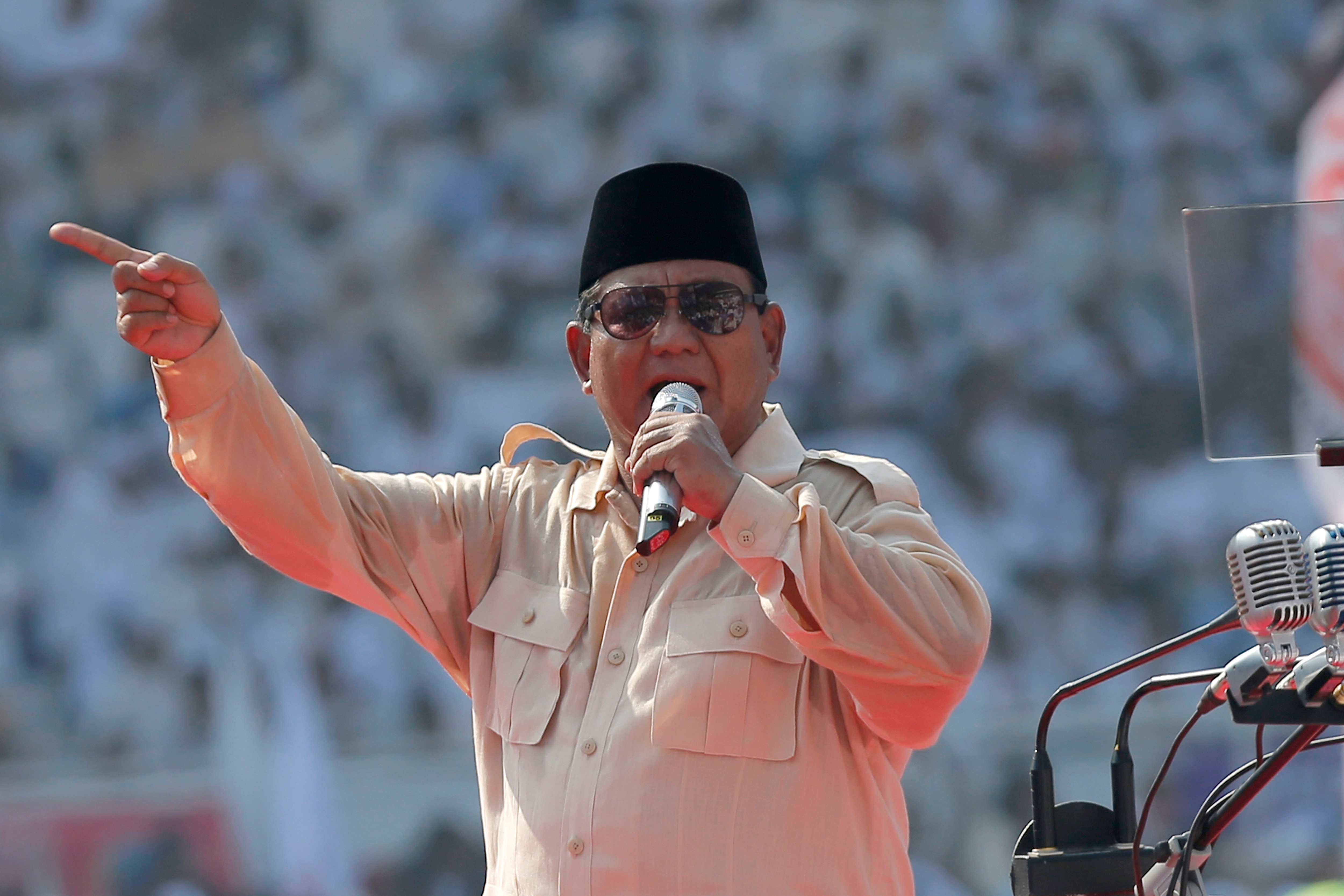 Indonesia's control of West Papua has long been a flash-point for ongoing low level conflict between Indonesian forces and Indigenous Papuan militants.

Indonesia recently deployed 600 soldiers to protect the building of a major highway in West Papua, in response to the killings of 19 Indonesian road workers. The road project was a signature promise that President Joko Widodo made to the region.

In following clashes with militants, Indonesia’s military said three of its soldiers were killed along with up to 10 rebels.

But despite this escalation, Professor Kingsbury said West Papua has essentially been a "non-issue" in the election campaign.

"Both candidates believe that that Melanesian West Papuans should accept they are Indonesian." he said.

"[They believe] the separatist movement [in West Papua] is essentially a criminal organisation."

In a statement seen by SBS News, the West Papua Liberation Army (TPNPB-OPM) declared its intention to support the push to boycott 2019 elections.

“The TPNPB-OPM never recognized the existence of the Colonial Government of the Republic of Indonesia in Papuans Customary Lands,” the statement reads.

Human Rights Watch’s Indonesia researcher Andreas Harsono said the recent attack on Indonesian road workers was one of the biggest such escalations in conflict over the past 20 years.

He said the Indonesian military response has come with a humanitarian cost, displacing up to 1,500 villagers from the Nduga regency where the attack took place.

“Obviously the villagers are very scared [and] traumatised,” he said.

“That area has been a military operation area over the last 30 years.

There are about 3.5 million voters in the province of West Papua – that make up less than two per cent of Indonesia’s total votes.

Professor Kingsbury said Melanesian West Papuans make up about 1.5 million of those eligible voters - meaning any boycott would have no real consequence.

"From a Melanesian West Papuan perspective they want negotiations towards a referendum on independence," he said.

"Neither Jokowi or Prabowo would countenance that."

Mr Harsono said both candidates reluctance to address ongoing concerns in West Papua during their campaigns was not always the case.

“This is totally different from five years ago when both candidates promised that if elected they [would] stop the restriction of foreign journalists and UN access to Papua,” he said. At the session, the Indonesian government stated that non-governmental organisations had interacted with local government officials.

The statement said past human rights abuses were under investigation by Indonesia’s Attorney General and its national commission on human rights.

“Violence in the Nduga region was regrettable, and the government was attempting to address the situation,” the statement read.

“The reality on the ground is that those elections don’t really benefit the people of West Papua,” Melbourne-based West Papuan Lewis Prai Wellip told SBS News.

He is a spokesperson for the West Papua Liberation Army in Australia and his uncle Jacob Prai was an independence leader – who helped proclaim an independent West Papua nation in the 1970s before being forced into exile.

“I don’t think the people of West Papua would vote for both of them," he said, referring to both Indonesian candidates. Melbourne-based Lewis Prai Wellip is a representative for West Papuans in Australia.
Supplied

Mr Prai Wellip himself too fled West Papua with his family - held on Manus Island during the 1980s before later gaining protection status in Australia.

He said Indonesia "cannot afford to sweep" the West Papua issue "under the carpet anymore".

“Indonesia hasn’t looked into the root cause of the problems in Indonesia which is our political rights and our right to independence,” he said.

“With this election coming up I would appeal to the international community to look into the rights of our people and take it seriously.”

'The song is the same'

“There is one saying in West Papua that you can change the singer but the song is the same old one that will be sung over and over,” Mr Kareni said.

“For us we know that whoever is going to be the president - it will be the same tune that will be playing to West Papua.”

Professor Kingsbury said both candidates have shown no willingness towards West Papuan independence.

“Prabowo certainly has a reputation of being a military hard man and has seen active service in West Papua,” he said.

“Jokowi has [also] been keen to show himself to be a nationalist and has overseen the military crackdown in West Papua in response to the Nduga killings of early December last year.” Growing up in West Papua

Growing up in the regional area of Sentani - near the north coast line of the Papuan province – he recalls facing discrimination because of his dark skin colour.

“If you are trans-migrant you are more likely to get into schools or even get jobs – [than] if you’re brown skin – if you’re Papuan.”

He said many believe whoever is elected on April 17 – it won’t make a difference.

“The candidates up until now have played it safe by not getting involved in the political and human rights issues in West Papua,” he said.

“There is no prospect for better life or solution in for West Papua if either one in elected.”

President Widodo has committed to several economic development programs in West Papua - including the new highway, which triggered the most recent violence - in an effort to respond to low standards of living.

But Human Rights Watch's Mr Harsono said there is a perception among Indigenous Papuans the president has failed to fulfill other promises.

“Papuans are unhappy with where Jokowi has failed to deliver especially for Papua on [investigating] human rights abuse," he said. Despite many West Papuans long-time campaign for independence, Professor Kingsbury said Indonesia feels no obligation to justify its control of the territory.

"They believe that as a former part of the Dutch Empire of the East Indies that West Papua essentially [was] the completion of the independent Indonesian state," he said.

"Within West Papua that interpretation is roundly challenged."

Professor Kingsbury says support for independence is unlikely to change in the near future because major international powers, including Australia, don't recognise West Papua's self determination.

"Realistically the idea the West Papua will get a vote on independence at this stage is quite fanciful."

It is time for Indonesia to allow us to choose our own destiny. ‘Boycott must be peaceful’

“We are calling for a boycott because we have already had elections through the people’s petition,” he said.

But Mr Wenda told SBS News that any boycott must be done “peacefully”.

“We (do) not pick up the gun to fight with Indonesia,” he said.

“It is time for Indonesia to allow us to choose our own destiny.”