A basketball program in Sydney's western suburbs is becoming a major recruiting ground for American colleges, with dozens of South Sudanese-Australian players being offered US scholarships.

Blacktown's Police Citizens Youth Club, in Sydney's west, has served as a base for young South Sudanese-Australians with a penchant for basketball.

The club has been developing new talent for more than a decade, but now it's in the midst of a major transformation - from a centre for recreational basketball, to a program quickly becoming a recruiting ground for top basketball prospects.

They call themselves the Savannah Pride and many of the South Sudanese-Australian athletes are making the jump from playing the sport as a hobby, to making international careers out of it.

Mayor Chagai's childhood in South Sudan was filled with violence and uncertainty.

He was a 'Lost Boy' who, aged seven, was forced to flee his home - and his parents' care - as South Sudan was thrown into volatility with the civil war in the early ‘90s.

After a trek spanning three months, Chagai reached the Kakuma camp in Kenya, the place where his passion for basketball - which he used to escape reality - was born.

"I didn’t have my mother or any of my siblings. I was just a young person who arrived in Kenya at the refugee camp at nine years of age. Every time I would think about my family, I would get away from that stress by using the sport", Chagai told SBS World News.

When Chagai came to Australia, nearing 20, he turned to basketball within a matter of weeks.

With a group of other South Sudanese refugees known to Chagai in Kenya, he started playing at the PCYC because it was conveniently located near his home and cost only $2 to enter.

Chagai holds basketball in the highest regard for the way it has helped him cope with hardships. In 2006, he began coaching younger players in the South Sudanese community to help them find a similar passion for the sport.

When Chagai started coaching the group more than 10 years ago, there were around 20 participants. Now, Coach Mayor, as he is referred to by the kids, oversees at least 150 members - most are high school students who attend weekly, and some are non-Sudanese.

After a number of name changes, 'Savannah Pride' was decided upon a few years ago. Coach Mayor says this is an apt name that reflects the group's strong connection with one another - like a pride of lions. He says basketball has grown into something that brings all walks of life together - much like the Savannah tree.

Standing out at an international level

The rise of South Sudanese players like Thon Maker - a 216cm athlete out of Perth who was the 10th player picked in the United States' National Basketball Association draft last year - has caught the attention of American coaches.

"The success of players like Thon has increased the interest of so many coaches to recruit the South Sudanese-Australians, because they have some sort of character and natural ability that they can be so great," Chagai said. Thon Maker, a South Sudanese - Australian from Perth, was the 10th player picked in the United States' National Basketball Association draft in 2016.
NBA

Today, the Savannah Pride club is looking to send some of its own players on Maker's path to success.

In 2008, the first Savannah Pride member, Ater Majok, was recruited to play at the University of Connecticut.

The program has since become a well known hot spot for coaches from the US, with 20 players making their way to the States on athletic scholarships so far. These scholarships have taken them to private high schools and even universities, but several of them have eventually dropped out and returned to Australia.

Chagai says it's because they were too consumed by the excitement of a basketball scholarship to analyse whether the offer would actually benefit them.

"Some kids don't understand. When they go to America, they're ending up getting surprised," Chagai said.

"And some of those coaches in between that are taking them, they're trying to do maybe a little bit behind the door, or not being straight up with the kids, and then the kids end up getting stuck. And they're not being told the truth."

The challenges of heading overseas

Omar Akech had been with Savannah Pride for seven years when he was offered a scholarship to play for the Combine Academy in the US state of North Carolina.

Akech says he never anticipated just how difficult playing at a US prep school would be.

"It was pretty challenging. Just going over there at the age of 19, it was very different, you know, being so young, finishing high school and just going over there, and not knowing what's going to happen. It was just challenging for the first couple of months", Akech told SBS World News.

After a year at Combine Academy, Akech returned to Australia, struggling to balance the demand of sporting, schooling and personal commitments. Akech was unaware of how crucial good grades are in order to get into the American college system and says the pressure to perform well at both school and basketball is the overwhelming reason why many opt to terminate their scholarships.

“Most of the people come back because of the school system," he said.

"It’s very hard to get into college without having the right grades and a coach can try and do so much to get you there, but most of the time it’s on you to study and put your head down."

In order to succeed in America, Akech says hard work is needed both on and off the court.

Akech says Coach Mayor is a father figure many Savannah Pride members never had and says the club can always count on his guidance to put them onto the right path.

Support after returning to Australia

It's the need to emulate a father figure while managing the club's international interests that's the current challenge for Savannah Pride.

Chagai says he does all that he can to ensure players who return understand that there is a life after sports and to feel well supported.

He assists those like Akech who come back to Australia through mentoring, support with higher education enrollments and help finding jobs.

He says he wants to ensure everyone is on the right track, in Australia or beyond. That, he says, is a core part of the Savannah Pride, that the team sticks together through anything, as a family.

"We are part of them, so we still support them when they come back", Chagai said. 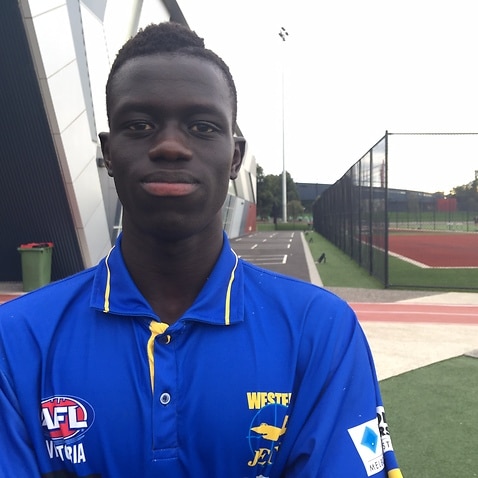 From South Sudanese refugee to the 2018 AFL draft: Buku Khamis is making his mark

Akech is hoping to pursue an accounting degree next year before trying his luck overseas again. He says he knows better now and will work "a lot harder" to ensure he performs at his best the second time around.

While college scholarships are the highest level members of the Savannah Pride have currently reached, the club is undoubtedly helping South Sudanese-Australians gain traction on the international stage.

“In the next few years, who knows," Chagai said. "Maybe we’ll have an original Savannah Pride kid who makes it to the NBA."