The left-leaning advocacy group wants to take down the federal government's most prominent conservatives.

Earlier this week, a group of people gathered outside former prime minister Tony Abbott's Warringah office in Sydney and put on party hats.

An organiser explained to attending media this was an "early retirement party" for Mr Abbott, as a caricature version of the MP arrived and cut a cake with '25 years of wrecking' written on it.

"Eventually everything must come to an end," the organiser said among chants of "Bye bye Tony, bye bye". 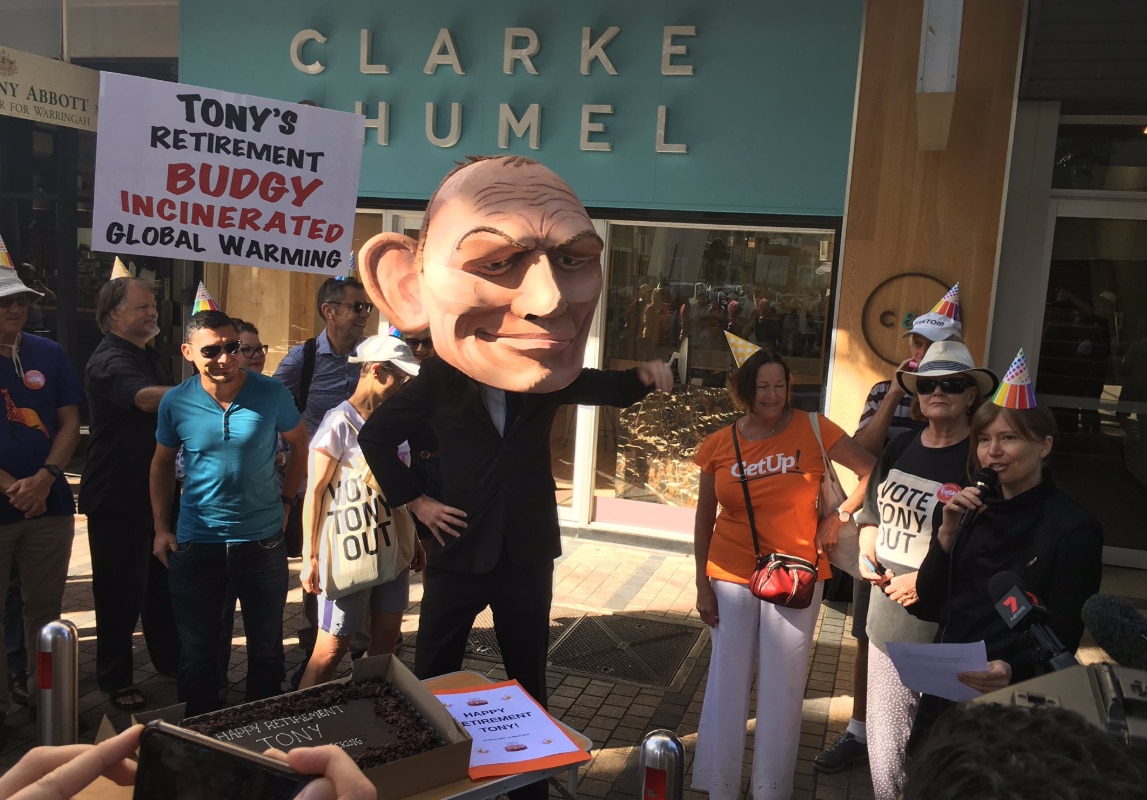 The event was one of many being organised by activist group GetUp around the country before the federal election, due in May.

Those being targeted are a who's who of the Liberal Party's conservative tilt - the likes of Mr Abbott, Home Affairs Minister Peter Dutton and backbencher Kevin Andrews.

And there's reason for them to take notice. GetUp is mobilising a base of more than one million people and could spend more than some political parties on events and advertising.

But what is GetUp and how did it begin?

Calling itself a movement to "build a progressive Australia", GetUp is a lobby group which campaigns for public policy change in fields such as the environment, the economy and human rights.

The organisation was started in 2005 by Australian Harvard alumni Jeremy Heimans and David Madden. Drawing inspiration from US online advocacy groups, they hoped to build a web-based platform which would bolster progressive causes. The original board included Labor leader Bill Shorten, who was then national secretary of the Australian Workers' Union (AWU), and former Liberal leader John Hewson.

"The concept originally was to focus on key policy issues and elevate them in the public debate," Mr Hewson told SBS News.

Early campaigns were built around progressive causes of the time, including returning Guantanamo Bay detainee David Hicks to Australia, increasing funding for the ABC and starting to build the case for marriage equality.

One of its videos on "ending marriage discrimination" has been viewed more than 16 million times.

But over the years GetUp grew from its internet roots to far more ambitious activities; large-scale community organising, major advertising campaigns, and taking aim at individual politicians who is sees as "blocking" social progress.

"More recently they have transitioned into being quite activist, targeting particular seats [at elections]," Mr Hewson said.

Thirteen years since it started, GetUp now stands as a potent force in Australian politics, claiming a "membership base" of one million people. For comparison, the Liberal Party and Labor Party have a combined membership of around 130,000.

And it knows how to make money, taking in more than $11 million dollars via donations in the last year.

With its support of progressive policies and targeting of Coalition MPs, GetUp's critics accuse it of being a being a front for Labor and the Greens.

It's a point that the group's national director Paul Oosting pushes back against.

"GetUp is a proudly progressive and independent organisation," he told SBS News.

The group claims there are zero financial links to the parties, with GetUp material saying "we have never donated, or received a donation, from any political party – ever". 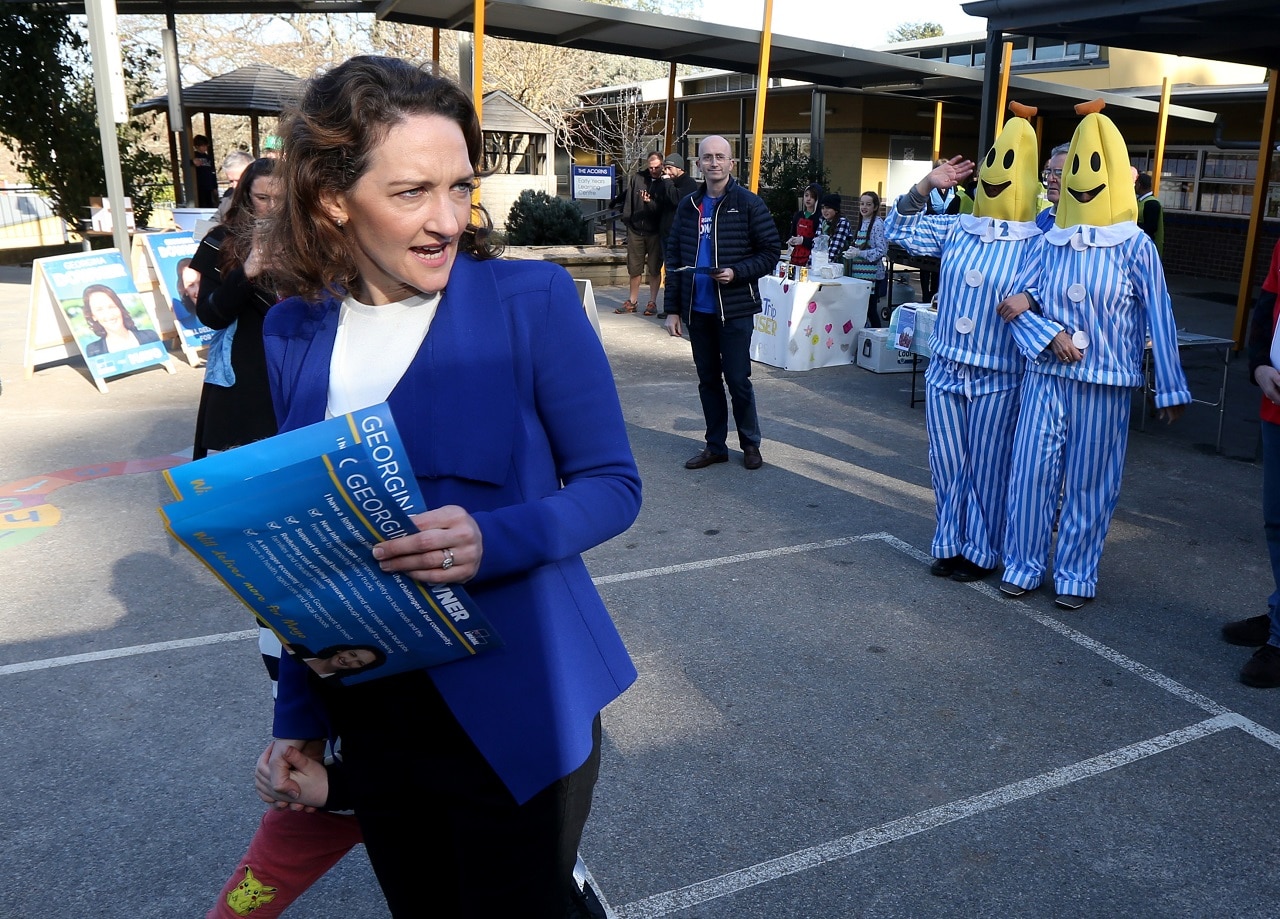 And Mr Oosting cited three decisions by the Australian Election Commission as "proof" of its independence.

The AEC reviewed GetUp's status in 2005, 2010, and most recently this year, concluding each time GetUp was not an "associated entity" of a political party.

This year, the AEC found the fact that an organisation advocates an agenda on one side of the political spectrum does not mean it is "operating" for the benefit of all registered parties on that side of the spectrum.

"We've been cleared by the leading statutory regulator in Australia. That's the court of judgement on this issue," Mr Oosting said. He also said GetUp has at times worked with moderates in the Coalition, such as "literally standing shoulder to shoulder with them" during the 2017 marriage equality postal vote.

"They have run more on Labor and Greens issues [but] they are not a front for anybody," he said.

"A conservative government will always argue that progressive issues are being promoted at their expense."

But critics remain far from convinced.

In a statement provided to SBS News, regular critic of GetUp Senator Eric Abetz called it a "highly partisan extreme left-wing front, established by Bill Shorten and trade union funds, together with foreign support, it continues to attack the Liberal Party and Liberal parliamentarians".

"The AEC's decision following the investigation that they started of their own accord is indicative of the AEC's genuine concerns and the technical nature of the Electoral Act which requires Associated Entities to be directly associated to an individual political party – not just fellow travelling left wing activists." "I celebrate the role of any organisation to play a role in our democracy, but I think GetUp needs to be honest and upfront and not portray itself as a membership-based organisation, when they are a tightly-controlled campaigning company," Mr Morton said.

"They are misleading … This is a company with [a board], rallying against actual democratic membership organisations like the Liberal Party, the Labor Party and the Greens."

The funding behind GetUp has been a source of tension since its early days.

A 2006 donation of $100,000 from Mr Shorten's AWU was controversially investigated last year by the government.

It also accepted a $1.12 million donation from the Construction, Forestry, Mining and Energy Union in 2010.

GetUp has also come under fire from taking money from foreign sources over the years.

In December, The Australian reported it received a $495,000 donation from an Australian-based charity "with foreign funding links".

GetUp confirmed receiving $495,000 from the Sunrise Project but said "all funds" received came from Australian sources.

It also accepted $92,000 from the European Climate Foundation (ECF) just before changes to the foreign donations bill came into play on 1 January.

Under new rules, GetUp and similar organisaions cannot receive any foreign donation above $1,000. And Mr Oosting defended the group's history of taking foreign donations, as "a standard part of the Australian political landscape".

"Up until this year, it's been absolutely the case that political parties, candidates, charities, non-profits, did at times receive funds from overseas," he said.

"In our case, there were times when we were working on global issues, like climate change or World Heritage sites like the Great Barrier Reef, where we've been very proud to receive funding from foundations who take on some of these global issues."

"We don't exist just to advocate on the issues, our members are passionate about actually bringing about change on issues like the climate and a multicultural Australia. We have to be realistic about what it's going to take to make changes and who's standing in the way of progress."

"The reality [is] that voting is the currency of Canberra. Politicians take note of what the voters do."

At the last federal election, the group went as far as designing and printing how to vote cards targeting several politicians.

The effort was seen as partly responsible for cutting Peter Dutton's margin in Dixon from 6.7 per cent to 1.6 per cent. Speaking about the last election, Mr Dutton said, "[GetUp] blatantly lied about health and education funding. They also lie about their fundraising. Most of the money they raise off the back of attacking me is not spent in Dickson, it is spent in NSW and Victoria".

"They should also tell the people of Dickson about their links to the CFMEU and the Greens and that they are in favour of people smugglers getting back into business."

So far for the 2019 election, GetUp announced it will conduct major campaigns in a number of seats - all held by Liberal MPs. These include Warringah (Mr Abbott), Dickson (Mr Dutton), Menzies (Mr Andrews), Flinders (Greg Hunt), Boothby (Nicolle Flint) and Pearce (Christian Porter).

Mr Ooosting disputed the notion that he was running an anti-Liberal campaign, instead saying his group was only targeting the "hard right" members of the party.

"The hard right faction within the Coalition is out of step with the majority of Australians. They are attacking multicultural society, stopping investment in renewable energy and undermining the funding of key public institutions."

Mr Hewson told SBS News, "I think [GetUp] will have a big impact in Abbott's seat" and generally will have a "big influence" on other seats.

"You hear the government complaining about them, so they're obviously quite effective," Mr Hewson said.

Since its inception, there have been several groups on the conservative side of politics who have tried to match GetUp in financial pull and influence.

Most recently is Advance Australia, with campaigns targeting Labor's proposed changes to superannuation and keeping Australia Day on 26 January.

"We Advance Australia when mainstream values are at the core of our way of life. Australia has always been about a fair go. Sadly, our governments aren’t listening and powerful elites and left-wing activists currently dictate our future," material from the group says.

In Warringah, the group has targeted independent Zali Steggall, with advertising linking her to the Labor Party.

Online advertisements are calling Ms Steggall "Bill Shorten's pick for Warringah", a point she has vehemently pushed back against.

But so far no group has managed to get to the scale of GetUp.

"[Conservatives] are not as good as organising these things," Mr Hewson said.

"And there isn't a consistent conservative voice. There are institutions that have an impact, like the Centre for Independent Studies for example, but they aren't of the same scale as GetUp."