School students in Bangladesh are speaking out about the need to protect the planet and reduce emissions.

If some of the more severe projections play out, Bangladesh could be ground zero for the climate crisis.

A sea level rise of half a metre by 2050 would see 12 per cent of Bangladesh's landmass disappear, which would potentially displace 15 million people.

And the impact of a changing planet is already being felt there, with severe floods last year killing 60 people and displacing 800,000 more. The United Nations has warned that one in three Bangladeshi children are now at risk from climate-linked disasters.

It's a point that many young Bangladeshis are acutely aware of. A number of students in the capital Dhaka have joined 'green clubs' that are funded by Australian aid.

In one school, a club is using donations to its 'oxygen bank' to plant a rooftop garden above its classrooms to try and mitigate emissions and slow the impact of global warming.

"The environment is being destroyed. The Himalayas are melting. I feel so upset. The world is becoming warmer," Year 8 student Hridika told SBS News.

"I don't think it can survive much longer. That's why we need to plant more trees, because of carbon dioxide."

Dhaka is home to 21 million people, with 1,000 more new residents arriving every day.

A staggering 82 per cent of the city is now concrete, with just six square kilometres of open space across the entire city.

In this context, Year 9 student Zilani said even a few trees can make a difference. 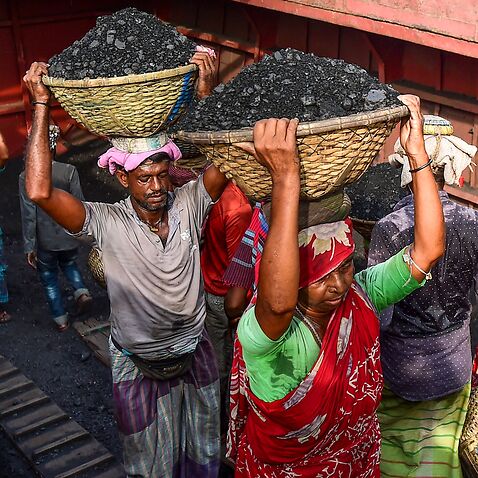 "Our role is to plant more and more trees. We need to make our country, and the whole world, much greener. We need to control the use of carbon," he told SBS News.

The students had a message for the leaders of nations where emissions are rising not falling. Some of the trees planted by the green club.
Brett Mason

While Hridika said she was inspired by another young climate campaigner.

"I salute Greta Thunberg, many times. She is only my age but has done an amazing job bringing young people together."