July's fatal floods across western Europe sparked calls for tougher action to combat climate change, but not all survivors are convinced of the cause. 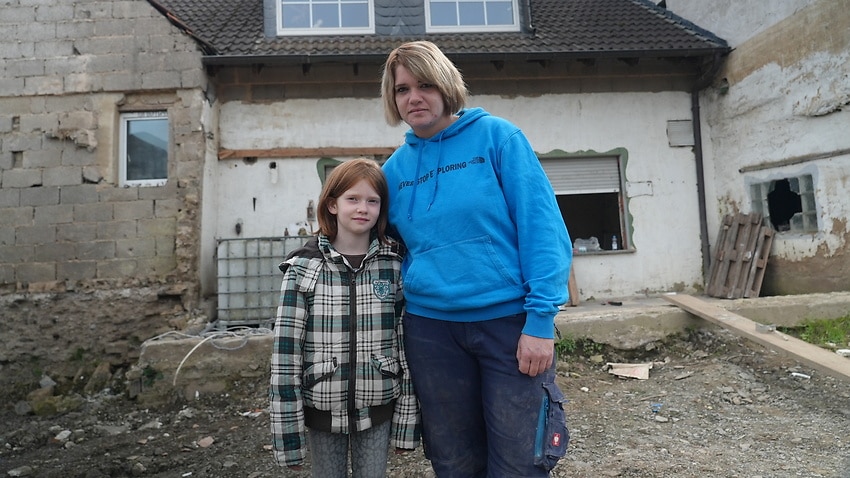 Julia Henrichs and her daughter outside her father's property in Schuld. Source: Ben Lewis/SBS News

Waltraud Groten doesn’t need to read scientific reports to understand the effects of climate change - she can see them from her back doorstep.

Her home on the outskirts of Erftstadt is close to an enormous gravel quarry. Perilously close, it turned out.

July’s torrential rain and the floods that followed caused the quarry walls to collapse, triggering a landslide that swallowed up buildings and roads.

Waltraud’s home was just a few metres away from toppling into the waters.

Waltraud Groten in her backyard, near the Erftstadt sinkhole. Source: Ben Lewis/SBS News

While emergency works have now removed the immediate threat to the property, it’s the long-term threat posed by climate change she remains concerned about.

“I think that the rain that originally caused this was no accident,” Waltraud tells SBS News.

The floods, which killed more than 180 people, changed the political conversation in Germany.

Climate change became a top issue in the recent election, with all major parties pledging to make bolder climate commitments. The Greens will almost certainly be part of the next coalition government.

Waltraud believes that for too long, Germans were focused on environmental vandalism elsewhere, ignoring issues at home.

“We are upset about other countries where forests are being cut down, but it’s not much better here,” she says.

The sinkhole in the Blessem district of Erftstadt on 16 July 2021. Source: AFP

For now, Waltraud’s top priority is repairing her home. But she’ll be paying attention to what world leaders do in Glasgow at the upcoming COP26 global climate change summit.

“They have to. I don’t know if it will soon be too late. But they can still do something,” she muses.

“Will it get better? Maybe I won't see it, but my children will. I hope so.”

Julia Henrichs and her daughter outside her father's property in Schuld. Source: Ben Lewis/SBS News

The watermark on the side of Julia Henrichs’ family home is well above the second floor.

Like many in the small village of Schuld, she and her children had to shelter on the roof when the flooding began.

Standing outside what’s left of the house, she becomes emotional remembering the terror of that night.

“There was a huge closet in the living room, the water pushed it over and my father was right underneath it. I pulled him out and told him to go to the roof,” she recalls.

It was a terrifying night.

“I couldn't sleep, but my children slept. I kept looking back into the hallway to see how many steps were still there, still above the water.”

The town of Schuld, Germany. Some buildings were swept away, others had to be bulldozed once waters receded. Source: Ben Lewis/SBS News

Schuld has experienced catastrophic flooding before. In 1901, 50 villagers were killed when the River Ahr burst its banks.

Many residents are somewhat sceptical that climate change has made rainfall worse.

Julia is one of them.

“I remember thunderstorms from the past. I also know those today and they are usually more extreme in contrast to before, but is it really due to climate change? I don't know.”

As the co-leader of the World Weather Attribution project, Dr Friederike Otto wants to remove any uncertainty surrounding the relationship between global warming and extreme weather events.

Her job is to help answer the question asked after most natural disasters- was climate change responsible?

As emergency crews went to work in Germany, repairing bridges and cleaning debris, so did Dr Otto and a team of climate scientists.

They were comparing present-day and historic meteorological data and using computer modelling to calculate the impact the rise in global temperatures had on the floods.

Their study found the extreme rainfall which led to the flooding, while still rare, was between 1.2 and 9 times more likely because of human-caused global warming.

They also found that climate change has increased the intensity of daily extreme downpours in the region by 3 to 19 per cent.

It was an example of "rapid attribution science".

Produced before traditional peer review, it was published within weeks, rather than the usual months or years. The analysis was able to be reported before the flood story fell out of the news cycle.

“To connect our experiences of weather and what’s happening around us with what we know about climate change is important to make us understand more than just intellectually what climate change means.”

Cornelia Schlosser in what was once the basement of her family's bakery in Schuld. Source: Ben Lewis/SBS News

Many buildings in Schuld could not be saved. It will take years to rebuild this village.

“We had total loss. Our bakery is completely gone, the inventory completely gone. Our house no longer stands. We were insured, thank God,” she says, while surveying the ruins of her property.

She remains somewhat sceptical that global warming increased the intensity of the rainfall, but accepts it won’t be the last time deadly floods occur in this region, where communities are often at the bottom of steep valleys.

“Everything we have is taken from nature. Nature gives it to us and nature takes it.”