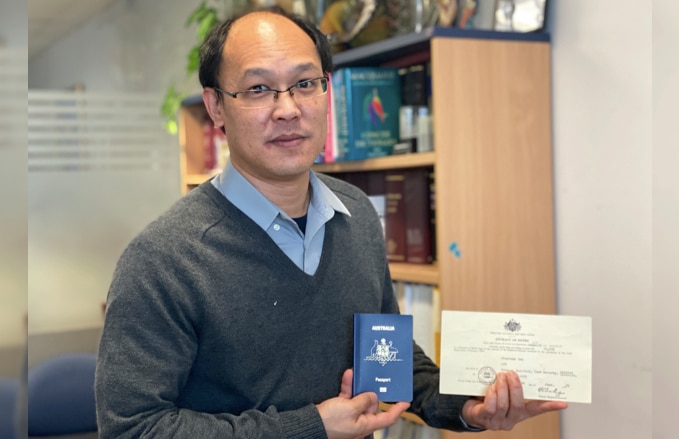 When Troy went to renew his Australian passport he was told he wasn't a citizen. This is what happened next

EXCLUSIVE: After a near five-year battle, Australian citizen Troy Lee has won a landmark legal case against the Department of Home Affairs and is now hoping for a seven-figure payout. This is how he went from doing a routine passport renewal to being threatened with statelessness and detention.

Almost five years ago Troyrone (Troy) Zen Lee did what thousands of Australians do every day; applied to renew his passport.

What he did not expect was to be told he was not Australian.

The department said he stopped being Australian when PNG gained independence from Australia in September 1975. But Troy was born in PNG's capital Port Moresby a few months before that, in the May, meaning he automatically gained Australian citizenship.

A letter from then immigration minister Peter Dutton in 2017 confirmed the department’s position; that Troy - who had held an Australian passport for decades - was Papua New Guinean.

“I was shocked. Shocked. Never ever did I imagine this,” Troy, 46, told SBS News.

Troy grew up and studied in Brisbane. He had been working overseas and was visiting Australia in 2016 when he decided to renew his Australian passport.

“I was just a regular guy living with my wife and son in a small apartment, working in Taiwan,” he said.

Then he got the news.

“It’s one of the most frustrating, uncertain periods in your life. You’re basically nobody. Who deserves this? Why?

It’s one of the most frustrating, uncertain periods in your life. You’re basically nobody.

The full bench of the Federal Court has now ruled Troy is Australian and that the minister and department made “mistakes”.

But those mistakes cost Troy his job in Taiwan as he stayed in Australia to fight the case, prevented him from seeing his wife and child who remained overseas, and caused him mental health issues.

As a result, the court has recommended the Commonwealth now makes a rare 'act of grace payment' for the suffering and hardship he endured over those years.

It is unknown how much that amount could be, but Troy is hoping for a seven-figure sum.

Possibly thousands of other Australians born before 1975 in what was then the Territory of Papua could have been caught up in a web of legislative and procedural changes over the years.

Many have faced claims by the Commonwealth that their passports and citizenship certificates were incorrectly issued for up to four decades.

In 2016, Troy applied to renew his passport and return to his highly-specialised engineering job working with Mitsubishi on fast trains in Taiwan, an industry that does not exist in Australia.

At first, he thought the department had made a “simple mistake”.

But despite presenting original copies of his birth certificate and registration with the Australian Government, the department refused to back down.

With the assistance of his lawyer Michael Chan, he contacted the PNG government.

It was there they discovered the department had not checked Troy's case with PNG authorities.

“They hadn’t even bothered. That was mentioned by the judges,” his lawyer said.

They hadn’t even bothered [to check with PNG authorities].

Troy’s case came as Australia’s parliament was thrown into turmoil in 2017, with 15 MPs found constitutionally ineligible to hold their seats due to dual citizenship. During that crisis, a letter presented by an MP from a consulate was enough to prove or disprove foreign citizenship - but not in Troy’s case.

“The PNG consulate came back to me with a letter saying I’m not a citizen. That’s the voice of a foreign government. They ignored it,” he said.

It raised the prospect the department could then make Troy stateless.

The letter confirming Mr Lee is not a PNG citizen. Source: Supplied

“So where does he go? He becomes in effect stateless based on their actions, and you’re not supposed to make a person stateless,” his lawyer said.

“There are international conventions Australia has signed up to, but they didn’t seem to care about that.”

During early negotiations with the department, relations soon soured.

“They even called me up to say I had to be put into detention, for some reason,” Troy said.

They even called me up to say I had to be put into detention, for some reason.

“It’s just common sense; if you throw an Australian citizen into detention for no reason, that’s a fundamental human rights issue.”

That issue was previously addressed 16 years ago by the Palmer Inquiry into the immigration detention and deportation of about 200 Australian citizens, including Cornelia Rau and Vivian Solon Alvarez.

The then immigration minister, Liberal senator Amanda Vanstone, announced $50 million for training for staff in what was then the Department of Immigration to usher in a culture change.

Under the Australian law that granted PNG independence and the new PNG constitution, a person who was born in the territory and had two grandparents from there automatically became a PNG citizen and lost all Australian rights.

There were exemptions though, including for naturalised Australians, like Troy’s parents.

But Troy's case proved the odd one out.

“Going to court was a fundamental step I needed to take to get out of the immigration department’s system because it was just going around in circles,” he said.

With citizenship law specialist Professor Kim Rubenstein on his legal team, Troy took successive ministers and the department to court.

Not allowed to work, he began digging for historical material in the Queensland University Library to support his case.

“I read archive material where the department has always helped people recover their citizenship. There was a culture of helping Australians,” he said.

“There’s something that’s changed in the mindset of the department.”

'Exclusion rather than inclusion'

Professor Rubenstein worked on the immigration department’s review and drafting of the Australian Citizenship Act 2007. She said “extremely serious” mistakes were made in Troy’s case.

“Someone within that department reinterpreted … and effectively said that just because someone's parents were Australian citizens by naturalisation, did not necessarily mean that they had a right of residence in Australia,” she said.

Read More
Taryn was deported from Australia with $300 and a bag of clothes. Now, she's taking on the government

“We’re seeing more and more decisions where the department arrives on the side of exclusion rather than inclusion, and that is not consistent with the objectives of the act.”

After the Federal Court ruled Troy was in fact an Australian citizen in 2019, The Department of Home Affairs appealed. It still claimed he was an “immigrant” and should not have the Australian citizenship he had held for more than 40 years.

Three judges, in a unanimous decision in May this year, then dismissed the appeal.

“The discriminatory privilege of access to Australian citizenship by naturalisation enjoyed by, materially, ethnic Chinese residents of the Territory of Papua was well understood at the time … [by] competent authorities,” they said.

“There is no evidence at all that either the minister of those advising him in his department ever acted in bad faith," they added, "only that they were mistaken”.

They recommended the government make an act of grace payment due to Troy's “emotive and economic loss”.

His whole life has been turned upside down by the department.

The department did not lodge an appeal to the High Court by the deadline last month, so the judgement stands.

“Hopefully this government will take notice [but] I don’t think the minister will apologise, nor will the department,” Troy's lawyer said.

“They should make an ex gratia payment to him. Basically, his whole life has been turned upside down by the department.

Professor Rubenstein has fought with the department over numerous citizenship cases and says this was a “significant” judgement.

“This is a vindication for the approach we have been advocating for a number of years,” she said.

“The court decision becomes the legal precedent, the law interpreting that aspect of Australian citizenship for those born in Papua pre-independence, and the department should be notifying the outcome to those individuals whose cases they are reviewing,” she said.

Troy believes he deserves the act of grace payment.

“I haven’t had an income since 2017, I didn’t have work rights, my family was running out of money, I had a mortgage to pay. I’ve been denied the fundamental right to support my family,” he said.

SBS News asked the Department of Home Affairs if it accepted the judgement, what changes it would make to citizenship review procedures, why it did not check Troy's case with the PNG government, the number of similar cases it knew of, if it would support an act of grace payment, and if Troy would receive an apology.

In its response, a spokesperson said the Immigration Minister Alex Hawke “is currently considering the implications of the judgment. Accordingly, it would not be appropriate to comment further”.

The experience has shaken Troy’s faith in the department.

"I feel Australian and I’m very proud to be Australian," he said. "[But] how do I, how does anybody trust the department?"

"And then it got me thinking, how many of these cases have they got wrong?"

Now Troy has his Australian passport back, he just wants to go to Taiwan to see his family.

“All of this just because of a blue book,” he said.

“I didn’t really feel much emotion, I just want to move on. I feel relieved, now with this court decision, it will never come back.

“I hope this never happens to anybody again. Nobody should have to go through that. You’d think there was some compassion from the department? No.”

Do you know more about this story or would you like to share your story with SBS News? Email stefan.armbruster@sbs.com.au