Millions of displaced Syrians are looking for a place to be resettled, while countries around the world continue to reject them.

On Holocaust Memorial Day 2017 and amid the world’s greatest refugee crisis since World War II, Donald Trump imposed a four-month suspension of all refugee admissions into the US and indefinitely banned entry to all Syrian refugees.

The president’s executive order suspends the US’s entire refugee resettlement programme – the largest in the world – for 120 days, and places a temporary 90-day ban on people from Syria, Somalia, Iraq, Iran, Libya, Sudan, and Yemen.

Amid personal heart-break and tragedy for the people and families affected, mass protests have ignited to the “Muslim travel ban” and to the end of the refugee resettlement programme. But what impact will the suspension have on countries currently hosting large refugee populations?

For Turkey, currently hosting 2.8m Syrians and more than 290,000 asylum-seekers and refugees from countries such as Afghanistan, Iraq and Iran, the US refugee resettlement programme means a great deal.

As a proportion of the whole refugee population in Turkey, the numbers resettled to other countries are small. Numbers for 2016 from the UNHCR are incomplete, but the 8,500 refugees resettled from Turkey to the US within 2016 account for about a tenth of the 84,995 US resettlement places between September 2015 and September 2016.

But resettlement from Turkey matters because while party to the 1951 Refugee Convention, in Turkey refugees are only admitted into a temporary protection system. While there is no limit on how long they can stay, they can’t move onto other more permanent forms of residency or citizenship which guarantee more rights.

Refugees have limited rights to education, welfare and employment. Most live in challenging, poverty-stricken circumstances. Child and forced labour is reportedly endemic. It was the inability to live safely and securely in Turkey, which led many of the 800,000 women, men and children to risk their lives crossing the Aegean Sea to Greece during the crisis in 2015-2016.

It is also true that refugee resettlement in Turkey has been far from perfect. Variable interpretation of eligibility criteria by the different embassies which UNHCR refers refugees to has rendered the process opaque to refugees and observers alike. The intense vetting conducted by US security agencies of those applying for resettlement has significantly slowed the process in recent years. Lengthy processing and waiting times can lead to enormous stress among those seeking to be resettled. In 2015, 15,466 refugees were referred for resettlement to the US, but only 4,833 departed. 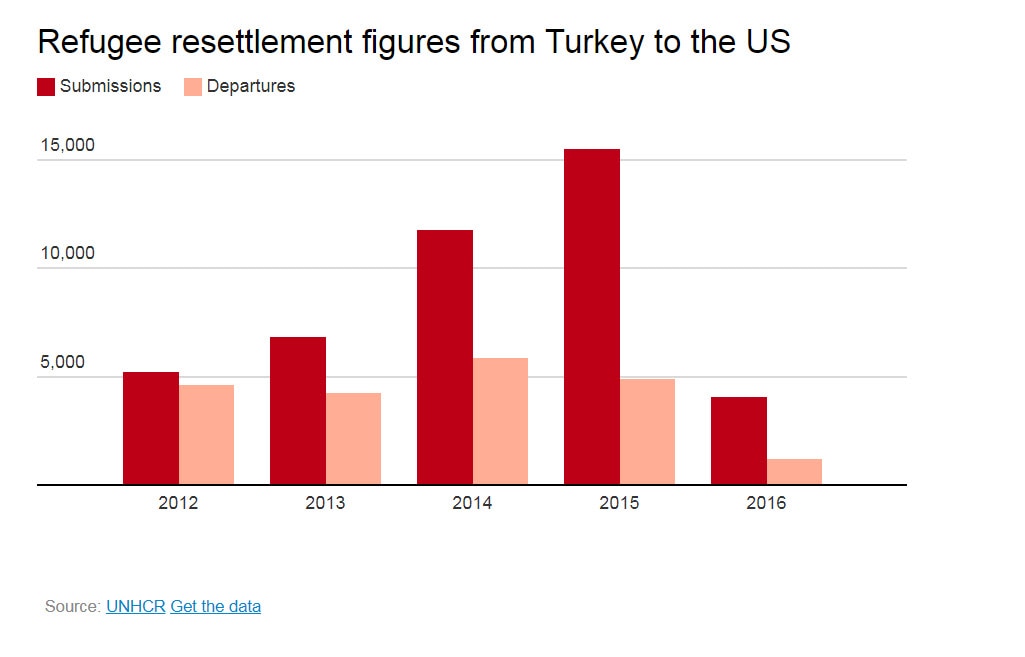 Refugee resettlement figures from Turkey to the US.
UNHCR

Despite this, in Turkey, resettlement is integral to refugee protection. For those who will be unable to return to their homes in the foreseeable future, the end of the US resettlement programme is a significant and symbolic blow.

The Turkish government gave a muted response. Prime Minister Binali Yıldırım argued that it was too early to evaluate the measures. Like Trump, Recep Tayyip Erdoğan’s government has also been accused of using refugee resettlement as a political tool.

Refugees were the central bargaining tool in the March 2016 EU-Turkey Agreement, where Turkey agreed to receive migrants and refugees who had crossed the Mediterranean from its shores, and for every Syrian returned to Turkey, another Syrian would be resettled to the EU. In September 2016, Turkish authorities prevented the resettlement of 1,000 Syrian refugees to the US and other countries claiming that resettlement countries, including the US, were “cherry-picking” based on skills and education levels rather than based on vulnerability. Trump’s decision means that refugee resettlement from Turkey is likely to become further politicised.

Other countries, notably Jordan and Lebanon, that are also hosting large numbers of refugees will also likely be affected by Trump’s move.

It’s difficult to know what the future holds for those waiting to be resettled. Canada’s prime minister, Justin Trudeau, has already agreed to take those not allowed into the US as a result of Trump’s move. But this is not ideal, especially for those who had been waiting, some for many years, to join family members already living in the US and from whom they will continue to be separated.

Nor is it possible to yet know what is in store for the future – if there is one – of the US resettlement programme or those of other countries. UNHCR’s initial response was relatively cautious, no doubt with an eye to the 40% of its income which it receives from the US government. However, on January 30, human rights chief Zeid Ra'ad al Hussein called the travel ban illegal.

Global political responses have been muted, with the government of Australia even offering Trump cautious support. And the British prime minister, Theresa May, recently returned from official visits to the US and to Turkey, failed to condemn the new policy.

As a proportion of the 21.3m forcibly displaced worldwide, the numbers resettled have always been small in comparison to the those currently in need of resettlement programmes. Even without Trump’s action, global demand for resettlement places – expected by UNHCR to be 1.19m by the end of 2017 – greatly outstrips supply.

What is clear though is that Trump’s action is hugely symbolic and will resonate globally for years to come. Historically, the US has led the world with its resettlement programmes and where it leads, others are likely to follow.

Challenging Trump on his decision to end the refugee resettlement programme is therefore both vital and urgent. Robbed of a Homeland Growing up in the shadow of Syria