Nearly 400,000 civilians remain inside the sprawling urban ruins of Eastern Ghouta, Syria's rebel-held stronghold, according to the United Nations.

The suburb is only 15 kilometres east of Damascus but has been the scene of intense fighting since 2013. Rebel fighters with Failaq al-Rahman during clashes with government forces in the suburbs of the Syrian capital Damascus.
AAP

Will Todman, Associate Fellow at the Centre for Strategic and International Studies, told SBS News Syrian government forces have been amassing on the edges of Eastern Ghouta for the past couple of weeks, and are now poised to launch a ground offensive against the various rebel groups in the area.

#Syria - #REACH is mapping the severity of damage to structures in Eastern Ghouta and has recently released detailed maps of several Eastern Ghouta areas. Please find all new maps and an article on the Eastern Ghouta situation at the following link ► https://t.co/qhBDTjBZEH pic.twitter.com/npOds5ksfc

A victory would be a major development for Syrian President Bashar al-Assad in the seven-year war.

Who are the rebel groups?

The Syrian government considers all the rebel groups operating inside Eastern Ghouta as terrorists.

Elizabeth Tsurkov is a Research Fellow, focusing on Syria, at the Forum for Regional Thinking and said there are three rebel groups with a significant presence in Eastern Ghouta but each has different goals, ideologies and affiliations.

"It is absolutely important that these rebel groups are not painted with one brush stroke," Ms Tsurkov said.

The two major rebel groups are Jaysh al-Islam and Faylaq al-Rahman, while Hay'at Tahrir al-Sham maintains a smaller presence in the area. 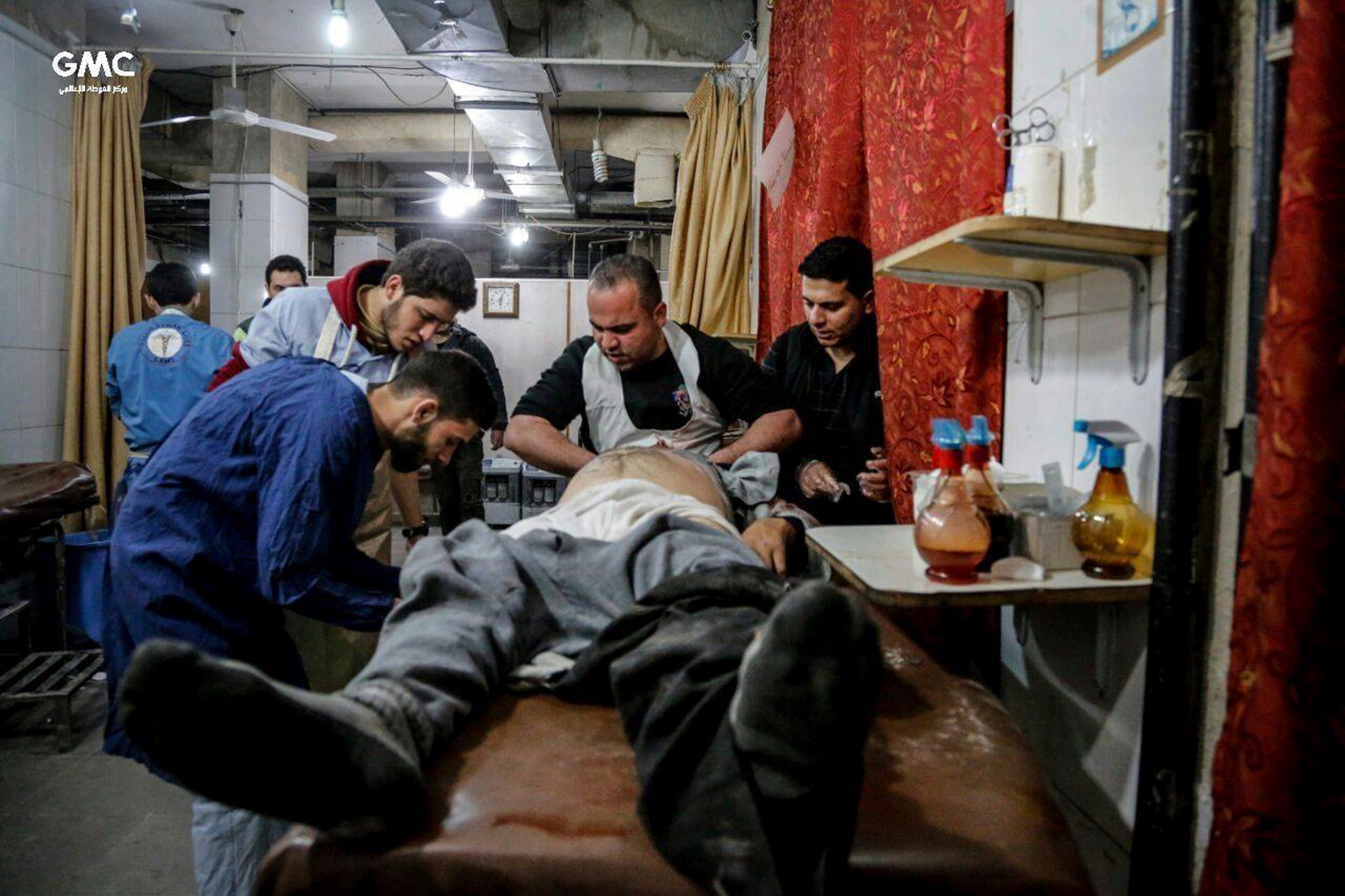 Syrian paramedics treat an injured man who was wounded by the shelling of the Syrian government forces, at a makeshift hospital, in Ghouta.
Ghouta Media Center

Jay Al-Islam or Army of Islam is the largest rebel faction in Eastern Ghouta.

According to Stanford University's Mapping Militant Organisations, the group was formed in 2013 through a merger of dozens of Damascus-based opposition groups.  They control networks of tunnels that once connected Eastern Ghouta to Damascus. The group wants to replace President Assad’s regime with a Syrian society based on Islamic law.

"They are presumed to be the largest rebel group with several thousands of fighters, possibly over 10,000 fighters," Ms Tsurkov said.

Associate Fellow Will Todman said the group controls the eastern and southern parts of Eastern Ghouta, including the city of Douma.

The Stanford University project reports the group has ties to Saudi Arabia, which helped establish it "in an attempt to counter the influence of Al Qaeda and its affiliates." There are also believed to be ties with the Turkish government. 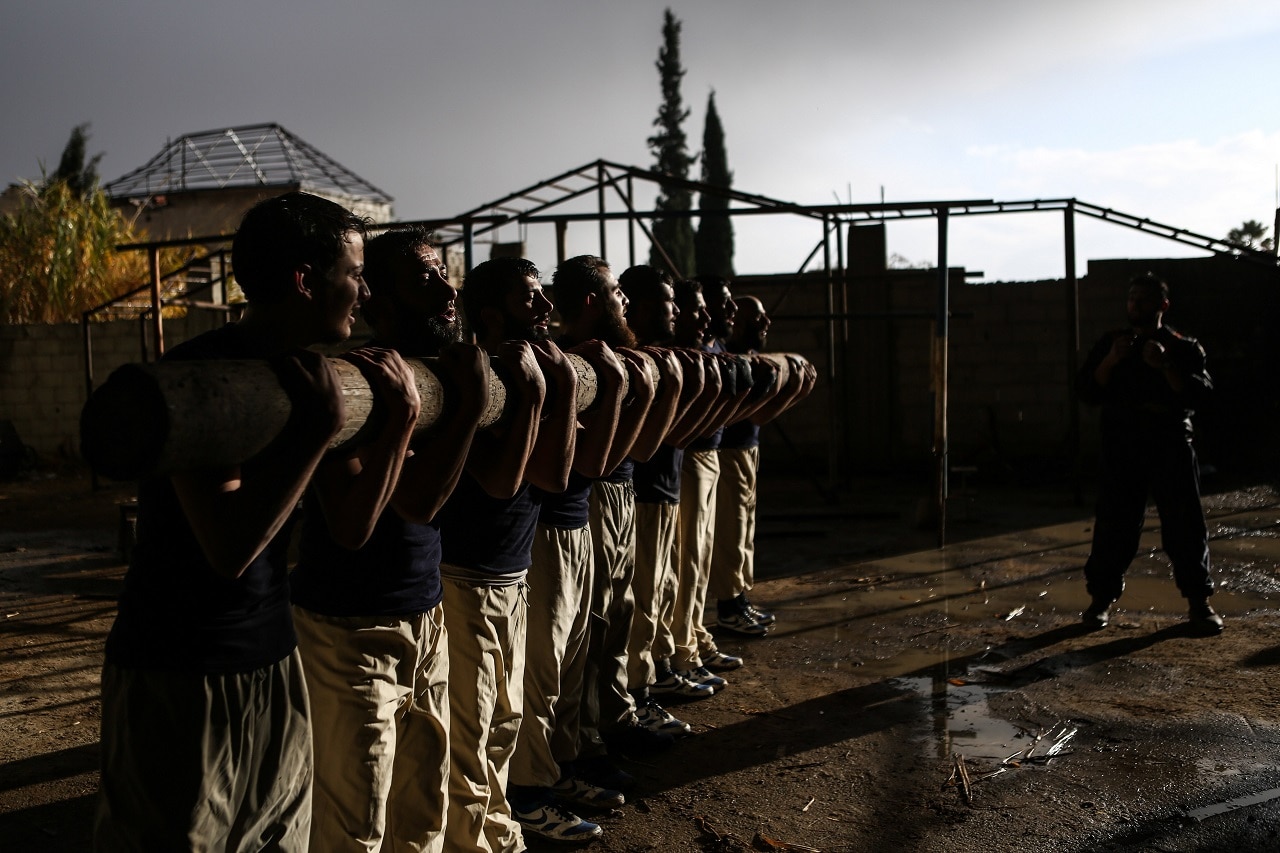 Faylaq al-Rahman is the second largest rebel group located in Eastern Ghouta and is allied with the Free Syrian Army, one of the biggest insurgent coalitions formed at the beginning of the Syrian civil war in 2011.

Jaysh al-Islam and Faylaq al-Rahman have essentially divided the territory of Eastern Ghouta among themselves, and control the western and southern parts of the suburb. Mr Todman said the aforementioned rebel groups are  bitter rivals and engaged in fierce fighting last year.

It has several hundred fighters in Eastern Ghouta and controls some towns inside the area.

Ms Tsurkov said the rebel group has since rebranded and cut ties with its former Islamic militant affiliate.

"They are the third smallest faction, and they are not a significant player in this region," Ms Tsurkov said.

However, according to Mr Todman the rebel group continues to be inspired by Al-Qaeda and is staunchly anti-western.

He said the rebel group has a tacit alliance with Faylaq al-Rahman against Jaysh al-Islam. 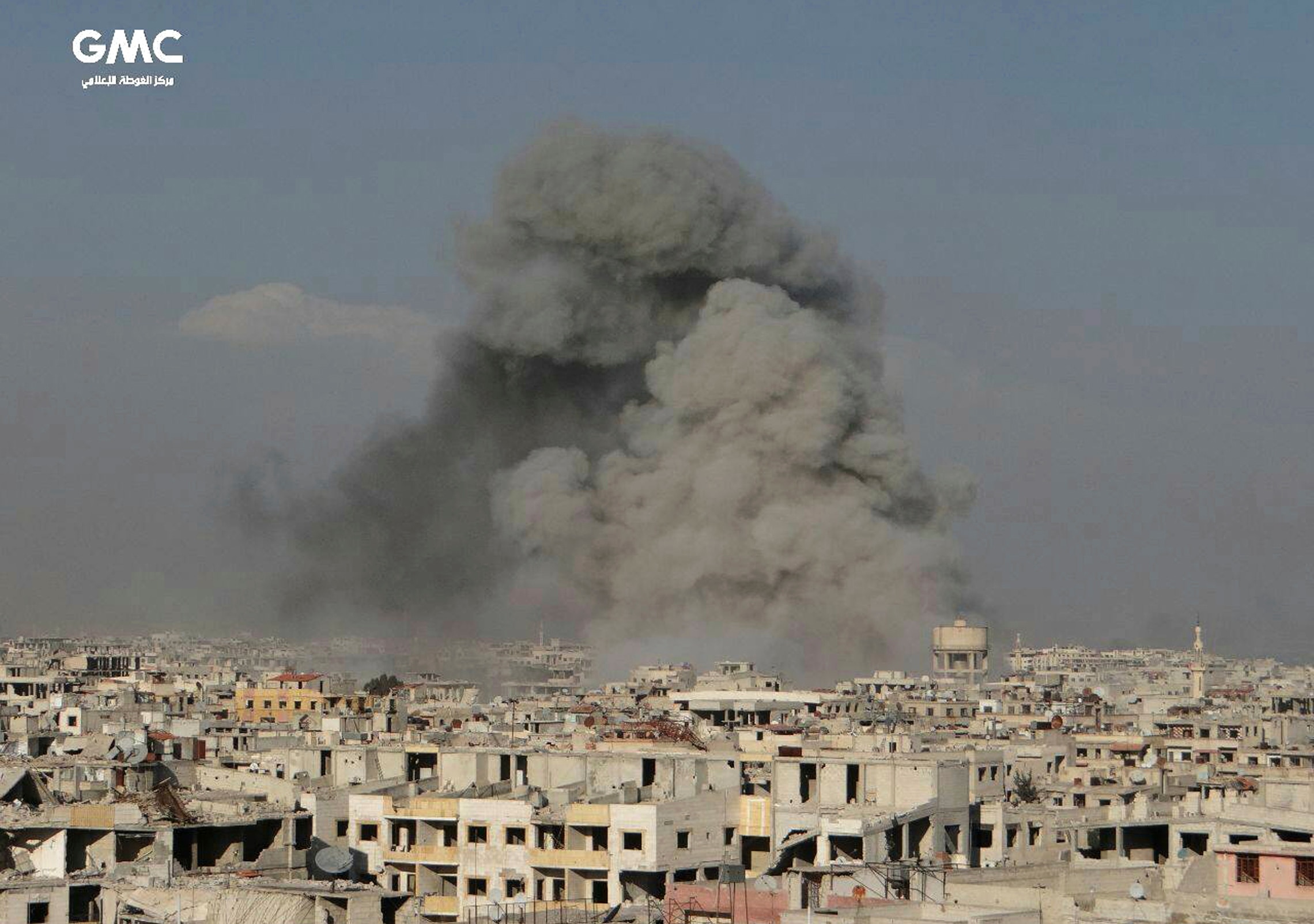 Alleged use of hostages

In 2015 Human Rights Watch alleged armed groups were endangering civilians, including women, and detaining soldiers by placing them in metal cages throughout Eastern Ghouta.  Footage emerged from a local opposition outlet, said to show trucks transporting cages, each containing between four to eight men or women.

Rebel groups have no way of achieving their goals

The United Nations Security Council moved to enforce a 30-day ceasefire in the region on February 24, while France and Germany have made pressing appeals for Russian President Vladimir Putin to demand President Bashar al-Assad enforce a ceasefire.

The Syrian regime's attacks on Eastern Ghouta have left 1,400 people dead, including 426 children, according to the latest UN figures.

Ms Tsurkov said the rebel groups see their role as defending the region against an authoritarian government.

"They (the rebel groups) have no way to leave Eastern Ghouta, unless they find a way to reach some kind of deal with the regime," she said.

Who are these rebel fighters?

Ms Tsurkov said the rebel groups are mostly made up of young men who are ideologically aligned and have joined to fight against President Bashar al-Assad's regime.

The Research Fellow said the fighters sometimes sign up to rebel groups because members of their families have already joined, or for financial reasons.

"The groups are able to provide their fighters with a salary and sometimes food," Ms Tsurkov said. 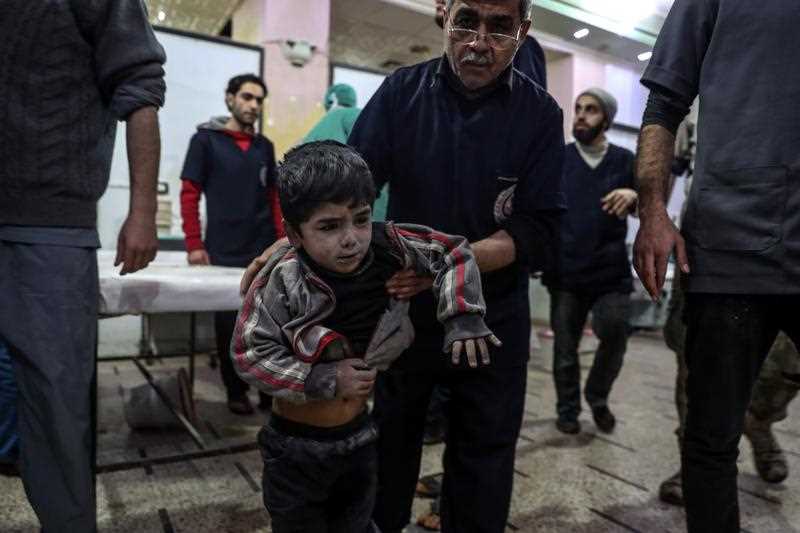 An injured child receives treatment, after getting injured in an alleged bombing by forces loyal to the Syrian government, rebels-held Douma
AAP

The Russia and Syria alliance

Russia intervened directly in the Syrian civil war in 2015 stating that it would fight terrorists, especially the Islamic State (IS) group.

While Ms Tsurkov said Russia and Syria want to defeat the rebel groups in Eastern Ghouta to eliminate any alternative form of control in the region.

"The Russian regime has largely succeeded in its goal of stopping another group putting itself as an alternative to the Assad government,” she said.

The rebel groups have been under intense bombing from Syrian government forces this month.

Ms Tsurkov highlighted how the rebel groups have continued to fight with each other, despite sharing a common enemy in President Bashar al-Assad’s regime.

“This infighting and lack of coordination is something that has made civilians and activists in the area very angry,” she said.

Ms Tsurkov said none of these rebel groups has explained clearly how they would operate if they ever gained control of Syria. 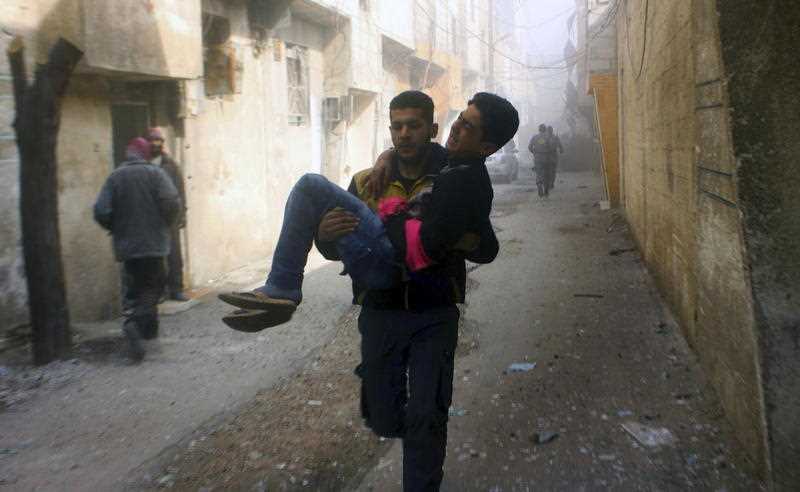 Caught in the crossfire

On Monday Russia called a daily "humanitarian pause" in Syria's Eastern Ghouta, bowing to international pressure to halt the carnage in the rebel-held enclave.

Prior to the ceasefire, aid groups had been barred from helping civilians in the area and blockaded by Syrian government forces.

Ms Tsurkov said civilians in Eastern Ghouta have run out of options.

"They are expecting to be bombed heavily, and then advanced on by Syrian forces, after which the rebel forces will surrender," she said.

The Research Fellow said seven years ago a peaceful uprising started in Syria where people, including in Eastern Ghouta, rose up against the regime: "They demanded freedom, they demanded basic rights and now none of the options before them provide any avenue to achieving those goals." 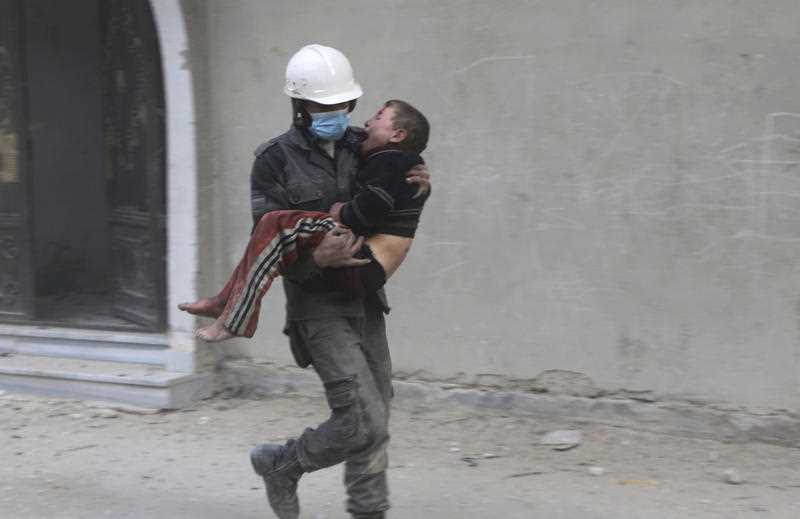