The law would restrict the publication of photos or videos taken of police officers' faces while in action.

Thousands of people marched in French cities Saturday to protest a draft law that would place limits on the filming of on-duty police officers, a move condemned as a curb on press freedom.

The biggest gathering of around 7,000 was near the Eiffel Tower in Paris and was closely watched by police, who engaged in minor skirmishes with a small group of protesters after the rally was over. Thousands of people in France have gathered to protest the bill.
NurPhoto

In addition to representatives of the media, others included members of the "Yellow Vest" and "Extinction Rebellion" movements, along with individuals waving flags of the communist and green parties, and the FO trade union.

A banner deployed by the news agency Mediapart in Paris declared that "Democracy dies in obscurity".

What is the bill?

Late Friday, parliament approved an amended "comprehensive security" law which would criminalise the publication of images of on duty police officers with the intent of harming their "physical or psychological integrity".

In practice, the law would restrict the publication of photos or videos taken of police officers' faces while in action.

In many cases an officer's face would have to be blurred.

Article 24 of the draft law foresees a one-year prison term and a $AU73,060 fine for spreading images that show officers faces or allow them to be identified when such images harm their "physical or psychological integrity". 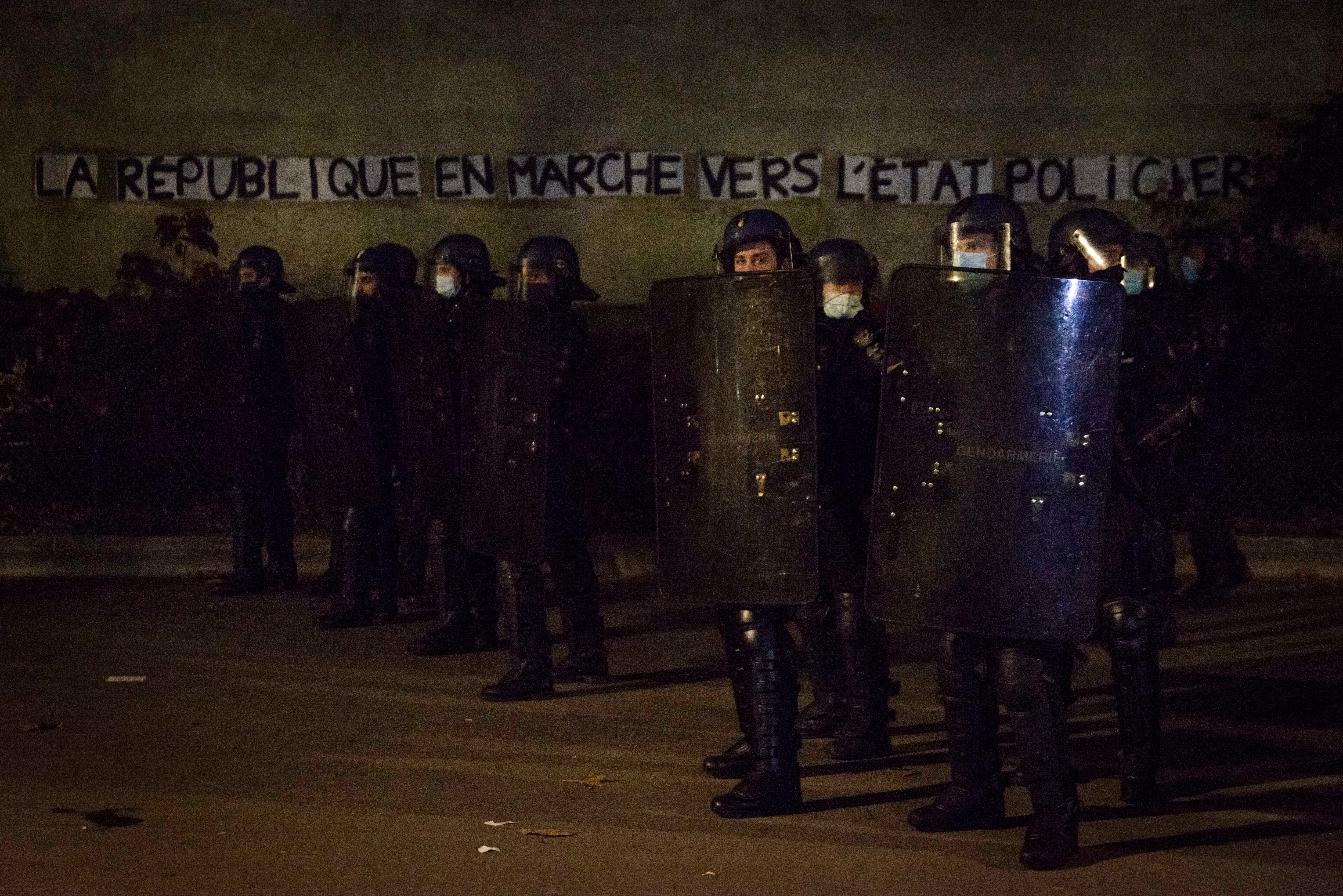 Why is the bill causing controversy?

Journalist unions say the bill could give police a green light to prevent them from doing their work and potentially documenting abuses by security forces.

An amendment clarifies that press freedom should in no way be hindered by the proposed measures.

French media are also concerned about potential rights abuse via the use of drones to watch demonstrations and facial recognition programmes linked to surveillance cameras.

French police have been taken to task in recent years for alleged brutality meted out to protesters and criminal suspects, especially those from black, Arab or other minorities. 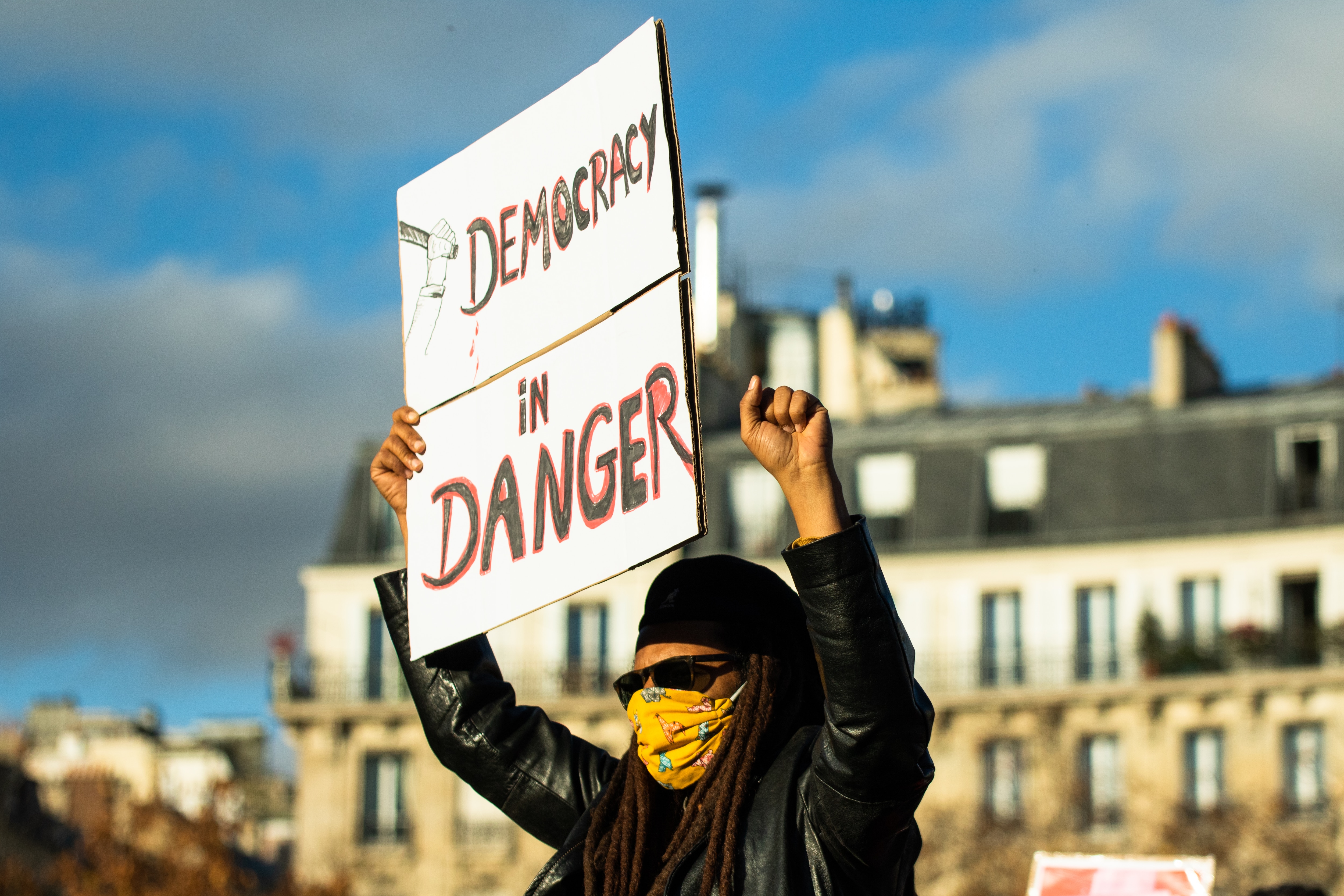 Journalist unions say the bill could give police a green light to prevent them from doing their work.
NurPhoto

Reporters without Borders, Amnesty International France, the Human Rights League, journalists’ unions and other groups encouraged people to attend the protest. The crowd included many journalists and students.

“We are not here to defend a privilege of our profession, press freedom and journalists’ freedom,” Edwy Plenel, co-founder and editor of investigative website Mediapart, said. “We are here to defend fundamental rights, the rights of all people.”

In the northern city of Lille, a demonstrator carried an English-language sign that said "Orwell was right" in a reference to the dystopian novel "1984".

Rallies were also held in the Brittany city of Rennes, and in Marseille and Montpellier on the Mediterranean coast, where some chanted: "Put down your arms and we'll put down our telephones."

Social media campaigns that expose individual officers are targets of the proposed legislation.

What do authorities say?

Prime Minister Jean Castex said the bill would “remove any ambiguity on the intention to guarantee respect for public freedoms while better protecting those, police and gendarmes, who ensure the protection of the population”.

Police said they risk great personal threat in the line of duty, and dozens have been injured in clashes with protesters in recent years.

An attack on a police station outside Paris last month by dozens of people armed with fireworks and steel bars spurred the government into taking measures. 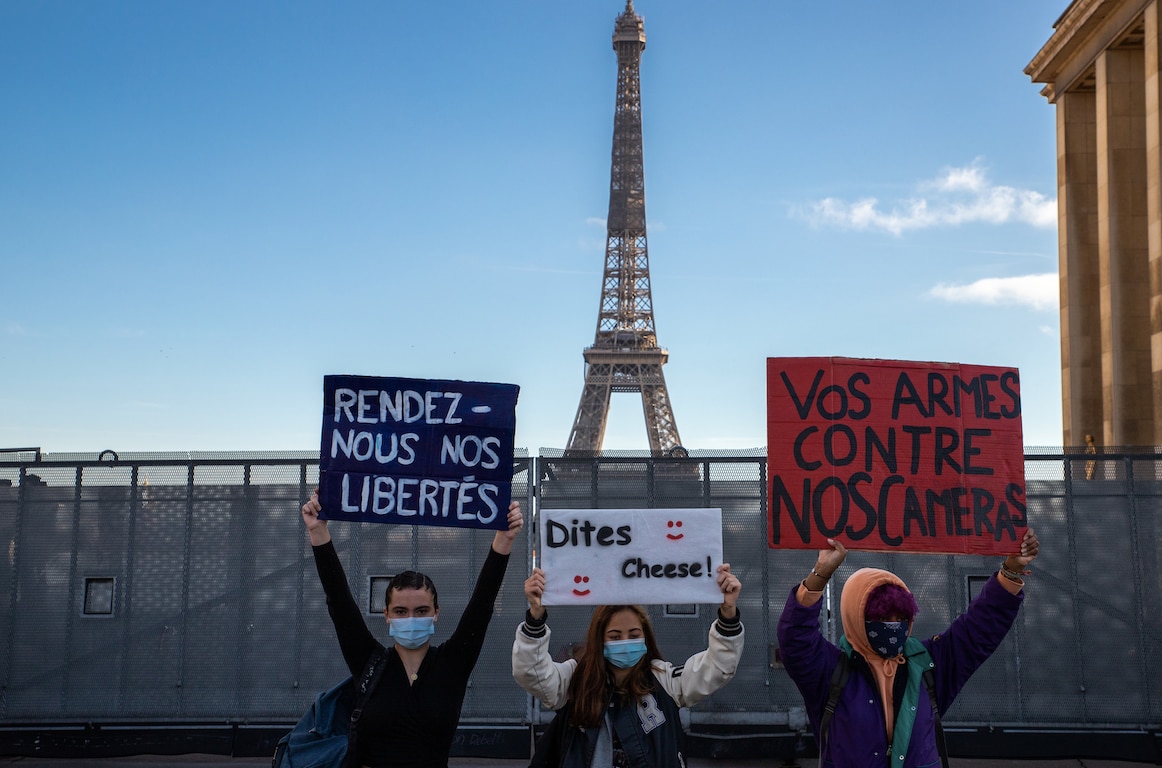 The bill must now go to the Senate for further debate before it becomes law.
Getty Images

What will happen next?

The bill passed its first reading on Friday and there will be a second reading on Tuesday. It then goes to the Senate for further debate before it can become law.

An amendment drafted by the government and approved on Friday modified the article in question, 24, to add the phrase “without prejudice to the right to inform”.