Common threads link many attendees and promoters of recent anti-lockdown protests in the United States to far-right conservative groups, militias and conspiracy theorists.

Demonstrations against lockdown measures aimed at stopping the spread of coronavirus have been taking place across the United States, where more than 43,000 people have already died due to the virus.

Over the past week thousands of people, many of them supporters of United States President Donald Trump, have taken part in protests in several states against confinement measures, from New Hampshire, Maryland and Pennsylvania to Texas, Michigan and California.

Demonstrators – who were ignoring social distancing measures and some of whom were armed - said they wanted to return to work and were concerned their rights were being eradicated by draconian restrictions. While many protesters have said they are part of a grassroots movement, the rallies have been attended and promoted by far-right conservative groups, militias and conspiracy theorists.

The biggest anti-lockdown protest to date took place in Lansing, Michigan on 15 April, where about 3,000 people gathered.

Mr Trump appeared to tweet support for demonstrators in Michigan, as well as those in Virginia and Minnesota, where coronavirus lockdowns were imposed by Democratic governors.

Elliott Brennan, a research associate at the United States Studies Centre, said it was no surprise the "fringe" far-right groups were mobilising in those states.

“It’s no coincidence Trump and the shady underworld of the far-right have singled out those places," he said.

"They’re all crucial to Trump for his possible re-election in November and places where the Democrats can be made to see culpable for the afflictions people in those states are feeling as a result of the coronavirus.” 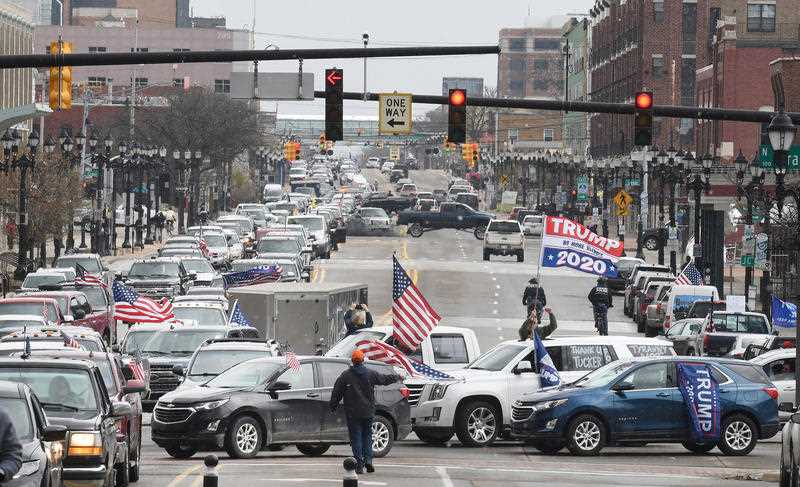 Vehicles sit in gridlock during a protest in Lansing, Michigan, Wednesday, April 15, 2020.
AP

Michigan's protest drew members from the Proud Boys, a far-right group accused of violence and racism in countries across the world.

Other organisations backing the protest were the Michigan Conservative Coalition and the Michigan Freedom Fund – both of which are right-wing lobby groups with links to the Trump administration - and gun-toting members of the Michigan Militia.

Demonstrators armed with semi-automatic weapons have been seen at other protests, carrying Confederate battle flags and pro-Trump paraphernalia.

Conspiracy theorist Alex Jones was photographed shaking hands with demonstrators at a rally in Austin, Texas. QAnon, anti-vaccination and 5G conspiracy theorists have also been present at various protests. Mr Trump has downplayed the danger associated with the demonstrations, saying many Americans have had their lives “taken away from them".

"These people love our country, they want to get back to work," he said.

Mr Brennan said the was "no real risk" of the far-right groups picking up momentum in the short term.

“These aren’t even traditional conservative groups. They are sometimes well-financed, but they are the definition of fringe,” he said.

“They’re merely the loudest group in the country at the moment. The streets are theirs, no one else is out.”

‘Not a mass movement’

Anti-lockdown demonstrators do not represent the views of a majority of US citizens, with a recent Quinnipiac poll showing more than 80 per cent of the country would approve a national stay-at-home order.

“It’s important to remember these protests are a very small number of people,” Mr Brennan said.

“It’s not in any way a mass movement.”

Several US states, including Michigan, Texas and Florida, have said they aim to reopen parts of their economies, perhaps by 1 May or sooner.

But health experts have cautioned that to avoid a second wave of infections as people return to work, extensive testing must be available to track infections.

More than 4.5 million people worldwide have been told or asked to stay home to fight the coronavirus.

Correction: This article originally incorrectly stated more than 4.5 billion people in the US have been told or asked to stay home. This has been corrected to reflect that the figure represents the number of people around the world given that advice, not just in the US.